At a symposium hosted on Sunday, October 18, 2020 by Achoja Research Council on “22 Years After the Idjerhe Pipeline Fire Disaster” under the theme “Farewell to Fossil Fuel Fatalities in Our Lands”, Nnimmo Bassey, Director, Health of Mother Earth Foundation (HOMEF), traces the genesis of the disaster that led to the loss of over 1,000 souls and suggests ways to avoid a future occurrence

Pipelines convey goods from one location to another. For example, pipelines are used to convey water to households in cities and other human communities. They can be used for irrigation purposes and for a variety of purposes.

However, today we remember the tragic pipeline fire that occurred at Atiegwo, near Jesse, Delta State, on October 17, 1998 killing over a thousand of community persons. The pipeline is a 16-inch petrol pipeline owned by the Nigerian National Petroleum Corporation (NNPC) and linking the Warri refinery to Kaduna. The fire raged for about five days and was eventually put out by American fire-fighters.

Without any investigation, the Petroleum Products Marketing Company (PPMC), a subsidiary of the state-owned NNPC, and the Military Government alleged that the cause of the inferno was sabotage. However, this charge was not substantiated. The oil companies and then military government were quick to blame the victims.

The basins that littered the death scene were interpreted to have been taken there by pipeline vandals to scoop spilled petrol. The military government of General Abdusalam Abubakar declared that no compensation would be paid, and the situation turned into one in which the surviving villagers became feared that they may be prosecuted. The fear led some families to prematurely discharge their relatives from hospitals, a situation that may have led to an increase in fatalities.

We repeat, the root cause of the conflagration is yet to be established, 22 years after the tragic incident. Twenty-two years is long enough to bring closure to this unfortunate incident.

A mother who lost her daughter, Eunice, in the inferno had this to say to environmental monitors that visited the scene:

“She said she was going to the farm. She left us happy. We were expecting some red cassava for dinner. She never came back. We saw the basin of the cassava. We saw the “karta” (head pad). We recognised our basin and her cloth. Her body we did not see. Her voice we did not hear. The fire took her from us.

They say we are vandals. How? Can Eunice be a vandal? It is the oil people who have been vandalising our means of livelihood. It is the government that has stolen from us and continues to do so even to this minute.”

What Caused the Fire?

Former Chief of Army Staff, Major-General David Ejoor (rtd), was particularly piqued by the massacre and addressed the press in strong terms. According to him, the evidence suggested that oil companies and the government caused the fire.

He said that “when the spillage became a general knowledge, the oil companies moved in to cover the cartel that was siphoning petrol from a joint valve near Idjerhe in tankers. Towards daybreak, the saboteurs failed to put the pipes back properly and hence the spillage of petrol.”

According to the general, the spilled products got into farmlands as well as into the Ethiope River. This attracted the attention of the community people. “People going to their farms discovered that they were wading in petrol instead of water. There was a rush to fetch the petrol from the farm and the floating petrol in the river.”

Eyewitnesses recounted that, five minutes before the fire, there was a Shell Petroleum Development Company helicopter hovering overhead and urging the people to evacuate the scene. Analysts believe that since the victims were mostly Urhobo, if the officer in the helicopter had shouted the information in their language, they would have escaped the tragedy. The interpretation of this is that the employment pattern in the companies is skewed against the oil field communities.

Moreover, General Ejoor stated that, after warning the people from the helicopter, “the officials followed up their threat with firing nerve gas at the crowd, which made it impossible for them to run. Those who attempted to run could not move their limbs with agility. The horror came; the place was set on fire with the intention of killing everybody and to prevent anybody from giving evidence.”

Many pipeline fires have been recorded in the Niger Delta. Some can be traced to poor facility management – including the non-replacement of corroded pipelines or those that had reached their optimal lifespans. Most pipelines in Nigeria are designed for a limited lifespan of 20 years. Other incidents have been traced to vandalism or oil theft.

Recently, the General Manager of the NNPC stated that oil pipelines in Nigeria are all compromised. That is a very troubling situation. It shows that pipelines can leak volatile petroleum products at any time.

Another worrying statistic came through when the NNPC stated that there were 45,347 pipeline breakages and/or explosions in Nigeria over the past 18 years. While speaking on this, the Group Managing Director of the NNPC, Mele Kyari, fingered pipeline vandalism and crude oil theft as major challenges for the oil industry for years and attributed this to “poverty in surrounding communities, community-industry expectation mismatch, and corruption.”

The analysis by the NNPC largely misses the point and heaps the blame on the victims, on the hapless communities. Crude oil theft is big business that requires technical knowledge and equipment, layers of security and other protections within the system to thrive. The theft has been said to be at industrial scale.

And, because the country does not really metre or measure the actual amount of crude oil extracted, the measure of the volume of crude being stolen daily remains in the realm of speculation.

The Nigerian Extractive Industries Initiative (NEITI) reckoned that Nigeria lost about $42 billion to crude oil theft in nine years. According to NEITI, about $38.5 billion was lost to crude theft alone, $1.6 billion on domestic crude and a further $1.8 billion was lost on refined petroleum products.

A top government figure once speculated that as much oil as is being officially exported is also being stolen.

One thing is clear, the humungous amount of crude oil could not be stolen by poor villagers or even by those engaged in bush refining. Indeed, it has been said that oil companies are involved in the business and that the international community is complicit.

Pipelines in Nigeria have largely been carriers of pipe dreams. Water pipelines are largely dry and those installed to convey crude oil to the refineries run largely empty as the refineries are comatose.

Lives and the Living

The loss of lives in the inferno of 1998 was, and remains, painful. However, we must not fail to mention that one regular blind spot associated with accidents of this nature is the lack of focus on what happens to the environment because of the incident.

The environmental assessment of Ogoni by the United Nations Environment Programme (UNEP) clearly illustrated the harms of irresponsible extractive activities in the Niger Delta. The report submitted to the government in 2011 and leading to the establishment of the Hydrocarbons Pollution Remediation project (HYPREP) showed that ground and surface waters in Ogoni were contaminated beyond acceptable levels.

Ground water was found to have benzene, a known carcinogen, at 900 times above World Health Organisation (WHO) standards. In some places, the hydrocarbon pollution had seeped into the ground to a depth of five metres. By the time remediation was carried out in 2020, the pollution had sunk down to a depth of 10 metres.

The National Oil Spills Detection and Response Agency (NOSDRA) announced that Nigeria recorded 1,300 oil spills between 2018 and 2019. This amounted to an average of five oil spills per day.

Not surprisingly, life expectancy in the Niger Delta is a paltry 41 years compared to an equally embarrassing national average of 55 years. The point we are making is that the living who survive oil fires remain in the grip of deadly pollution and their lives are thus highly discounted. For the living to have a fighting chance of living in dignity, the pollutions from the petroleum extractive activities must urgently be remediated across the Niger Delta.

There have been oil spill and pipeline fires across the Niger Delta over the past decades. The best way to honour the memory of our people that died in the fire of 1998 is to ensure that there is no repeat of such a horrific incident.

The steps towards achieving this include replacing all pipelines that have outlived their lifespans and are liable to corrode or leak. 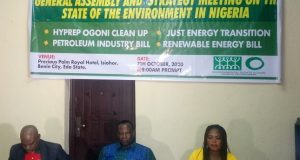 Some indigenes of Aboh in Delta State who reside in Abuja have appealed to the Federal Government ...