June 7, 2016 Comments Off on Why piecemeal approach won’t deliver on Ogoni clean-up 2,085 Views 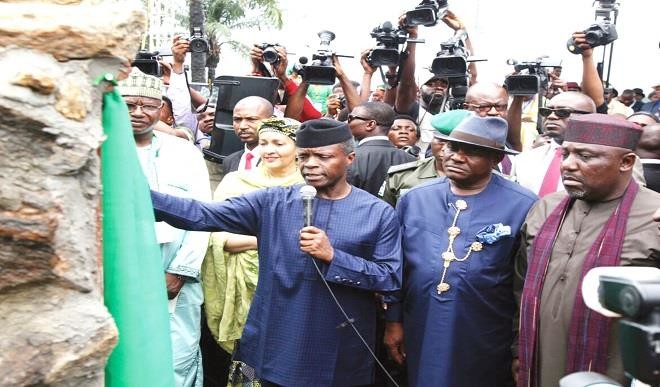 From right: Gov. Rochas Okorocha of Imo; Gov. Nyesom Wike of Rivers; Vice President, Prof. Yemi Osinbajo; and Minister of Environment, Mrs Amina Mohammed, during the launch of ‘Clean-up of Ogoniland and other oil-spill affected communities in the Niger Delta’ at Bodo Town in Gokana Local Government Area of Rivers State

Environmental degradation has been limited to narrow ethnic lens hence the polarity and lack of a national holistic approach to address them. Environmental challenges have been politicised along ethnic lines. The failure of natural resource management in Nigeria is the failure of governance in the lack of compliance and enforcement of the extant laws. To Go Wild for Life, we hereby make a strong call for Environmental State of Emergency in order to address the parlous state of the Nigerian environment.

In the North, desertification has ravaged the environment and livelihood sources hence the Fulani herdsmen are migrating in droves to the South in search of grazing vegetation for their cattle. The Fulani-herdsmen conflict persists, claiming lives and property due to scare lands for farming and grazing. In the south, deforestation, frequent oil spills and gas flaring have also ruined the environment and destroyed rural livelihoods and marine ecosystems. Persistent corporate impunity holds sway and this means that there is no environmental justice for the poor who suffer the impacts of environmental degradation most. Whether in the north or south the threat to rural livelihoods has resulted in natural resource conflicts and impoverishment of the local people.

Nigeria needs a new economic pathway that is not dependent on fossil fuels. The significant drop in oil pricing requires an alternative economic blueprint that is envisaged within a post petroleum economy for Nigeria. Let’s put a halt to the plundering of natural resources in the name of foreign exchange earnings. This has so far been counter to local production and consumption.

Two profile cases are worthy of mention: The Petroleum Industry Governance Bill 2015, and the implementation of the United Nations Environmental programme (UNEP) Assessment on Ogoniland Report.

First, the Petroleum Industry Governance Bill 2015 (PIGB) for oil sector reform currently before the National Assembly falls short of peoples’ expectation because it does not recognise local participation in the management of natural resources. The 10% equity devolved to the community in the previous Bill has been deliberately left out and environmental protection is not provided for. The Bill is not comprehensive and highly deceptive because although it anticipates other Bills, yet the timing, shape and content of such future bills are virtually unknown. The Bill should not be passed by the lawmakers unless the promoters put all the cards on the table in respect to other expected bills and incorporate critical views from the impacted communities and civil society groups.

On the implementation of the UNEP assessment and recommendations on the clean-up of the Ogoniland, we are pleased by the fulfilment of President Buhari’s pledge to implement the UNEP report with the public flag off of the clean-up process in Bodo City, Rivers State on June 2, 2016. But the Federal Government approach is rather shaky, piecemeal, lacking a holistic approach and without timelines for clean up. In August 2015, the government had promised $10m for commencement of the clean up of Ogoni, and an inauguration of the Governing Council to provide for an institutional framework to drive the process. Unfortunately, these warm words have not been implemented.

We urge a clear and unambiguous commitment on the part of government and Shell that this process will not be a repeat of its previous modus operandi where it had become adept at covering up oil spills instead of actually cleaning it. Almost five years on from the submission of the report (August 4, 2011), no clean up has taken place. Spill sites identified by UNEP remain heavily contaminated even after claims by Shell that it has carried out clean-up operations. The Ogoni environment is worse off, and the people are dying in droves on a daily basis in a place where life expectancy is shortest in Nigeria.

To reiterate, the high point of the president’s speech delivered on his behalf by Vice President, Yemi Osinbajo, was the approval he gave for the setting up of the structures such as the Governing Council and the Board of Trustees recommended for driving the clean-up process. But recall that the president had given the same approval in August 2015 for the constitution of the structures and nominations were made by different parties to the negotiation. One year on, that order had not been implemented. He has been forced to give another approval for the constitution of the same structures. From this trend, we see lots of motion with little or no movement.

Furthermore, the Gazette that would provide legal backing and clear delineation of the roles and responsibilities of various parties during the implementation process has not been scrutinised publicly nor signed into law and made easily accessible to the general public. We had called for the signing of the gazette to be one of the critical pre-launch activities with amendments such as removing Shell and other oil companies from the Governing Council because they could unduly influence the clean up process and frustrate the establishment of a full-fledged Ogoni Environmental Restoration Authority. The role of NOSDRA to have oversight functions over the clean up and supported by the UNEP technical team should be an opportunity to empower the agency because it neither has the capacity to detect oil spills nor respond to them. This means the immediate dissolution of Hyro-Carbon Pollution Restoration Project (HYPREP).

Some questions are left unanswered. When will the actual clean-up of Ogoni commence, and when will environmental justice be done such as compensation for lost livelihoods as recommended by the UNEP report?

The Theme of the 2016 World Environment Day is Go Wild for Life. Nigeria can emerge stronger by curbing oil-dependency, breaking free from fossils, and embracing renewable energy sources that are decentralised, non-grid and socially controlled so that individuals and communities are co-producers of energy and share in the benefits. The option of leave the oil in the soil means taking an alternative pathway to sustainable development that is powered by renewable energy, the protection of ecosystems and biodiversity. For Nigeria’s environment and economy, let’s Go Wild for Life.

The Federal Government should: