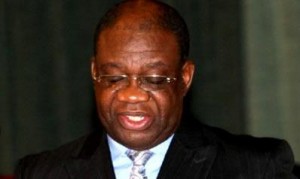 He lamented that 120 million Nigerians – representing about 75 per cent of the population – do not have access to electricity. The minister attributed the present challenges to vandalism, unprecedented systems collapse and heavy storms that shattered transmission lines in some states that destroyed four transmission towers.

While a considerable number of Nigerians are in response to the nemesis climbing down the energy ladder – moving from electricity, gas and kerosene to fuel wood and other traditional biomass energy forms, a lot more have turned to the use of generators as an adaptive measure.

Indeed, as at 2006, says a report, over 60 million generators were being imported annually into the country, while about N1.6 trillion was spent to fuel the generators. The implication is that the nation has become a dumping ground for all sorts of generating sets from all over the world; the business of generator sales, servicing and fuelling is booming, and the device has become a part of us.

No wonder both the supposed solutions to the impasse addressed in this piece have to do with the almighty, life-saving machine. Ironically, they were fabricated by teenagers – and aimed at eliminating the use of fuel (petrol, diesel) and probably make the generator more environment-friendly and less expensive to operate.

But, while one invention has been formally celebrated globally, the other appears virtually unknown.

Recently, two teenage girls invented the urine-powered generator, which seeks to provide affordable and sustainable energy sources as a solution to the epileptic power supply in developing countries without the attendant consequences caused by carbon poisoning. 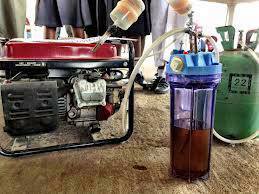 The inventors, Duro-Aina Adebola and Zainab Bello from Doregos Private Academy in Lagos, won the United Technology Company (UTC) Award for Excellence in Science and Engineering and prize money of $3,000 in scholarship.

The device works on the principle of electrolysis and energy conversion. The direct current (DC) output of the generator is connected to the urine electrolytic cell, to ensure continuous production of the hydrogen-oxygen which ensures the continuous running of the engine. The exhaust gas from the generator is water vapour and non-toxic, compared to carbon monoxide from the conventional carbon-based fuels.

The other is a fabrication by a roadside technician who fixes cars and motorcycles’ electric fittings in Makurdi, Benue State. Nineteen-year-old Christopher Chinedu Okorie, a staff of Innoma Auto Electrical in the Benue State capital, is the inventor of a generator that operates only on battery.

Incidentally, Okorie is not educated and holds only a primary school leaving certificate. But that apparently did not deter his initiative to devise a concept to aid in power generation purely with the desire to cut down the cost of running a generator on fuel.

Asked how he got the idea, Chinedu said he was just thinking of how to use other means rather than fuel to generate power when the idea came to him. According to him, his constant work with batteries as he charges them for both cars and motorcycles drew his thought to their ability to run a generator motor and armature to produce electricity.

He stated that he made the prototype of the electric generator using the engine of a portable fuel generator commonly known as “I pass my neighbour” with a motor. According to him, he used a more powerful motor to pair with the generator engine which gave him an 8-point power output which, according to him, is enough to run two television sets, a clipper, a radio, and light point.

“If you want it to carry more, you will increase the capacity of the motor and battery then. If it is a big generator, it will be 20 points and can power television, pressing iron, fridge and water pump,” he explained.

Commenting on the cost of producing an electric generator, the electrician said he can make an 8-point generating set for N45,000. Queried on the high cost in comparison to a similar type that runs on fuel which sells around N15, 000 in the open market, Okorie said he is incapable of producing the sets now at a cheap rate unless he gets help from the government or other corporate bodies or manufacturers which will subsidise the cost.

He explained that his invention, which is yet to pass the test of professional electrical engineers, would help the society by reducing the noise of generators, curb the use of fuel and thus environmental pollution.

The girls hope to partner with larger companies to produce the alternative generator on a mass scale, although some describe it has being too bulky, expensive and unrealistic to solve Nigeria’s electricity challenges.