Residents of Kaduna in northwest Nigeria, especially those living close to the Kaduna Refining and Petrochemical Company (KRPC), have expressed reservations over a potential health hazard posed by gas flaring from the nearby refinery. 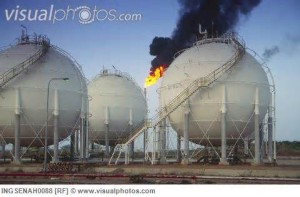 The smoke emitted by the refinery’s chimneys, according to them hovers over their area and goes beyond 10 kilometers in radius, affecting many residents in the southern axis of the city.

A resident who lives close to the refinery, Nasiru Suleiman, said the gas which is being
flared on a daily basis has saturated the area and is causing serious health concern to the locals.

“It smells badly,” he remarks, adding:

“The emission of the carbon dioxide is a serious disaster on our part. In the morning, the gas always descends on the whole environment, making it difficult for us to breathe; it is also the same thing in the evening. And it has a very powerful and unbearable odour; if we are eating, it is as if we are swallowing the substance along with the food.”

Another resident, Jacob Zango, expressed fear that if immediate measures are not taken by concerned authorities, “the residents might not be able to bear it for long.”

“We are calling on government and management of the KRPC to take immediate action to stop this flaring, because what we are inhaling in this place is poisonous and is capable of killing us,” laments Zango.

Managing Director of KRPC, Bolanle Ayodele, who acknowledged the act, said they are concerned over its effect on both humans and the environment, and are working towards minimising the black smoke being emitted. He was however quick to say that it was not possible for the company to stop gas flaring completely.

“We are aware of this problem and, very soon, we will correct it because we are also concerned about the environment.”

Nigeria is the largest oil producing country in Africa and the sixth in the world. More than 40 years after oil refineries were established in Nigeria, gas flaring still persists despite known health and environmental hazards.

Gas flaring is not peculiar to Kaduna; it is more common in the Niger Delta region where cities like Warri and Port Harcourt also experience the same hazards. Experts estimate that Nigeria currently flares between 1.3 and 1.4 billion cubic feet of gas per day. This is only second to Russia which flares three times the size of what Nigeria burns.

The gas being flared is a constituent of crude oil which observers say can be efficiently utilised as a valuable source of energy, but it is being continuously burnt and worsening the case of global warming.

Although subsequent administrations in the country have set up laws and datelines to stop the flaring, the oil firms have opted to paying fines instead of adopting modern technologies to end it.

A report by Justice in Nigeria Now (JINN), a non-governmental organisation (NGO), says since 1969, the dateline to stop gas flaring has been shifted more than five times. An environmentalist, Aisha Okunade, discloses that the damage of gas flaring on the environment, land, water habitat and humans cannot be quantified. She stresses that although adequate research has not been concluded on the effects of gas flaring on humans, the effects are sometimes visible on people residing in areas close to refineries. The sign and symptoms, according to her, include vomiting, cancer diseases, lung diseases and Asthma.

The emitted gases, she adds, include nitrogen oxide, carbon monoxide, carbon dioxide, sulphur and nitrogen oxide, which mostly combined with rainfall to cause damage to soil. She calls on the Nigerian government to allocate enough funds to research institutions for a comprehensive research on such gases. The concern on the flaring and environmental degradation has led to many mass movements and activism, especially in the Niger Delta region.

In 1995, a renowned novel writer and activist, Ken Saro-Wiwa, was executed by the Nigerian government for oil-related activism on the environment.

Despite the hue and cry, Nigerian government has not taken notable steps at impressing on the oil companies to stop the practice. Early last year, a United Nations Environmental Programme (UNEP) Report indicted the giant Shell Oil Company operating in the Niger Delta region for contaminating the soil and environment of Ogoniland in the past 50 years.

The Federal Government said it would clean up the area, but that is yet to commence.

Scientists have designed a cutting-edge device to precisely measure...