As representatives of governments and city authorities of over 100 countries discuss the future of the world’s urban centres in the Italian city of Naples (between 1 and 7 September 2012), Amnesty International has called on all government delegates at the Sixth World Urban Forum (WUF6) to respect the right to housing and stop forced evictions. 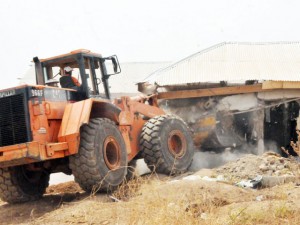 Officials of the organisation are attending the WUF6 to raise awareness about, according to them, the injustice of forced evictions as well as the obligations of national and local authorities to uphold the right to adequate housing.

In a related development, the United Nations Human Setllements Programme (UN-Habitat), organiser of the WUF6, having signed to the International Aid Transparency Initiative (IATI), is resolving to publish all its project and programme information openly online in 2012.

The portal is tagged “Open UN-Habitat” and the WUF6 transparency project was launched on Tuesday.

The IATI aims to standardise IATI open aid data reporting and is the internationally recognised standard with over 70 publishers, including UN agencies, national governments and the World Bank.

The launch showcased a number of pilot projects, but the full project portfolio will not be available until year’s end.

Previous: ‘How on earth did we agree to the Bali Action Plan?’
Next: Fresh disaster lurks as Cameroon plans release of water from Lagdo Dam

The Lagos State Government has demolished all shanties and illegal structures on Lekki coastal road which ...