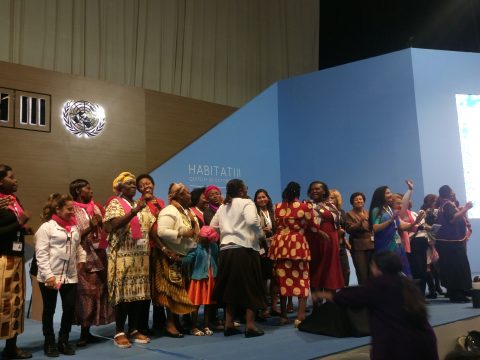 Participants at the Women Assembly in Quito

The daylong event that held a week ago at Habitat III in Quito, Ecuador was organised by the Huairou Commission in collaboration with UN Women and UN-Habitat and addressed opportunities for empowerment of women and increased gender equality through the New Urban Agenda. As the only male speaker during the day, Joan Clos, Executive Director of UN-Habitat, encouraged the participants to implement the New Urban Agenda around the world: “We have still not achieved true gender equality on any front, in any city. We still have work to do.

Jan Peterson, Chair of Huairou Commission, emphasised: “Women’s Rights are about implementation on the ground, in our cities.”

Linking the New Urban Agenda with the Agenda 2030, Lakshmi Puri, Deputy Executive Director of UN Women, brought attention to the inclusion of transformative change regarding gender relations, sexual and reproductive rights and the elimination of violence against women as important issues in the New Urban Agenda. Now the implementation must make sure no one is left behind.

In the afternoon, nine breakout sessions discussed diverse issues such as safer cities, land and property rights, resilience and climate change, post conflict and migration, rural-urban linkages, political participation, economic empowerment and urban planning. Some of the recommendations from the participants include:

Aisa Kirabo Kacyira, Deputy Executive Director of UN-Habitat, assured the participants in the Women Assembly that UN-Habitat is committed to work for increased gender equality and encouraged everyone to look towards the future. What change do we want to see in the next 20 years, before Habitat IV?

She stated: “Teamwork and leadership are needed to implement the New Urban Agenda as a people led process to achieve change.”

Ana Falu, co-chair of the Advisory Group on Gender Issues to UN-Habitat, encourage the participants to continue during Habitat III to engender the New Urban Agenda.

Towards the closing of the event, Pamela Ransom, a participant, exclaimed: “I have never seen such a diverse group of powerful women together in one room as in this Women’s Assembly!”