West Africa faces up to an environmental crisis

People in West Africa are confronting enormous environmental problems, and Canada isn’t part of the solution, writes David Israelson, a writer and consultant based in Toronto 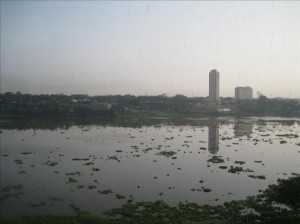 Lots of people who fish complain about their catch, but Abdulahi Traore has good reason.

“We don’t catch what our families can consume for a day,” he says, pointing to a plastic box holding a few tilapia in his pencil-shaped dugout canoe. After fishing for nearly 10 years in the estuary, called the Ebrie Lagoon, offshore from Abidjan, Ivory Coast that is home to some 3.5 million people, it’s not only the catch that’s getting worse — the water is too.

It’s easy for Canadians to overlook environmental problems like this 100-km West African lagoon, a rich, soupy sea that contains some 150 species of shellfish, but also some of the world’s nastiest pollution. We’re not exactly setting a great example with our own water and coastlines.

I found out how little I knew about West Africa — and how much there is to learn — when I conducted a workshop for journalists on behalf of th United Nations Environment Programme (UNEP) here.

I also tried to learn what Canada is doing to lend a hand — not much.

For years we have all been told to think globally, act locally when it comes to the environment, but focusing on either the big picture or our own backyards can draw our attention away from important regions that are under stress, like this coast.

The question is, when it comes to the environment, is Canada thinking at all?

UNEP administers an international agreement called the Abidjan Convention, drafted in 1984 and signed by 22 countries that have a collective population of some 400 million. The signatories, from Mauritania to South Africa, share some 14,000 km of coastline, agreeing to co-operate on research, marine protection and an action plan for keeping the coastline clean.

When we toured we learned how the water is contaminated with sediment, raw sewage, detritus from cargo ships and tankers, industrial waste and garbage. One section of the estuary is a ship graveyard, where stripped-down hulls of abandoned vessels were left to rust and rot.

The estuary’s natural cleaning agents, mangroves, are disappearing. Farther off the West African coast, many areas are overfished. Foreign factory trawlers drop explosives near the continental shelf, scoop up the fish and leave.

The local public is exposed to cholera, typhoid and other diseases in part from the marine pollution, says Ivorian environmental specialist Thierry Mangle, who accompanied us on the harbour tour. He fears “an ecological catastrophe” — it’s not that nothing is being done, it’s just that much more is needed.

Why should we care in Canada? It’s important because the world really is getting smaller.

What used to be local or regional environmental problems are now capable of reaching across continents; the 21st century is becoming the century of the environmental refugee.

What should we do? It doesn’t take much. The Swedish International Development Agency sponsored the journalists’ program I conducted, and another Swedish non-governmental group is working with local people on cleaning their part of the lagoon.

Where is Canada? I wish I knew. What I do know — and the Africans know too — is that our environmental reputation is being sullied, and we’re the culprits.

It has been degraded by a federal government that attacks environmental groups at home and which has weakened our own water pollution laws, shut down research, silenced government scientists and failed by most measures to address climate change.

No one expects Canada to be a leader in regional environmental issues such as West Africa’s marine pollution. But people here do notice who shows up, and it’s not us.

This is a time when we should be building bridges in emerging markets, and there’s a growing market for environmental cleanup technology. But it’s hard to be competitive when you have a bad reputation at home — it can reach around the world.

People here are trying to build a network of experts who can share information and work on solutions — journalists, environmental scientists, community workers and UN officials.

They face daunting challenges — they’re not always well paid and they meet political obstacles and in many cases, repression. They want to build a network of people to share their stories and their experiences with each other and with the world.

Which should leave Canadians asking — what kind of environmental story do we have to share?

The Federal Government is planting about 10 million trees...

Eleven years after it was created, the Hydrocarbon Pollution...