February 7, 2017 Comments Off on As UNESCO-IHE brings water journalists, researchers together 694 Views

For over 20 years, Ishraga Abbas has practiced professional journalism in Sudan – one of the most water-stressed countries on the earth, where she has had an ambiguous relationship with water researchers. 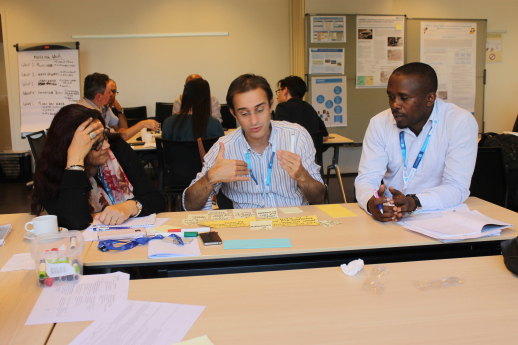 She actually does not remember teaming up with any water researcher to work on a water story based on the researcher’s findings. In the answer to the obvious question – why hasn’t she been collaborating with water researchers? She says: “Some researchers shy away from journalists. They prefer communicating their findings to their fellow researchers only.”

This ambiguous relationship can perhaps even trace its roots back to journalists. Some journalists misrepresent the researchers’ facts; lack exposure to water issues or simply are not interested in covering the multifaceted water issues.

This subsequently manifests itself, as neglected coverage of water stories. But, a new project – Open Water Diplomacy Lab – has kicked off targeting bringing journalists, water scientists and researchers together.

Among others, Open Water Diplomacy Lab addresses the needs and demands of water journalists in terms of facilitated access to potential sources of information – getting scientific research on water communicated in an accessible and ready to use, meeting and working with water researchers and water diplomats – and opportunities to support and promote media coverage on water issues. The project focuses on the Nile basin and it is funded by the Dutch Ministry of Foreign Affairs “Global Partnership for water and development”.

“First, we are going to study how Nile issues are communicated in both mainstream and social media in Ethiopia, Sudan and Egypt. Building on the research findings we will develop join training activities for journalists and scientists coming from the Nile countries. Finally, they will be pulled together to work at original projects to promoted shared narratives about the Nile, overcoming the mainstream national interest perspective,” explains Emanuele Fantini, Senior Researcher at UNESCO-IHE and project coordinator.

He was speaking at the kick-off workshop that had “Mapping Nile controversies: Media, science and water diplomacy” as its theme. It held in Addis Ababa, Ethiopia in January 2017.

Now, journalists like Ishgara – who actually attended this workshop – say this project will boost the quality of water journalism in the Nile basin.

Likewise, Dagim Terefe, an Ethiopian journalist and documentary maker, states that Open Water Diplomacy Lab project will help to give birth to a generation of journalists that specifically concentrate on investigating River Nile issues.

Such journalists, as Dagim notes: “Will no longer write the story of the sharing of Nile waters with a nationalistic thinking as it is now but an informed broader context that caters for other countries where the Nile meanders.”

True. This is a responsibility journalists in the Nile basin cannot simply walk away from. It makes sense to believe that journalists have a crucial role to play in ending the Nile wars between countries that share this longest river on the planet.

Actually, Wondwosen Seide, a doctoral student at Lund University in Sweden, who has been researching on the River Nile issues for the last 10 years, believes that Nile wars are: “Mainly in the media landscape than on ground.”
According to Wondwosen, this project is: “Very crucial in bridging controversies and contradicting reporting among the riparian states.”

Against such a background, Open Water Diplomacy Lab will truly breed journalists that can help researchers and agencies working on the Nile to disseminate the story of the Nile.

Having story of the Nile in the media, as Dr. Wubalem Fekade, the head of the Social Development and Communication Unit at the Eastern Nile Technical Regional Office (ENTRO) of the Nile Basin Initiative (NBI) based in Addis Ababa contends, would: “Help decision and policy makers in the Nile basin to make very enlightened and bold decisions that contribute to sustainable management of the river.”

It is easy to understand that water is a strategic resource for livelihoods. This is the reason why Atta el-Battahani, a Professor of Political Science at the University of Khartoum, contends that: “It is important that we know about it so that we can manage it very well for the benefit of the people.”

Scientists have been asked to simplify information about their work and technologies for the public ...