To coincide with the 2015 Earth Day observed on Wednesday, April 22, over 500 new city actions, showcasing a wealth of inspiring climate action, are being featured on a UN-hosted website, with the aim of building momentum for the upcoming global climate agreement in Paris. 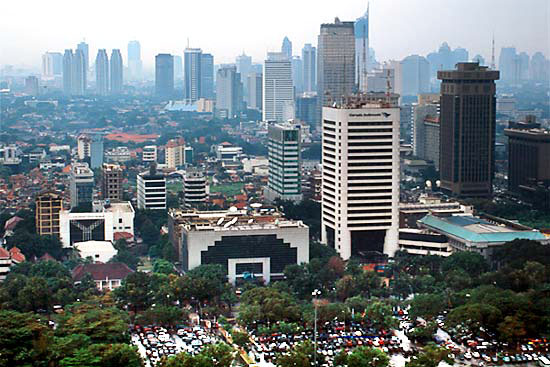 Jakarta, Indonesia. One of the over 500 cities featured in the portal. Photo credit: tripsgate.com

Actions and targets, communicated by cities ranging from Amsterdam, Rio de Janeiro to Yokohama, range from increases in energy efficiency and deployment of renewables to green procurement and adaptation action.

It is demonstrating the sheer wealth of climate actions of key non-state actors including municipalities, regions and investors in order to inspire others to raise their ambition in support of the new universal climate agreement.

Cities produce around 70% of energy-related emissions and their activities to reduce these while building resilience are crucial for supporting governments as they publish and prepare their climate plans for the coming years and decades.

Many cities are also highly vulnerable to climate change, especially those on or in the vicinity of coastlines: while many have also seen the link between combating climate change and transforming the urban infrastructure and environment into a healthier and more economically dynamic place.

Christiana Figueres, Executive Secretary of the UN Climate Convention (UNFCCC), said:  “Nations will come together to sign a universal agreement on climate change at the UN Climate Conference in Paris in December. By demonstrating action on NAZCA, cities can support and catalyse ever higher ambition by governments while signalling their determination to be part of the transformation towards a healthier, safer and more secure world. We are grateful for the collaboration with CDP, the carbon Climate Registry, the Compact of Mayors and others, and we look forward to showcasing more climate action from cities in the future.”

Many of the cities who have submitted information to the portal are showing leadership by setting science-based targets to ensure that the world will stay below the internationally agreed limit of a maximum 2 degrees Celsius global average temperature rise.

According to the best available climate science, the world needs to peak global emissions in the next decade to successfully address climate change, triggering a deep de-carbonization of the global economy.

Jakarta intends to reduce CO2 emissions from government operations by 30% from 2005 to 2030 through sustainable building standards and retrofits, energy efficient lighting, solar-powered streetlights, and landfill gas capture and power generation.

The city data presented on the NAZCA portal was reported to CDP’s cities programme <https://www.cdp.net/cities> – which forms part of CDP’s global environmental reporting system – and the carbon Climate Registry <http://carbonn.org/>.

CDP and the carbon Climate Registry are established, credible sources with a strong track record of reporting and tracking progress that the NAZCA portal draws data from. In particular, their regular reporting cycles will enable future progress on actions to be updated to NAZCA in the future.

The cities being featured are part of an ongoing process to showcase climate actions from non-state actors. In the run-up to the UN climate change conference (COP 21) in Paris, information on climate actions from cities, businesses, investors and subnational regions will be continuously added to the NAZCA portal.

Many of these actions are happening in partnership with governments, organisations and international bodies, including the United Nations. Three such actions joining NAZCA today are the Compact of States and Regions, the Carbon Neutral Cities Alliance, and the Compact of Mayors.

Michael R. Bloomberg, the UN Secretary-General’s Special Envoy on Cities and Climate Change, said, “Cities are helping to lead the way in addressing climate change. I congratulate the cities making their pledges public and transparent through the Compact of Mayors and NAZCA. It’s a crucial step that will help show nations that setting and achieving ambitious climate goals really is possible.”

The Portal is also showcasing several inspiring initiatives under the Lima-Paris Action Agenda. The agenda is designed to catalyse action on climate change by governments and non-state actors before 2020, when the new global agreement is to take effect, and after 2020. Many of these initiatives emerged from the UN Secretary-General’s Climate Summit last September <http://www.un.org/climatechange/summit/about/>. These include the Low-Carbon Sustainable Rail Transport Challenge; Removing Commodity-Drive Deforestation from Supply Chains and the Global Energy Efficiency Accelerator Platform.

The Paris-Lima Action Agenda <http://www.cop20.pe/en/18732/comunicado-sobre-la-agenda-de-accion-lima-paris/> was agreed at the end of last year by the Peruvian COP 20 Presidency, the incoming French COP 21 Presidency, the office of the UN Secretary-General and the UNFCCC secretariat.