Switzerland aims to reduce greenhouse gas emissions by 50% relative to 1990 levels by 2030. At least 30% of this reduction must be achieved within Switzerland itself. The rest may be attained through projects carried out abroad. These objectives were approved by the Federal Council in November 2014 as part of the definition of the negotiation mandate for the climate conference in Lima and were made public on Friday. Switzerland will announce its commitment to reduce emissions by 50% to the United Nations Framework Convention on Climate Change (UNFCCC). 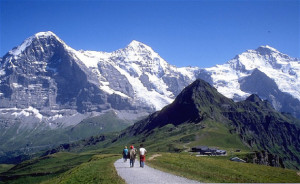 A new international climate agreement which will involve all States from 2020 is due to be concluded at the climate conference to be held in Paris in December 2015. All Member States of the UNFCCC are required to state their commitments for the post-2020 period in advance of the Paris summit.

Switzerland’s target for 2020-2030 is also compatible with the pathway defined by climate experts to keep climate warming below two degrees between now and the end of the century.

At national level, a draft revision of the CO2 Act will be submitted for consultation in mid-2016.

Greater commitment for the climate

In line with the measures already implemented at national level, Switzerland emits less greenhouse gases today than in 1990 despite the fact that gross national product increased by 36% over the intervening period. Switzerland fulfilled its emissions reduction target for the first commitment period under the Kyoto Protocol (2008-2012).

This commitment has been increased for the period 2013-2020. The CO2 Act prescribes a reduction in greenhouse gas emissions of 20% by 2020 to be achieved through domestic measures. The instruments established to fulfil this target include the CO2 tax on heating fuel, the reduction in CO2 emissions from new cars, the obligation for fuel importers to compensate for some of the CO2 emitted by transport and the Buildings Programme.

A clear, transparent and understandable commitment

According to the decisions adopted by the climate conference in Lima, the commitment to be announced by the States for the post-2020 period must be clear, transparent and understandable. Switzerland has provided information under each of the seven key points identified in Lima which ensure the clarity of its commitment:

Reference point for the calculation of emissions reductions: 1990

Period for implementation: up to 2030

Processes: a draft revision of the CO2 Act will be submitted for consultation in mid-2016; the proposed measures will mainly aim to reinforce existing measures.

Assumption and methodology: Switzerland’s commitment is based on the existence of emissions certificates which meet high quality criteria and are sufficient in quantity. The effect of forests will be taken into account. The methodology for non-forest land remains to be developed.

Adequacy of the commitment

Contribution to the objective of the Convention (increase in temperature of less than two degrees): the reduction target of -50% relative to 1990 levels is compatible with the recommendations of the IPCC of -40 to -70% below 2010 levels by 2050.

Objective in the context of the two degree pathway

According to the objectives defined by the Federal Council for 2030 and 2050, i.e. -50% relative to 1990 and -70 to -85% by 2050, per capita annual emissions must reach 3 tonnes of CO2 equivalents per year in 2030, and between 1 and 2 tonnes of CO2 by 2050. Hence Switzerland’s targets lie within the ambitious average of the climate experts’ (IPPC) recommendations for 2050. This emissions development is also in line with the Federal Council’s long-term objective of reducing per capita emissions to one or one-and-a-half tonnes.