Switzerland on Friday became the first Party to the UN Framework Convention on Climate Change (UNFCCC) to submit its new climate action plan. 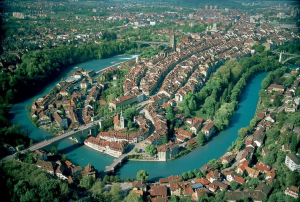 Switzerland’s Intended Nationally Determined Contribution (INDC) comes well in advance of a new universal climate agreement to be inked by governments at the UN climate conference in Paris in December.

The new agreement will come into effect in 2020 and will pave the way to keep a global temperature rise this century under 2 degrees C.

Governments have agreed to submit their INDCs in advance of Paris with many developed and bigger developing countries expected to do so in the first quarter of this year.

The news from Switzerland comes in the wake of a meeting in Geneva where countries also finalized the negotiating text for the Paris agreement. The next round of formal negotiations will take place at UNFCCC headquarters in Bonn, Germany in June.

INDCs have been chosen as the vehicle for national contributions to the international Paris agreement–they include for example details of emission reductions the country will undertake and can include other action plans covering for example adaptation.

Christiana Figueres, Executive Secretary of the UNFCCC, said: “Switzerland is today demonstrating leadership, commitment and its support towards a successful outcome in Paris in 10 months’ time – it is the first but will not be the last. Momentum towards Paris is building everywhere. I look forward to many more INDCs being submitted over the coming weeks and months.”

Countries have agreed that there will be no back-tracking in their contributions. This means that the level of ambition to reduce emissions will increase over time. The negotiating text from Geneva also signals the ambition among many governments for a long-term goal to dramatically reduce greenhouse gas emissions over the century.

According to the UNFCCC, the INDC of Switzerland, along with additional information such as documentation on designing and preparing INDCs as well as on sources of support for INDC preparation, will be available here: http://unfccc.int/focus/indc_portal/items/8766.php