May 26, 2017 Comments Off on Stakeholders task government on framework to implement climate change policies 983 Views

Stakeholders in the environment sector have called on the federal government to create what they describe as a holistic institutional framework for the implementation of climate change policies in the country. 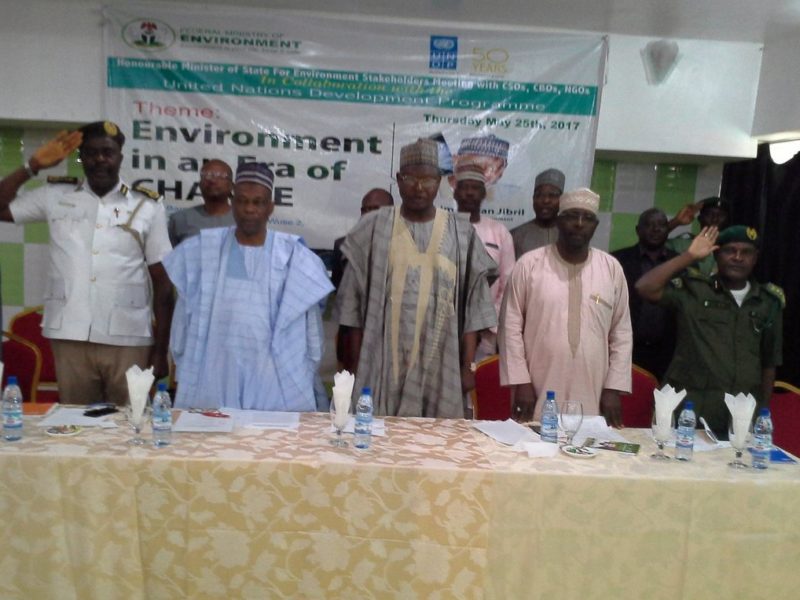 Environment Minister of State, Ibrahim Jibril, with some dignitaries during the “Environment in an Era of Change” forum in Abuja

This is contained in a communiqué issued at the end of a one-day stakeholders’ meeting of Civil Society Organisation (CSOs) and Community-Based Organisations (CBOs) in the environment sector with the Minister of State for Environment, Ibrahim Jibril, in Abuja on Thursday, May 25, 2017.

Themed: “Environment in an Era of Change,” the forum appeared to be well attended by CSOs, NGOs, CBOs, FBOs,  development partners as well as other critical stakeholders operating in the environment and development sector from the six geopolitical zones of the country.

The meeting was aimed at facilitating stakeholders’ consultations on environmental issues, challenges and prospects in Nigeria and to engender interaction between the Environment Ministry and other stakeholders in the formulation of durable environmental agenda and roadmap towards repositioning the Nigerian environment.

Other objectives of the meeting include to stimulate policy dialogue on the environment among relevant stakeholders within the various strata of the society that will foster sustainable economic development in view of Nigeria’s efforts to diversify her economy and employment generation to the teaming rural communities, and also to facilitate the adoption of strategies to fast-track the Green Economy initiative through Public Private Partnership (PPP) Programme of the government towards implementation of the country’s programme.

The meeting was also aimed at providing an update on government policy action on environmental governance; seeking inputs of CSOs into the implementation of government environment programme and create the platform for continued engagement between government and the CSOs.

The communiqué also called for more awareness creation on the effects of land degradation and other environmental challenges in the country.

It also tasked the federal government to, among other things, emphasis on review and update of some environmental laws that are obsolete.

Other issues raised by the communiqué include the need for enhanced advocacy by CSOs in promoting effective environmental management; the need for the Environment Ministry to push for support from state governments for more collaboration in areas of sensitisation and the environment sustenance awareness embarked upon by CSOs, who urged for more collaborative support from the ministry.

Speaking, the Minister of State for Environment, Ibrahim Usman Jibril, disclosed that the meeting was convened in order to provide a platform to brief the CSOs, NGOs, development partners and other critical stakeholders on the efforts to reposition the Environment Ministry in delivering its mandate.

This, according to him, would engender contributions of the stakeholders to further reposition the environment sector in view of the Sustainable Development Goals and the change vision of the President Muhammadu Buhari-led administration.

While charging the stakeholders to raise critical issues that would bring rapid development of the environment sector, the Minister said: “I do hope that this gathering will stimulate policy dialogues on the environment among various strata of the civil society with the goal of fostering partnership and collaboration for sustainable economic development in view of Nigeria’s efforts to diversity her economy and employment generation.”

Earlier in his address of welcome, the Permanent Secretary in the Ministry, Dr Shehu Ahmed, noted that governance in the environment sector can only achieve sustained result and become more effective with the active support and partnership of the CSOs, NGOs and other development partners.

He called for a regular interface and sharing of ideas between the ministry and the stakeholders so as to ensure a rapid development of the sector.

By Michael Simire and Hassan Danmaryam

Some states in the South-South Geopolitical Zone in Nigeria have decried the huge ecological problems, ...