A Dutch appeals court has ruled that Royal Dutch Shell can be held liable for oil spills at its Nigerian subsidiary. The decision overturns a ruling by a lower court in 2013, which found the parent company could not be held liable. 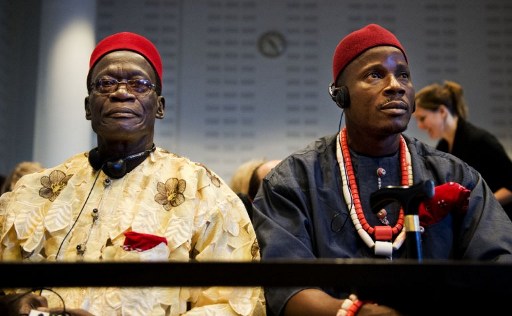 Two of the four Nigerian farmers (Chief Fidelis A. Oguru-Oruma (left) and Eric Dooh) sit in the law courts in The Hague on October 11, 2012. The four farmers take on Shell in a Dutch court, accusing the oil giant of destroying their livelihoods in a case that could set a precedent for global environmental responsibility. Photo credit: AFP / ANP / ROBIN UTRECHT

Observers believe that the ruling, passed on Friday (December 18, 2015), could open the way for more cases against the multi-national company.

Judges in The Hague ordered Shell to make available to the court documents that might shed light on the cause of the oil spills and whether leading managers were aware of them.

The legal dispute dates back to 2008 when four Nigerian farmers and campaign group, Friends of the Earth, filed suit against the oil company in Netherlands, where its global headquarters is based.

“Shell can be taken to court in the Netherlands for the effects of the oil spills,” the court ruling stated on Friday.

“Shell is also ordered to provide access to documents that could shed more light on the cause of the leaks.”

Judge Hans van der Klooster said the court had also found that it “has jurisdiction in the case against Shell and its subsidiary in Nigeria”. The case has been adjourned till March for hearing.

The ruling was hailed by rights groups as a victory for victims of environmental pollution worldwide, while Shell said it was disappointed.

For instance, the Environmental Rights Action/Friends of the Earth Nigeria (ERA/FoEN) welcomed the court ruling, urging other Niger Delta communities to institute similar action against the company for years of pollution.

Shell’s Nigerian subsidiary, Shell Petroleum Development Company of Nigeria Ltd (SPDC), said in a statement: “We are disappointed the Dutch court has determined it should assume international jurisdiction over SPDC.”

“We believe allegations concerning Nigerian plaintiffs in dispute with a Nigerian company, over issues which took place within Nigeria, should be heard in Nigeria,” it said.

Shell has always blamed the leakages on sabotage which under Nigerian law would mean it is not liable to pay compensation. But the Dutch court said on Friday: “It is too early to assume that the leaks were caused by sabotage.”

“The ruling is unique and can pave the way for victims of environmental pollution and human rights abuses worldwide to turn to the Netherlands for legal redress when a Dutch company is involved,” Friends of the Earth Netherlands said in a statement.

Four farmers and fishermen, backed by Friends of the Earth, first filed the case against Shell in the Netherlands in 2008, demanding a clean-up oil spills in their communities, prevention of further spills and payment of compensation for the ruins caused by Shell.

In January 2013 a lower Dutch court threw out most of the lawsuit, saying the communities could not hold Shell’s parent company in Netherlands responsible for the pollution which has for years ruined their environment.

At the time, the judges said Shell’s Nigerian subsidiary was partly responsible and ordered it to compensate farmers and fishermen in one claim, in Ikot Ada Udo in Akwa Ibom State, but not in the three other claims from Oruma community and Goi in Bayelsa and Rivers respectively.

Describing the landmark ruling, Geert Ritsema of Friends of the Earth International said: “There is now jurisprudence that means victims of human rights violations or pollution can sue Dutch multinationals in the Netherlands”

ERA/FoEN Executive Director, Godwin Uyi Ojo, said: “Today, we have recorded yet another victory for communities that have been under the yoke of Shell. This ruling sets a landmark precedent that opens the doors for impacted communities to sue Shell in Netherlands for the negligence of its subsidiaries in their part of the world.

“Shell would have preferred that this controversy dragged for eternity until the farmers become weary and give up, but the decision of the appeal court has turned the table on them. The resilience of the farmers will earn them victory”

Ojo recommended that other impacted communities now take their destinies in their hands, even as he added that “we firmly believe that justice will finally be served for communities tossed here and there by Shell’s attempts to evade justice in communities where it pollutes with impunity.”

According to Ojo, the case of the four Nigerian farmers is only the tip of the iceberg. “For decades, Nigeria has been the stage of the largest oil spill on earth. Over the years, an amount of oil double to that of the sinking of the Deep Horizon in the Gulf of Mexico in 2010 has leaked into the environment. A 2011 report published by the United Nations Environment Programme (UNEP) shows Shell doing far too little to clean up the leaked oil.”