As three consecutive Olympic Games move to East Asia, the headquarters of the Green Climate Fund (GCF), the link between sports and sustainability is increasingly unfolding. 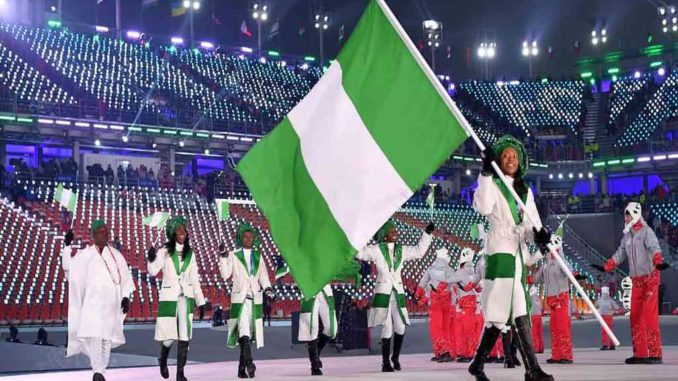 PyeongChang 2018: Nigeria makes a debut at the Winter Olympics. Flag bearer, Ngozi Onwumere, and teammates during the opening ceremony

The Republic of Korea’s first hosting of the Winter Olympics, preceding the 2020 Summer Olympics in Tokyo and the 2022 Beijing Winter Olympics, is accompanied by two key fora harnessing the global spirit of the Games to address planetary environmental challenges.

Many of the dignitaries that attended the opening ceremony of the Winter Olympics in PyeongChang on Friday, February 9, 2018 reportedly took part in these two important discussions.

The PyeongChang Forum, named after the Republic of Korea county where the 2018 Winter Olympics are staged and organised by the Governor of Gangwon Province, shared ideas on forming a “new solidarity for the Earth and its citizens.” The second, the Global Engagement and Empowerment Forum, organised by the Bank Ki Moon Centre at Yonsei University, focused on ways to attain the Sustainable Development Goals by “putting people and planet at the centre.”

Both the PyeongChang and the Global Engagement and Empowerment fora, billed as preliminary events of the 2018 Winter Olympics, held in Seoul on Wednesday, February 7 and included the sharing of ideas between global experts on how to integrate climate action with sustainable development.

Speaking at the PyeongChang Forum, GCF Executive Director, Howard Bamsey, said the Olympic Games and climate action share a common denominator, with both reminding us we are all global citizens.

“While the winter athletes will test their prowess against each other bonded by the Olympic spirit, it is also possible for nations to come together and develop their economies in ways that are sustainable,” he said.

Mr Bamsey emphasised GCF’s key supportive role after taking part in a plenary session at the Global Engagement and Empowerment Forum where he described how climate change adaptation and mitigation can serve the 2030 Sustainable Development Goal pledge to leave no one behind.

“A number of innovative projects in the GCF portfolio show clearly that creative avenues exist where environmental protection and economic development can be compatible,” he said.

Other keynote speakers at these fora included Antonio Guterres and Ban Ki-Moon, respective current and former Secretaries General of the United Nations.

The GCF was set up by the 194 countries which are parties to the United Nations Framework Convention on Climate Change (UNFCCC) with an initial pledge of over $10 billion. Headquartered in the Republic of Korea, the Fund has a growing portfolio of 53 projects, currently valued at $2.6 billion, which support low emission and climate resilient development.

With the world’s attention focused on the winter sport athletes gathered in PyeongChang, a recent study indicates only eight of the 21 cities that previously hosted the Winter Olympics will be cold enough to reliably host the Games again by the end of the century.

The Board of the GCF is set to meet at the end of February to consider further projects to expand its portfolio of support for developing countries.