The Environmental Rights Action/Friends of the Earth Nigeria (ERA/FoEN) has described the proposed Bill to Provide for the Management, Protection and Sustainable Development of the Environment in Lagos State as a document laden with ambiguities to mask its privatisation plans in the water sector. 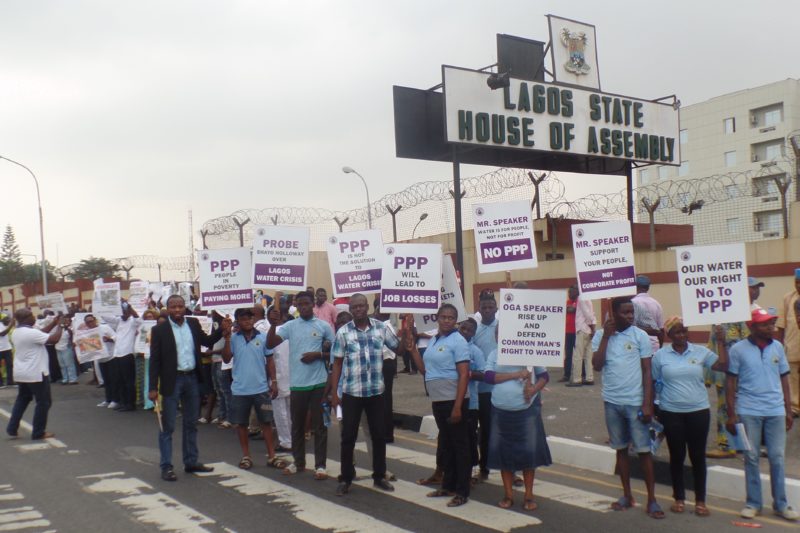 Officials of ERA/FoEN leading protesters at the Lagos State House of Assembly premises in Alausa, Ikeja, venue of the Public Hearing on the proposed Lagos Environment Law

At a Public Hearing organised by the Lagos House Committee for Environment at the House of Assembly Complex in Alausa, Ikeja on Thursday, February 9 2017, ERA/FoEN faulted sections of the proposal which it viewed as attempts to sneak public private partnership (PPP) into the water sector. The sections include: Allocation of Fund and Guarantees, Sinking of Borehole Hydraulic and other Structures, Maintenance of Water Bodies, Functions of the Office and Powers to Make Regulations.

Deputy Executive Director of ERA/FoEN, Akinbode Oluwafemi, said: “We are shell-shocked at the the proposed law as it is fraught with deliberate loopholes that will open the door for the corporate take-over of Lagos water, the sanitation sector and, ultimately, the state.”

Oluwafemi explained that, under Allocation of the Fund and Guarantees that provides that the state government will secure payment in respect of contracted services and concessions for long term infrastructure investments with an Irrevocable Service Payment Order as the first line charge on the Internally Generated Revenue is scandalous. Literally, the Lagos government is saying it must pay these corporate entities before spending on roads, schools, hospitals, water, etc.

“This is absurd,” he remarked, added that the provision also stated that, “In the event that the State’s IGR is insufficient or unavailable to discharge its obligations, it will apply monies due to it from the monthly allocations from the federal account to secure its payment obligation to the contractors and concessionaires”.

The ERA/FoEN memorandum also carpets the clause that states that members of The Trust Fund Board to be set up will have six members, two of which will be from the Ministry of Environment, and the Commissioner for Environment being its chair. It noted that the Commissioner will have too many powers under the law as he will also be tasked with making regulations.

In the provision that criminalises Sinking of Borehole Hydraulic and other Structures and recommends prison terms and fines for defaulters, the group was of the view that Lagos residents currently using these means to access water are only victims of a system that failed to provide them a basic human right.

“What logic justifies banning people from using streams or helping their neighbours who cannot access safe water due to inadequate investment from the state government for decades? Yet, this obnoxious provision is in the law.”

The ERA/ FoEN boss explained that if it goes unchallenged, these measures would further burden Lagos citizens at a time that the government has no clear and articulated plan to fix the public water system, adding: “Our fear is that this pressure on Lagos citizens could be the guise to introduce the PPP in the water sector which Lagosians have roundly condemned.

In addition to the memorandum submitted, ERA/FoEN also provided them with copies of the document – “Lagos Water Crisis: Alternative Roadmap for the Water Sector” which it launched last October as solution to the water crisis in Lagos. 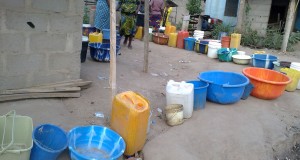