A non-governmental organisation (NGO) based in Abuja, Connected Development (CODE), has listed drawbacks being experienced by a project aimed at curbing desertification in Nigeria and neighbouring countries. The group however unfolded measures it hopes to undertake to realise the scheme’s potential. 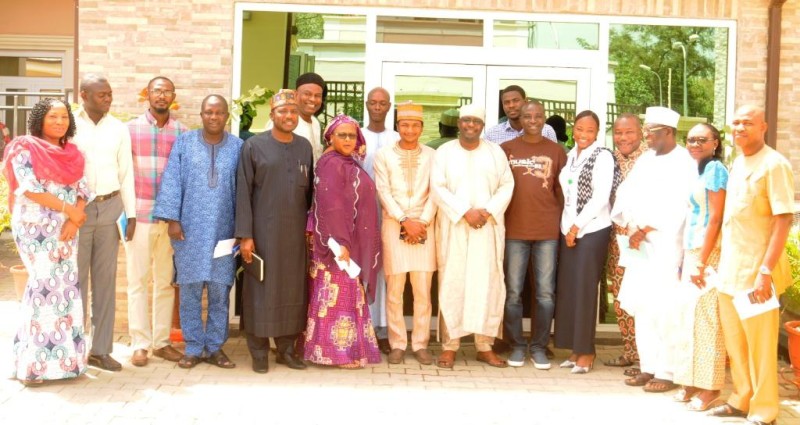 Officials of CODE, Follow The Money, as well as the DG and senior staff members of the NAGGW after the advocacy visit/meeting

The Great Green Wall (GGW) scheme brings together Nigeria and several other countries to grow a wall of trees across the continent to literally hold back the Sahara Desert – albeit with a swathe of greenery that will lessen the effects of desertification and improve the quality of life and livelihoods of communities.

CODE’s Chief Executive, Hamzat Lawal, during a recent visit to the offices of the National Agency for Great Green Wall (NAGGW), disclosed that a team of officials of “Follow The Money” – an initiative being implemented by CODE – visited communities in the northern states of Kebbi, Kano and Jigawa in order to ascertain what was obtainable on the ground.

Lawal, who told the Director General of the NAGGW, Goni Ahmed, that the purpose of CODE’s visit to the agency was to discuss the framework of implementation of the GGW project, said: “We visited Bachaka in Kebbi State, Kadandanni in Kano State and Jeke in Jigawa State. All three communities had water challenges, nurseries are dying and this is because either the boreholes are broken, not functioning properly or some parts were missing.”

Replying, Ahmed said the office was initially a project implementation unit under the Federal Ministry of Environment before it was formally established as an agency in May 2015, adding that the idea was for it to be a community based agency. According to him, himself and his team started with 92 communities and are currently in 138 communities.

“The communities are the sole beneficiaries of the GGW project, so they have to be involved,” stressed Goni, even as he underlined the importance of having the state governments support the project and provide land as well as funding from their Ecological Fund allocations.

His words: “For example, the Governor of Katsina State assisted the project by giving a directive that GGW should be provided with land.

“The agency identified all the communities they are working in are having high rate of poverty and lack access to water. The idea behind the windmill and solar powered boreholes is because the communities cannot sustain a borehole powered by generator or electricity due to the power challenges in the country.

“The agency is new and we are learning from our mistakes and making amends. We are committing to ensure all three communities as you have reported are budgeted in our plan and water provided within the shortest period of time and we would improve security around the boreholes as we are now putting up lights in all locations.”

The DG further stated that the agency is still in the process of setting up its bank accounts, but that because of the TSA, the process is slow. But he is confident that, by next month (March), the agency would be up and running.

“We promise to be open, transparent and accountable to every kobo received on behalf of the NAGGW. I run an open door policy and would appreciate if you engage us more and do feel free anytime to call on me or visit the office for any information at all on our activities,” he told the visiting CODE team.

Lawal stated: “CODE hopes to work with the agency to hold town-hall meetings with the communities as we are working to provide a platform for interaction between the locals and the agency in order to make the project succeed. To make the communities take ownership of the project, CODE is currently finalising plans with our media partners to air a programme on the GGW and also plans to establish a community radio as well, so that the communities can be reached and get enlightened on the GGW project.

“CODE is also planning to work with the GGW agency to have a stakeholders meeting in Abuja, where different key stakeholders will be invited to discuss how to make the GGW project succeed. Everyone is aware of the budget allocation but no one talks about the releases and constraint around the GGW.

“CODE is also hoping to have an expert meeting where CODE and NAGGW can pull resources together and bring someone from the international community for a one- or two-day workshop on Re-greening Nigeria and the NAGGW can take the lead on that. CODE has identified an expert who has worked on this issue around East and West Africa.

“Lastly, CODE is planning to build a tool in collaboration with NAGGW that will be an independent tracking system on the progress of the project, because CODE has discovered that nobody is talking about the achievements of the GGW project. The plan is to gather data using the tracking system and then use the data to inform both the communities and the general public, and most importantly policy makers, in terms of how we will be able to show the results and then advocate for more budget allocation for this intervention.

“We are hoping that your Agency will own this tracking system and commit to using it; where we can then commission state monitors independently who will send reports and feedbacks. We hope to engage the communities involved in the GGW to document their findings by sending reports via the Tracking system before engaging the larger society/stakeholders. The essence of this initiative is to create a feedback loop between the communities and the implementing government agencies.”

Expressing his appreciation towards CODE, Goni said the visit has reinvigorated his belief in the role of NGOs who, according to him, “play an important role in the society, and when a credible NGO goes out to put up a case, people will believe them more than the government.”

He disclosed that NAGGW is planning to convene a stakeholders meeting probably in March where the President, state governors and other government agencies will be invited to showcase the GGW project. “The plan is to outline the role and responsibility of every institution in respect to the GGW project, which was lauded in Paris during the COP 21 meeting, and Africa was seen to be taking charge of her own problems by herself,” said Ahmed.

In Nigeria, the GGW aims to address desertification, enhance natural resource management and promote ecosystem integrity in the dry-land in the Northern parts of the Country. The Nigerian Project stretches from Zamfara and Kebbi states in the North West corner along the northern border of Nigeria to the extreme eastern border in Borno State. Eleven States are involved in the project.

The GGW, an initiative spearheaded by African heads of state, will stretch about 7,000 from Senegal in the west to Djibouti in the east and will be about 15 Kilometres wide as it traverses the continent, passing through Mauritania, Mali, Burkina Faso, Niger, Nigeria, Chad, Sudan, Ethiopia and Eritrea.

The programme aims to support the efforts of local communities in the sustainable management and use of forests.