Scientists have said that the global changing weather pattern as well as the warming of the earth is responsible for the events that led to the deadly ocean surge that effected Lagos last week. The incident left about 10 people dead and several others missing. 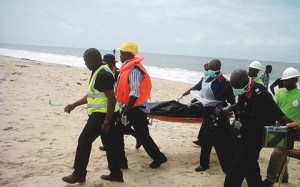 Rescue officials attending to the dead

According to the experts, earth warming, which is the outcome of the removal of the planet’s natural shield from the harmful rays of the sun, is raising global temperature and causing ice in the Polar Regions to melt, thereby swelling the ocean and resulting in sea level rise.

Chairman, Nigeria Environment Study/Action Team (NEST), Prof. David Okali, said that ocean surge is prominent at this time due to water current from the Western Atlantic as a result of the El-Nino factor which, he submitted is not peculiar to Nigeria.

El-Nino is a climate pattern that causes extreme weather (such as floods and droughts) in many regions of the world.

A climatologist who lectures at the Ahmadu Bello University, Zaria, Prof. Emmanuel Oladipo, stressed that a temporary solution would not ease the effect of ocean in Lagos in particular and Nigeria in general.

He called for a comprehensive study of the nation’s coastline dynamics that would help understand the marine morphology of the country. He posited that climate change effect due to sea level rise would be better tackled through a marine research on an integrated coastal management zone.

The Professor of Climatology urged the Federal Government to put in place an effective adaptation mechanism, even as he clamoured more finance in the area of research to enable the Nigeria Institute of Oceanography and Marine Research (NIOMR) function effectively.

According to him Nigeria would be able to combat the effect of climate change due to sea level rise which causes ocean surge more effectively through proper and adequate marine research.

Environmental activist, Titi Akosa, said that climate change is a global environmental challenge and that the Lagos State Government should put in place mechanism that would help the people adapt to its effect.

She said, “The early warning signal for disaster being announced by the government is not enough. If you instruct the people to relocate due to expected excessive rain and its effect in flood prone areas, where do they relocate to? All these are issues the government should begin to work towards. All these demolition and eviction is not good for the image of the state and even Nigeria as a whole. This would affect growth and development.”

The National Emergency Management (NEMA) has however described the incident as a natural disaster, but that the human-casualty was self-inflicted.

NEMA’s Director of Planning Research and Forecasting, Dr. Charles Agbo, said: “While the Atlantic Ocean surge is a natural phenomenon, the human casualty was attributed to man-induced disaster when humans engage in activities close to or on the sea without precautionary measures in place.
“The ocean surge at Kuramo Beach and other areas of Lagos was a natural phenomenon while the human casualty could be blamed on carelessness of people living too close to the danger of the coastline when early warning alert were raised by appropriate authorities on the effect of climate change and global warming.”

According to him, an assessment of the Lagos coastline by a team of NEMA officials has revealed that more beaches might be affected by wave tide.

But some of the residents who were evicted insist that the ocean surge was caused by the Eko Atlantic City project being championed by the state government. According to them, the sand filling at the Atlantic Ocean for reclamation of land is putting pressure on communities along the Lagos coastline.

Another group of residents disclosed that the government has been trying to evict them because it nursed plans of sell the land to private investors.

General Manager, Lagos State Emergency Management Authority (LASEMA), Dr. Femi Oke-osanyitolu, said that the residents and business operators on the beach were illegal occupants and not meant to be there.

He noted that the demolition and eviction of the residents were done for their good because the state government wanted to avoid more casualties from a possible future occurence.

On the issue of compensation for the displaced people, he emphasised that there would be no compensation or relocation as he advised them to go elsewhere to look for a better place for accommodation. He claimed the people were sensitised a long time ago on the need to leave the area but they chose to erect structures and make them permanent places of abode.

Previous: Being a Good Samaritan in Lagos
Next: Propertymart’s City Park Estate 1: The rules have changed