In his welcome words at the Oilfield/FishNet Dialogue at Gbarain, Bayelsa State on Friday, June 4, 2021, Nnimmo Bassey, director of Health of Mother Earth Foundation (HOMEF), laments that many fish species are endangered and some already going extinct due to constant pollution

The Niger Delta has several freshwater and marine ecosystems like rivers, lakes, streams and creeks. Before the onslaught of six decades of unrelenting oil pollution, there was an abundance of fish species in both freshwater and marine ecosystems in the Niger Delta. Today, many of these fish species are endangered due to constant pollution and some are already going extinct.

The head of Shell oil company was recently quoted as saying that the Niger Delta no longer suits their business model. On this account, he said they were moving from onshore to the deep waters offshore. They are going offshore in order to avoid responsibility for their continued environmental misbehaviour in our communities. They are heading offshore after committing ecocide onshore. They are shifting offshore after sucking the land dry and trashing whatever they came across. Above all, the hopes of our fishers remain in the fish that pollution has driven offshore and now the polluters are threatening to take their business there.

If transnational oil companies replicate their prodigious pollution offshore, the fishers, the peoples and communities of the Niger Delta will be totally stranded on both land and sea. That is the definition of disaster. Besides shifting pollution offshore, our fishers will face the hazards of security forces cordoning off oil installations and at the same time be confronted by the largely unchecked activities of sea pirates.

While talking of sea pirates, we must not forget the activities of illegal fishing fleets scouring and sweeping our continental shelf. Their nefarious activities are known to be heavily depleting the fish stock in the Gulf of Guinea. Added to the reported sale of a protected coastal territory to the Chinese by the Sierra Leonean government for the establishment of fish meal factories, we can be sure that they will literally make mincemeat of what remains of the fisheries of the region.

It is time for the Economic Community of West African States (ECOWAS) to wake up and call sleepy littoral nations in the region to order. Colonial extraction of resources, whether fish, minerals or timber must be halted and the interest of our fishers and communities protected.

Today, we sit on the shoulders of Taylor Creek. For years we have heard of reports of oil spills in this beautiful Creek that was once teeming with fish. We can imagine what a joy it was for our people going to fish with traps, nets and other gears and returning with bountiful catch. Today, the stories are tainted by oil spills, gas flares and toxic wastes and are largely different from what it used to be before the oil rigs plunged into the belly of our land.

We believe that fishers are the custodians of vital cultural values. Our fishers are frontline protectors of our aquatic ecosystems. They are also the first to be affected when the ecosystems are damaged. They are equally in the best position to monitor and report these harmful incidents and insist on remediation and restoration as well. They must stand with our communities to insist that even if the oil companies sell their onshore fields to Nigerian firms, they must retain their liabilities.

Our people must refuse to be dribbled by companies that are driven by nothing but profit. There are reports of transnational oil companies selling onshore facilities to Nigerian firms and simply walking away from the mess they had created. We hear that they claim that they had sold everything and questions should be directed to the new “owners.”

When communities turn to these new “owners,” they claim they know nothing of old pollutions and that the question must be directed to the company that had walked away.  Communities must refuse to be stranded by being treated as pawns by corporations that care for nothing about the environment and the people.

Our future is connected to the sea. We are concerned about the future of our people as oil and gas business begins to fade as the world transits from dirty energy to clean energy. We need the transition, but in the process, new harms must not be offloaded on our peoples. Government has a responsibility to quickly review its business approaches in the sector and ensure that the operators bear due responsibility for ecological destruction wreaked on our territories. Government must also support our fishers with fishing equipment, modern landing points, processing facilities and fish markets.

As the petroleum civilisation slides into its twilight zone, or injury time, a mapping of the ecological devastation in the Niger Delta must urgently be carried out. This must be followed by a Niger Delta wide clean up and restoration exercise, with special attention paid to the Taylor Creek. There is no better way to mark the 2021 World Environment Day than to commence a complete detoxification of the Niger Delta. We cannot afford to imagine a Niger Delta without fish. 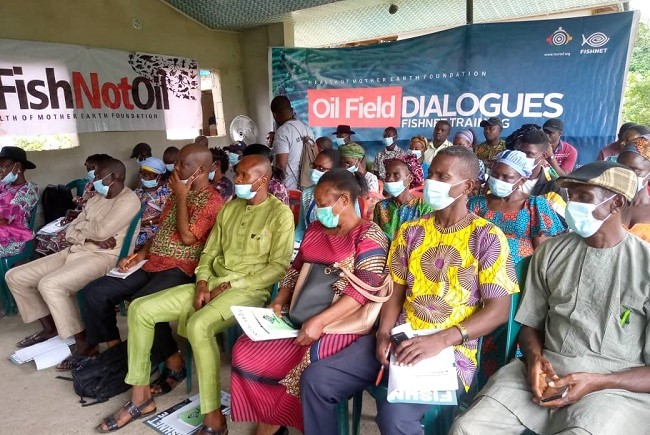 An environmentalist, Dr Nnimmo Bassey, has urged oil firms in the Niger Delta to clean ...