Mysterious statue of Satan with a massive erection appears in city 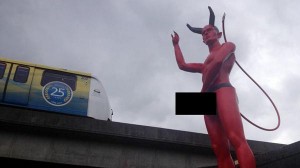 A statue of Satan standing proud with a huge erection has been swiftly taken down by city officials in East Vancouver.

It was on display near the Clark Drive SkyTrain station – raising hell with shocked commuters.

But it didn’t last long, and was removed hours later.

The small square where the devil appeared was originally home to a statue of Christopher Columbus, but that has since been moved to Hastings Park, report CTV News.

Ukraine invasion: EU to replace gas from Russia with Nigeria’s

The European Union (EU) Delegation to Nigeria and ECOWAS...

Bayelsa State Government has called for better collaboration with...