December 5, 2014 Comments Off on Meteorologists warn of El Nino over East Africa 1,008 Views

Few days after the Intergovernmental Panel on Climate Change warned of worst climate ahead, East African Meteorologists have moved to issue El Nino alert over the region. 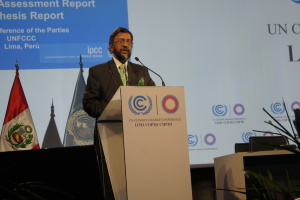 Uganda National Meteorology Authority is calling for preparation of the members of the public for the occurrence of the adverse weather event. According to the alert, El Nino is expected to occur between December 2014 and February 2015.

El Niño is a weather condition characterised by unusually long rainfall conditions with the possibility of flooding and landslides.

Jackson Rwakishaija, the Acting Executive Director Uganda National Meteorological Authority, says there are adequate factors putting the probability of occurrence at up to 70 percent. He says the Pacific Ocean has shown renewed signs of El Nino development in recent weeks adding that, above average temperatures in the tropical Pacific Ocean typical of El Nino conditions have warmed further in the last fortnight.

The World Meteorological Station concurs with the authority. It says the Southern Ocean Oscillation Index has generally been in excess of El Nino thresholds in the past three months. According to Rwakishaija, not all factors responsible for development of El Nino have been satisfied. He says regardless of whether or not El Nino fully develops, warmer than average tropical Pacific Ocean temperatures combined with cooler waters currently observed to the north of Australia increases the chance of El Nino like impacts over the East African region.

Rwakishaija concludes that this suggests above average rainfall during the month of December and January over Uganda. The authority warns that when the predicted El Nino comes, it will be stormy accompanied by strong winds and sometimes hail stones. Uganda’s capital Kampala has been experiencing heavy rains in recent weeks that resulted into flooding. El Niño conditions tend to occur once in every five years.

The last severe El Nino in Uganda occurred in 2006, causing massive flooding in Teso, Lango and Acholi regions. Mountainous areas like Sironko, Kapchorwa, Mbale, Bundibugyo and Kabale face the increased risk of landslides during severe El Nino. The Alert comes as the Intergovernmental Panel on Climate Change has warned the world of the worst climate conditions ahead.

Dr. Rajendra Kumhar Pachauri, the head of United Nations Intergovernmental Panel on Climate Change (IPCC), told negotiators at the Lima climate talks that the increase in temperatures observed in 2014 is much more than any observed in the last 10 years. Currently, planet earth is experiencing a phenomenon known as global warming of 0.8 Celsius degrees increase in temperature.

The increase climate scientists warned is bad enough to trigger many adverse weather conditions across the world. The cautions have triggered a series of coordinated actions including reductions in emissions of industrial greenhouse gas to prevent the temperature increase hitting the 1.5 Celsius degree mark by the end of the century.

Back in the East Africa region, the Kenya Meteorological Department has also reported that there will be enhanced rains in many parts of the country till next year.

James G. Kongoti, the acting Director of Kenya Meteorological Services and permanent representative of Kenya at the World Meteorological Organisation (WMO), says the October to December season indicates that much of the country is likely to experience enhanced rainfall.

The findings have been consistent with earlier measurements. In August, the Kenya Red Cross Society (KRCS) appealed to the national and county governments to adequately prepare for the El Nino rains expected by October this year.

KRCS Chief Executive Officer Abbas Gullet said with the rains experienced in recent weeks, signs were clear that Kenya will have El Nino rains later this year. “We already know the October-November short rains will have an El Nino effect. The rains we have been getting a few weeks ago are freak rains which are a precursor to the main El Nino,” he cautioned.

“How prepared are we all the time… whether it’s a county government or a central government? So we don’t want to be shocked when we see those pictures,” he warned.

According to Gullet – whose society has been at the forefront in providing humanitarian aid in drought or flood hit areas – the El Nino warning should be taken seriously right from the national government to the counties to alleviate the effects that come with heavy flooding.

In October, United Nations scientists urged preparation for weather-disrupting El Niño phenomenon which they said recur after every two to seven years. They said the warming of parts of the Pacific Ocean in 1997-98 changed the patterns of the wind and moisture overhead, resulting in severe weather around the world.

The climate disaster that swept through the horn of Africa region also affected Kenya. It was blamed for thousands of deaths in storms, heat waves, fires, floods, frost and drought. Property damage was at least $32 billion.

“The 1997-98 event was a wake-up call,” said Michael Glantz of the National Center for Atmospheric Research in Boulder, Colo.

“Awareness of what El Niño can do to societies and economies is now high,” said Glantz, a longtime El Niño researcher and senior author of the report. According to the UN scientist, the government of Peru saved the day when it formed a task force to coordinate activities and went to the World Bank for money to clean up rivers and canals and shore up bridges and roads a head of the 1997-98 El Nino.

On the other side of the coin, he said, Kenya had the forecast in June of 1997 and the government didn’t act on it. “When heavy rains came, roads collapsed, train routes collapsed, bridges, etc.,” he said.

It may be that the forecast influence of El Niño on Kenya was less clear to officials, he said, but by organising regional groups to prepare and increasing education this can be overcome.