The African Group of Negotiators on Climate Change has urged developed countries to ratify an extension of the second phase of Kyoto Protocol (KP). They say the developed nations must show leadership in tackling climate change effects by ratifying the binding treaty. 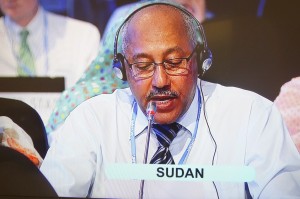 Chair of the African Group of Negotiators, Nagmeldin G. Elhassan

Nagmeldin G. Elhassan, the Chair of the African Group of Negotiators, says ratifying the second commitment period is the only way Africa and developing nations can take the developed countries seriously on commitments to reducing greenhouse gas emissions.

Elhassan says by ratifying the agreement, the developed countries will build confidence among African countries suffering the brunt of climate change that they are committed to reducing the suffering of the people due to climate change.

“We would like to encourage all parties to speedily ratify the second commitment period of the Kyoto Protocol to show progress under the new legal agreement under the Durban Platform for Enhanced Action (ADP). That will be amicable to all parties. But what we have observed is annex 1 party is reneging, abandoning and weakening the commitment of the Kyoto protocol.”

Ratifying the agreement legally binds rich nations responsible for industrial pollutions to cut their emissions of climate-damaging greenhouse gases under specified targets of 15 to 30 per cent by 2020 and 60 to 80 per cent by 2050.

They can either do this obligation directly or indirectly by helping developing countries with the required finance for capacity building, adaptation, mitigation and technology transfer among others.

Though the second commitment period of the Kyoto Protocol – an international treaty that is binding on industrialised countries to reduce GHG emissions – began in 2013, it is not yet ratified by many developed countries. So far, only 14 countries from developing and developed nations have signed and ratified the treaty.

In Doha (Qatar) in 2012, the following countries agreed to a further commitment period under the Kyoto Protocol: Australia, the EU, Croatia, Iceland, Liechtenstein, Monaco, Norway and Switzerland.

Samual Samson Ogallah of Pan-African Climate Justice Alliance (PACJA) says the non-committal stance of annex 1 countries to the treaty and other historical obligations accounts for the frustrations African group and the civil society keep experiencing in various COP meetings.

Ogallah says such frustrations and shifting of goal posts led to the civil society walkout from the 2013 COP Meting in Warsaw, Poland. He encouraged the African negotiators to press forward without relenting.

The appeal comes at a time the Intergovernmental Panel on Climate Change (IPCC) is warning of the worst climate ahead. Dr. Rajendra Kumar Pachauri, the IPCC chair, told delegates in Lima that the case for prioritising action on climate change was clearer than ever before but not much is being done to reduce global temperature.

He said the Fifth Assessment Report (AR5) uncovered the fact that mankind was responsible for the increase in air and sea temperatures, now responsible for adverse impacts across all continents.

The report says the oceans have absorbed most of the extra heat that has been observed over the last 10 years, leading to a general rise in water temperatures.

Elena Bardram, head of the EU’s international carbon market unit, says the developed nations will continue complying with earlier commitments to addressing challenges of climate change. She says Finance will continue being consolidated as required to tackle some of the challenges in additions to implementing carbon emission cuts.

Previous: Meteorologists warn of El Nino over East Africa
Next: ‘Selling off forests is business for Peruvian government’