The Makurdi floods have become some sort of a tourist attraction for many residents of the Benue State Capital. 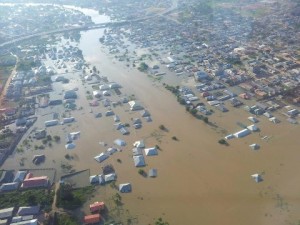 After much persuasion from family members to pay a visit to the worst hit part of the town by the floods, I drove my two boys, cousin, uncle, aunty and an in-law through the grid-lock Wurukum Roundabout area where they started their sightseeing from the flooded motor parks.

We gradually braved the tortuous but useful bumps along the Makurdi-Gboko Road area of the Benue State University and made our way to Gyado Villa, also known as Ichar Ihyar. From that point, my family members became dumbfounded on the extent of damage caused by the floods.

As we alighted from the car at Kutcha-Utebe to join the horde of sightseers at the new River Benue Bank (pedestrian way) opposite former RCC Camp, I saw the sign boards around Kyabiz Hotel submerged along with the hotel.

We crossed over the highway to the other side and, behold, a large boat came rowing towards us with passengers who had gone on a trip from the new River Benue Bank through the flooded streets of the area. When they dropped anchor, I decided to go on the trip too. My six-year-old son quickly opted to go along with me when my uncle and cousin wanted to tag along but were scared. As for my aunt and in-law, they dreaded the idea of going on the boat ride and stayed back. At that point, my four-year-old son who was initially scared, mustered courage and said, “Daddy, I want to go too.”

As I and my family clambered into the solid boat that was hitherto used to convey sharp sand from the river, the boat finally pulled out into the river for the ride that cost N50 per person. I then made my way to the other end where the boatman was steering, so that I would get to chat with him.

On enquiry, the boatman, who simply identified himself as Zaki (Alias Mai Engine), told yours truly that, although he is a fisherman, he is also into several other trades, especially water-related ones. He went on to tell me that, contrary to the belief that they are making brisk business by ferrying people across the flooded areas, the floods have rather affected their previously booming fishing business.

According to him, a litre of fuel costs N130, so it is still difficult for him to conveniently make much gain. However, he plies the trade to make ends meet as well as satisfy the curiosity of people eager to take boat rides across the flooded areas. He added that he has been ferrying people and even ferried cars from the flooded areas since the floods came.

A look at the depth of the water and the strong current as we rowed past former occupied homes which were submerged up to the roofs, I asked Zaki if he thinks the water would recede anytime soon and he warned, “Oga, this water fit dey here till January next year o.”

As we made our way back to the new River Benue Bank, I wondered how the flooded areas which used to thrive with residents and businesses now thrive on a different form of business – a tourist attraction. That brought one thought to mind: that one man’s woe is truly another man’s fortune.

The beehive of ferrying activity there is not without the usual patronising hawkers of sachet water popularly known as “pure water” and other little edibles such as nuts.

In a chat with one of the tourists, Helen Ikyarsha, she said although she was scared, she had wanted to see the hippopotamus and crocodiles said to have been sighted in the area at the beginning of the floods. Six-year-old Jesse Daga too, after the trip, expressed disappointment on not seeing a hippopotamus.

Another tourist, who stood at the edge of the river, Mrs. Juliet Agbo, told this writer that she thinks the boat rides will help people to come to terms with the extent of damage caused by the floods and thereby learn to appreciate future warnings of impending disasters.

“It is frightening how a once inhabited place has suddenly been wiped off by water,” she added.

Meanwhile, a tourist who pleaded anonymity stated in a lighthearted manner that, with the amount of money collected by the boatmen as charge for a sightseeing ferry, the Benue State Internal Revenue Service (BIRS) may as well come in handy to collect tax.

It will be recalled that the Makurdi floods, which came early September when the Lagdo Dam in Cameroun was opened for excess water to escape and besides the Benue State capital, it wreaked havoc in its path, stretching from River Benue to River Niger, among others.

Approximately, tens of thousand people have been rendered homeless with properties worth billions of naira and over 2,000 homes lost to the flood reminiscent of the Biblical 40 days and 40 nights flood. The question on everyone’s lips is: When will the waters recede? Will the flooded areas continue to be a tourist attraction and a source of income for the likes of Mai Engine?

A group of stakeholders that met remotely on Friday,...

Researchers and high-level representatives from relevant ministries, departments and...