CDM: How Nigeria can rake in N86b yearly

Financial gains from the worrying climate change phenomenon are increasingly overshadowing the attendant ecological loss, thanks to the Clean Development Mechanism (CDM), which is transforming the environmental gloom into financial boom. 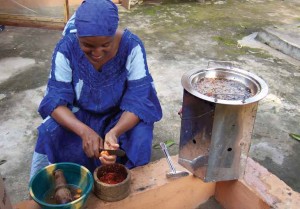 A woman cooking with the Save80 Fuel Efficient Woodstove

Already, Nigeria operates six CDM projects registered by the United Nations Framework Convention on Climate Change (UNFCCC), which is based in Bonn, Germany.

Erstwhile Nigerian DNA to the UNFCCC, Victor Fodeke, who laments that Africa is lagging behind other continents in CDM projects drive, however submits that a recent World Bank study that focused on low-carbon energy study in sub-Saharan identified over 750 CDM project opportunities in Nigeria.

“The report concluded that if all these CDM projects were implemented, slightly over 100 million tonnes of CO2 equivalent (tCO2e) of GHG emission reductions can be generated annually in Nigeria,” says Fodeke.

He adds: “According to  recent study by UNISPACE/G.O.D. Corporation, and which is  in harmony with one World Bank report, considering the prevailing global carbon market price of about $12.5/tCO2e, this can inject over $1.25 billion into the Nigerian economy from the sales of carbon credits (CER units) generated. This will be in addition to investment that will flow into the implementation of clean energy technologies, especially from the cement sector for the underlying CDM projects, which has been estimated to be in the excess of $18 billion.”

According to him, the cement sector is a significant source of GHGs, which he notes makes the sector interesting for CO2 emissions mitigation options.

“As of January 2009, 203 CDM projects were initiated by the cement industry. A total of 52 cement-related CDM projects were registered, 12 were rejected, 121 projects are at the validation stage (of which 13 are located in India, 78 in China and only three in Africa) and 18 projects have been submitted for registration or are being corrected.”

He emphasises that CDM in general and the cement sector can offer attractive opportunities for supporting Nigeria’s development priorities.

His words: “At 20 percent Scenario Deforestation Avoidance, proceeding from the projected 20 percent deforestation rate at $15 per ton of CO2, Nigeria’s carbon credit sequestration capacity through the project’s implementation will generate equivalent of $229,605,000 year, which translates to about N34.44 billion per year.

“AT 50 percent Scenario Deforestation Avoidance, proceeding from the projected 50 percent deforestation rate at $15 per ton of CO2, the nation’s carbon credit sequestration capacity through the project’s implementation will generate equivalent of $574,010,000 per year, which translates to about N86.10 billion every year.

“These funds from CDM can inject real measurable, reportable & verifiable (MRV) dividends into the Transformational Agenda of the current administration and eradicate poverty, hunger and diseases.”

Commenting on the Save-80 Wood Stove, Yahaya Ahmed of the Kaduna-based DARE said: “The project is one of the successful sustainable CDM projects which UNFCCC showcases on its websites. To this effect, we were invited by the UNFCCC and the World Bank Institute to present the project at the International Carbon Expo which took place early June in Cologne, Germany.

“Nigeria, as the host country of the S-80 project, was praised for getting the project as the first of its kind worldwide (in the Categorie of Household Energy using Biomass and the  Methodology AMS II-G) to be registered as a CDM project and the first Biomass Household Energy project to be issued Gold Standard CERs.

“Subsequent to the exhibition in Cologne, we have been invited to present the project again at the conference on ‘Restoring Earth’s Degraded Lands,’ which held recently in Caux, Switzerland, and was jointly organised by the UNCCD (United Nation Convention to Combat Desertification) and the Geneva-based Initiatives of Change (IoC). Executive Director of UNCCD, Luc-Marie Gnacadja, personally commended Nigeria for hosting the Save-80 project.”