May 18, 2017 Comments Off on Bonn talks: Countries make progress on ‘Rulebook’, as reactions trail summit 635 Views

Negotiators at the UN climate change talks in Bonn, Germany have been working through details of the Rulebook, an operational blueprint that will ensure the effective implementation of the Paris Agreement. 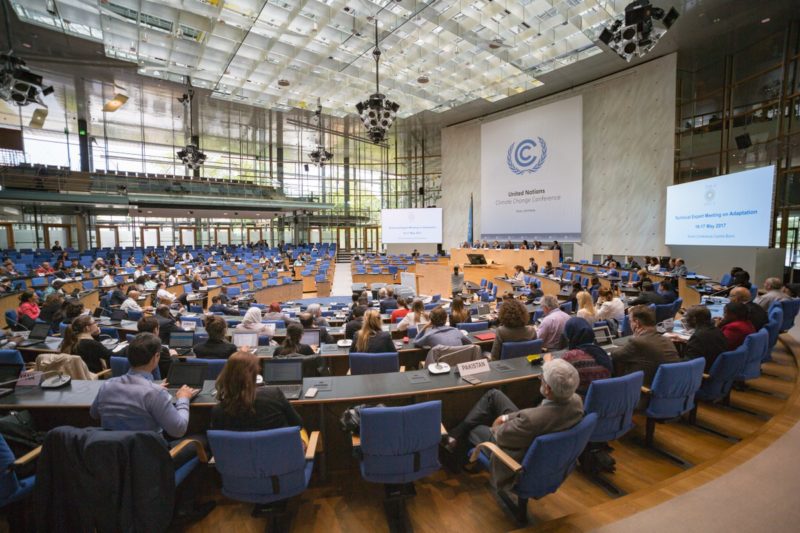 Delegates at a meeting during the Bonn Climate Change Talks

Observers are applauding progress made in Bonn, with negotiators advancing work on the implementation of the Paris Agreement. Indeed, countries reportedly stayed focused on the task at hand: building on the details of the Paris “Rulebook”, for its speedy implementation.

“The most vulnerable countries have reminded us that the goals of the Paris Agreement are non-negotiable. At this juncture, we need an unwavering signal from all countries that climate action will not be relegated to a mere footnote on the global agenda,” says the Climate Action Network, adding:

“There can be no room for confusion or backsliding on the direction and speed of travel that governments promised to embark on in Paris. At the upcoming G7 and the G20 summits, civil society players call for enhanced and sustained political commitment to act on climate change to ensure a successful outcome in COP23, under the Fiji Presidency, and beyond.”

Krishneil Narayan, Coordinator, Pacific Islands Climate Action Network, said: “Pacific islanders are determined to ensure that COP23 builds on the momentum from Paris and delivers the strongest possible outcomes for the vulnerable countries and for communities everywhere.

“The ‘Pacific COP’ will be a COP for the people, not the polluters. Ensuring our survival means implementing actions that achieve the 1.5ºC temperature limit by bringing an end to the fossil fuel era; addressing loss and damage; and fast tracking the flow of climate finance into the Pacific for adaptation. Pacific Islands Climate Action Network (PICAN) welcomes the progress made at the Bonn negotiations session this May.

“Whilst the negotiations moved at a slow pace during this session, we understand that developing the Paris rulebook from scratch is a difficult task for the negotiators. PICAN looks forward to working closely with the COP23 Presidency and the Pacific people to ensure that the Talanoa process – reflecting the true Fijian spirit of dialogue – is inclusive, participatory and transparent and leads to some concrete decisions at COP23.”

Sven Harmeling, Climate Change Advocacy Coordinator, CARE International, said: “Climate change impacts are hitting vulnerable populations all over the world. Almost all countries here in Bonn have made clear: Backtracking from the Paris Agreement is not an option; climate action must be ramped up! The negotiations have made moderate progress, but the spotlight will now be on the most powerful nations. When the leaders of G7 and G20 meet in the coming weeks, the world expects them to protect the climate vulnerable from climate risks and to take actions to cut emissions more quickly.”

Vitu Chinoko, Southern Africa Advocacy and Partnerships Coordinator, CARE International, said: “Southern Africa is still recovering from the worst drought in 35 years, while vulnerable countries, like Mozambique and Madagascar, have been hit by cyclones. It is clear that poor populations, in particular women and girls, are already facing impacts that leave them hungry and stuck in poverty. While countries are implementing actions to adapt to these impacts, the negotiations continue to move at a slow pace, despite a fruitful exchange of ideas. We expect countries to come to COP23 prepared and committed to agree on next steps that promote learning, action, and support.”

Teresa Anderson, climate policy officer for ActionAid International, said: In spite of uncertainty around the US’ commitment to the Paris Agreement, negotiators in Bonn did not get distracted, and instead got on with the job at hand.

“Writing a brand new rulebook post-Paris began with a fair amount of head-scratching. But slowly, slowly, ideas are taking shape. Negotiators have begun to sketch an outline of the rulebook, and when they come back for the next round of negotiations they’ll be ready to do the colouring in.

“It’s clear that developed countries’ reluctance to deliver on their financial goals is infecting a number of different streams of negotiations. In discussions on agriculture and adaptation, for example, vulnerable countries’ efforts to move towards implementation were stalled by developed countries’ apparent allergy to anything that has cost implications.”

Li Shuo, Climate Policy Advisor Greenpeace, said: “Uncertainty over Trump’s decision on the Paris agreement did not deter delegates here in Bonn, but instead galvanised their resolve to move ahead with climate action. In the next days and weeks we expect the shared leadership among responsive countries to grow even stronger. The new coalition of willing that is taking shape should help secure strong outcomes for climate at the G7 and G20 summits.”

Manuel Pulgar-Vidal, leader of WWF’s global Climate & Energy Practice, said: “It was encouraging to see that discussions in Bonn were not around whether or not the Paris Agreement was needed but rather about the details of its implementation. This sends a strong signal that the climate negotiations are not being paralysed by politics. Rather, negotiators engaged in the technical discussions that are required to make substantial progress by COP23 on the rules that will guide the implementation of the agreement.”

Lutz Weischer, Team Leader International Climate Policy, Germanwatch, said: “The delegates in Bonn worked through their tasks diligently and constructively, showing that countries remain committed to the Paris Agreement. When ministers meet in Berlin on Monday and Tuesday for the Petersberg Climate Dialogue, they need to send the same strong signal: The world is committed to making the vision enshrined in the Paris Agreement a reality. This requires a commitment to increase national targets as the first round of the ambition mechanism kicks in in 2018.

“The Petersberg Dialogue is also another opportunity where ministers from the most vulnerable countries will remind the richest countries that it is their particular responsibility to immediately cut emissions and increase support for addressing climate impact in developing countries. We expect Chancellor Merkel to fight for a strong climate outcome both at the G7 summit in Italy next week and the G20 summit in Germany in July. As the work continues towards COP23 in Bonn, it is crucial that civil society is included in the next steps of the process. Excluding our submissions and participation in roundtables is not acceptable.”

Tamar Lawrence-Samuel, Corporate Accountability International, said:
“If this round of negotiations has proved one thing, it’s that governments and civil society organisations are determined to create policy to address the corrosive influence of Big Polluters. Try as they might, the industry and the Global North governments in their pockets will not be successful in suppressing our voices or undermining this movement. Around the globe, people have already made it clear: those driving this crisis have no role in making the rules designed to constrain the source of their profits. Simply put, despite bullying from corporate trade groups and the governments representing the industry’s interests, the progress made at this session ensures that a process is underway to advance a conflict of interest policy in the years to come.”

ALSO READ:  Global warming surges as 2020 voting issue in US

Mohamed Adow, International Climate Lead, Christian Aid, said: “The Bonn session was a technical meeting meant to work out the details of how the Paris Agreement will operate, and we’re pleased that the negotiators, have weathered uncertainty from the US, rolled up their sleeves and got on well with the job at hand. Some feared that the indecision around American involvement would have rattled the negotiators, but on the contrary, they have actually shown their resolve and recommitted to the Paris Agreement.

“The upcoming meetings, especially the G7 and G20, will be important for preparing the ground for the COP23 summit and will heighten the political pressure for major economies, including the US, to stay on course. They will hopefully send a strong signal to the world on their unwavering support to implementing the Paris Agreement.”

Camilla Born, Policy Adviser, E3G, said: “From negotiation rooms in Bonn, to phone calls between Beijing and Paris, one message was clear – the Paris Agreement is irreversible. Regardless of the US’ ambiguous position, negotiators made steady progress piecing together the finer points of the rulebook. Now attention turns to the G7 and G20 as pressure grows in capitals to deliver the goals outlined in the Paris Agreement.”

Jan Kowalzig, Senior Policy Adviser Climate Change, Oxfam, said: “The Paris Agreement is stronger than Donald Trump. Despite his threat to leave the agreement, all other countries have begun crafting the rulebook for the implementation of the landmark climate deal, and will continue to do so at the UN climate summit later this year. World leaders must now use the upcoming G7 and G20 summits to send a strong message to the US president that pulling out of the Paris Agreement will damage the United States, politically, diplomatically and economically.

“Yet there must be no mistake: Current ambition to reduce dangerous greenhouse gas emission remains woefully inadequate. We’re still heading for global warming of 3-4°C with disastrous consequence for millions of people around the world living on the frontlines of climate change as droughts, storms and floods threaten their homes, their harvests and their livelihoods. At the same time, rich countries keep shying away form significantly increasing funds to support poor countries adapting to the worsening impacts.”