November 22, 2017 Comments Off on Battling irregular migration in Nigeria: Pros and cons 1,317 Views

It took about two and a half hours from the heart of Lagos, Ikeja to Seme Border, plying an almost non-motorable and grid-locked road on the so-called ECOWAS high-way; but that is a story for another day. 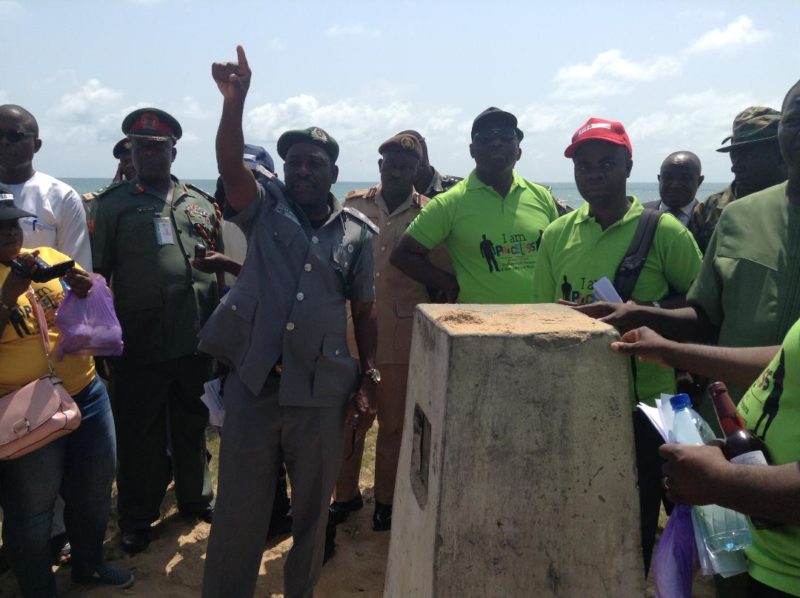 Comptroller Nigeria Customs, Seme Area Command, Abdullahi Mohammed (hand in the air), pointing at the imaginary border line beacon between Nigeria and Benin Republic at Seme as participants look on

The trip in a 30-seater coaster bus was on Day One of the recent United Nations Office on Drugs (UNODC) Sensitisation of Seme Border Communities on Smuggling of Migrants (SOM) in Promoting better management of migration in Nigeria by combating and reducing irregular migration that occurs, inter alia, through Trafficking in Persons (TIP) & Smuggling of Migrants.

The team’s first point of call was to pay advocacy on the Comptroller Seme Command of NIS, Ibrahim Liman. His warm welcome eased off the tension from the tortuous trip and then, the entourage proceeded to sight see the coastal line and border between Nigeria and Benin Republic while they awaited an interface with officers of the security formations at Seme Border.

It was both intriguing and frightening standing at the edge of the Atlantic, staring into the unknown, endless distance of the ocean. The cascading, rolling and roaring waves smacked of beauty and terror. Beauty in the form of nature’s wonder and terror in the form of the oceans ruthless claim of lives usually smuggled to other shores.

The ocean, just like the desert has claimed many Nigerian lives who are unfortunately misinformed and make the perilous journey to Europe in search of greener pastures. Such gave rise to the fight against smuggling of migrants in Nigeria which is championed by the UNODC through EU funding in conjunction with over 100 state and non-state actors.

The project aptly titled: “Promoting Better Management of Migration in Nigeria by Combating and Reducing Irregular Migration” which occurs, inter Alia, through Trafficking in Persons (TIP) and Smuggling of Migrants (SOM) is targeted amongst other things to encourage Nigeria to maximise the potential of migration, considering that the country is opportune to have a vibrant population with 70 percent within the range of 40 years.

As elucidated by UNODC National Project Officer, Sylvester Atere, at all meetings, they desire to see people have informed knowledge to make informed decisions and choices that will deter irregular migration and rather encourage regular migration in the Country.

Accordingly, representatives of all the formations where in unison over the germaneness of fighting against SOM in respect to its ever growing menace. According to them, they have been working together to address the issue in view of the fact that it is all encompassing and constitute security, economic, health and developmental challenges amongst others.

An excursion to a section of the colonial pillar at the imaginary border line between Nigeria and Benin Republic by officers of the formations gave the participants a clearer view of the seemingly fluid flow of traffic from one end to another. However, this flow could very well be misused by some unscrupulous elements to engage in any form of smuggling.

The next point of call to the Oba Akran of Badagry Kingdom, HRM, De Wheno Aholu Menu Toyi 1 in his palace heralded a rich culture of a people within the mix of trans-border activities. The entourage on arrival at the palace encountered a folklore singer with his band, heartily singing praises of the Oba and giving a rendition of the proud history of the Ogu (Egun) people who inhabit Badagry.

The warm reception made colourful by a full palace of high Chiefs and other subjects was made even more worthwhile with the pledge by the Oba to enlighten his people on SOM with the view to stemming its practice.

Day Two of the programme saw the UNODC and NIS team engaging  traditional leaders, religious leaders, transport union members, market men and women, artisans, community leaders, youth groups, business community, agencies and NGOs/CBOs in an interactive session over SOM. A video display of the  ills of SOM was shown to the crowd. At the end of the session, the stakeholders had a better understanding of SOM as enthused by a participant,  John Okun who stated that he is happy with the sensitisation which has informed him more on the dangers of smuggling of migrants adding that it is a useless endeavour that bears no good.

Day Three which was the wrap-up constituted of an interface with officers and men of various Federal Agencies involved in border management at Seme Border, including those from Benin Republic and then, an advocacy visit to Lords New Generation Schools. The target of the officers was apt on the premise of the rationale that they are managers along the border.

In all these sessions, after proper sensitisation on SOM, distribution of the campaign paraphernalia such as T-shirts, Fez cap, pen and flyers, a mock display of handing over red card to SOM was carried out by the crowd.

It is worthy of note that the SOM business is the 3rd most profitable and criminal business around the world and majority of those swallowed up by the desert are Nigerians. To this end, the call for synergy, purpose and union amongst security agencies at border communities is now or never. As earlier stated, the purpose is not to discourage people from traveling but to be be well informed and not do it irregularly. So to say, the security formations at the border need to be at peace with border communities and work closely with the communities, so they can have their ears to the ground and curb the menace of SOM as well avert chaos.

Meanwhile, another statistics by the Ministry of Interior, Italy indicates that, by 2016, irregular migration in Nigeria stood at 36,000 while that of Ghana stands at a distant 5,636. Accordingly, 316 convictions have been recorded by National Agency for the Prohibition of Trafficking in Persons (NAPTIB).

It is hoped that, by the end of this year, when the SOM project by UNODC would come to a close, the rate at which Nigerians engage in irregular migration would have reduced considerably, due to the acquired knowledge  and informed decisions that no nation’s economy is totally exceptional and anyone can actually make it right here in Nigeria, once they are hardworking. Most importantly, seeing the sustainability of this programme will go a long way in ensuring that its ideals do not die off, but are sustained by the government as well as both state and non-state actors or stakeholders as it were.

Airtel Nigeria says it will spend N300 million to support the fight against COVID-19 pandemic, ...