April 1, 2016 Comments Off on Anxiety over impending extreme weather 2,248 Views

Health and environment experts want governments at all levels to allocate more resources to help cushion the effect of extreme weather condition in the country predicted by the Nigerian Meteorological Agency (NIMET). 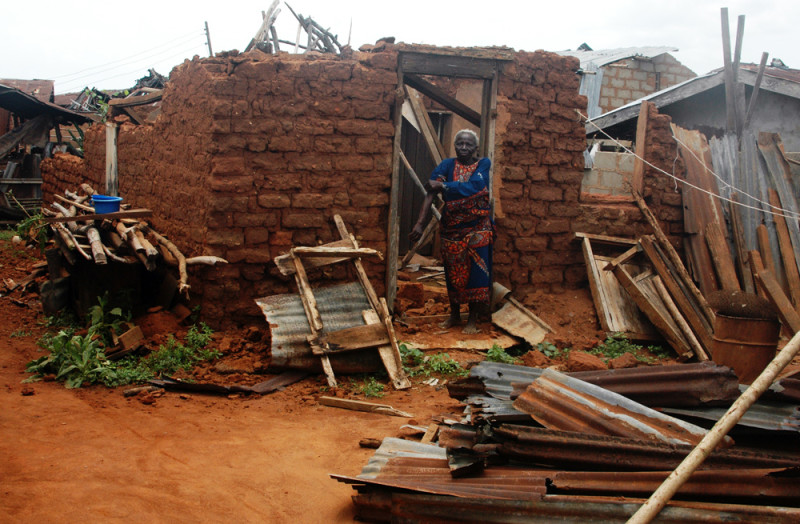 Extreme weather: Windstorm destroys a home in a Lagos neighbourhood

NIMET had recently in its annual rainfall prediction told Nigerians to get ready for more hot days, warm nights and heat waves this year.

The experts believe that the hot weather is likely to accelerate devastating health challenges in different parts of the country, and could only be managed if proper planning is on ground.

According to Dr Tunde Segun, a public health practitioner, if the hot weather comes as predicted, there would be an acceleration of heat relates diseases including meningitis, with children and pregnant women among those that will be mostly affected.

“Exposure to extreme heat can cause illness and even death for some people,” he disclosed.

While urging the authorities to get ready to manage disease epidemic, Dr Segun advised Nigerians to ensure proper ventilation of their homes, among other measures, in order to cope with the situation.

“We need to keep our body temperature in the range of 35.5 to 37.5°C as this protects our vital organs and allows the body to function normally. Adaptive behaviour, such as staying under the shade, indoors in air-conditioned places and using fans to circulate the air, would be helpful,” he added.

To environmentalists, the prediction of more hot days, warm nights and heat waves has only confirmed the widely held impression that climate change is real, adding that inhabitants of Mother Earth are in “serious trouble” if urgent steps are not taken to address the impending disaster.

The prediction by NIMET is noteworthy, what with the global average air temperature hitting one degree hotter than it was at the start of the 20th Century.

Nigeria is particularly said to be among the most vulnerable countries to the effects of climate variation, as the nation experiences issues such as desertification in the North, flooding and coastal erosion in the South, gully erosion in the South East, as well as loss of biodiversity and intense heat.

Environmentalists say the launching of an aggressive tree planting initiative and preservation of existing forest reserves remains the most sustainable ways of controlling extreme weather conditions, including the hot weather that was predicted by NIMET, as the trees absorb the excess carbon that constitute high percent of greenhouse gasses that cause warming.

Reacting, the Director-General, Chartered Institute of Environmental & Public Health Management of Nigeria, said that all hands must be on deck to take care of the environment, otherwise the human race faces the threat of being eliminated from the face of the Earth.

His words: “Man is now an endangered species and, in some 50 years’ time, environmental scientists have warned that if we do not do something now, tomorrow will be too late.

“The world is changing gradually. If you look at the Antarctica, in those days it used to be very cold and the ice would spread. But these days global warming has caused the ice to melt, thus inducing sea level rise and flooding.

“Greenhouse gases from faulty cars, refrigerators, air conditioners and others have destroyed the ozone layer. The sun is now able to penetrate the earth and in the process living things are dying, deserts are increasing. The tidal waves of the ocean are becoming more ferocious”.

He noted that climate change would worsen diseases such as malaria and cholera, and that the onus lies on the government to plan ahead to avert it.

“It is an incontestable fact that the whole world is facing a barrage of environmental challenges, more than ever before. These challenges range from pollution, waste management, erosion, deforestation, desertification and, most importantly, climate change. According to a report by the Unites Nations Children Fund (UNICEF), climate change could worsen existing inequalities among the 2.3 billion children across the world. Consequently, more children would be exposed to malaria, cholera and other variety of heat related illnesses.”

An environmentalist, Professor Oladipo Olukayode, who noted that the kind of hot weather predicted by NIMET usually causes meningitis and other heat-related diseases in Northern Nigeria, maintained that the weather across the country remains normal, unless the hotness continued till next month.

“Normally, after the hammatan the months of March and April are usually very hot. That is the major cause of meningitis in the Northern part of the country. But if it exceeds March and April, then we are in trouble,” said Prof Oladipo.

NIMET had advised the country to adopt adaptation strategies and engage in climate resilient practices to cope with the unsavoury developments associated with extreme weather.