December 18, 2015 Comments Off on When Amina Mohammed visited impacted sites in Lagos 1,973 Views

Federal Minister of Environment, Mrs. Amina Mohammed, apparently making good her commitment to do more in implementing the recently decided Paris Agreement on Climate Change, has embarked on the inspection of some climate impacted sites and areas of environmental concern across the country.

Environment Minister, Amina Mohammed, beside the remains of a structure destroyed by coastal erosion at Alpha Beach, Lagos

Her first port of call was Lagos where, on Tuesday (December 15, 2015), she led a team of officers of the Ministry of Environment and National Environmental Standards and Regulations Enforcement Agency (NESREA) and representative of the civil society in the state to inspect three sites in the former federal capital city. The impacted sites include: Alpha Beach in Lekki, Kuramo Beach on Victoria Island and Makoko Community at Yaba.

According to an engineer from the Ministry of Environment who conducted the minister and her team round the beach, Alpha Beach used to be one of the top beaches in Lagos State before coastal erosion, as a result of sea level rise, started to cause massive destruction on properties around the shoreline and the close by Okun Alpha community. The beach shoreline used to be about 150 meters away from the houses that are facing the shoreline but the ocean has swallowed the 150 meters’ setback in the last couple of years, destroying all the houses along the shoreline including the community health centre, business outlets and dwelling units, said the engineer.

The ruins of the properties and the losses and damages as a result of the sea level rise are conspicuously visible around the shoreline. Some of the residents of the community have been forced to relocate further inland while several others have resorted to squatting on available vacant land around the beach due to inability to afford the rents to secure alternative accommodation.

A resident of the community said: “Every year, the water keeps coming at us, and the devastation has been unprecedented in recent years. About two weeks ago, the community was flooded including the Baale’s (Community Chief’s) house which was about two streets away from the shoreline.”

Some members of the community believe that the flooding was caused by the dredging of the bar beach and the sand filling (land reclamation) of some parts of the ocean to create the Eko Atlantic City, a mixed-use real estate development project that has been dogged by controversy.

But the engineer could not ascertain whether the incessant sea level rise in recent years at the beach was caused by the dredging of the Bar beach and the Eko Atlantic City project. According to him, the dredging of the Bar Beach began in 1990 which predates the unprecedented sea level rise and the resultant flooding. He was, however, of the opinion that the ocean rise is caused by the effects of abandoned shipwrecks within the stretch of the Lagos coastline which, according to him, was acting as a groin to disturb the free flow of the water and the creation of the east and west moles.

The government recently constructed two groins on the water to protect the shoreline from erosion. The groins were constructed with hard rocks and sand and are designed to trap sand from the waters. The minister and her team walked on the groins to see the effect of the flow of waters around the groins before inspecting the damaged properties along the shoreline. The engineer underlined the need to construct more groins but the challenge, he added, is that the cost of constructing more groins could be very high.

The minister spoke with the members of the community who lamented the neglect of government despite their plight. They however requested the minister to visit the community again so that she can be given detailed account of the impacts of the sea level rise. 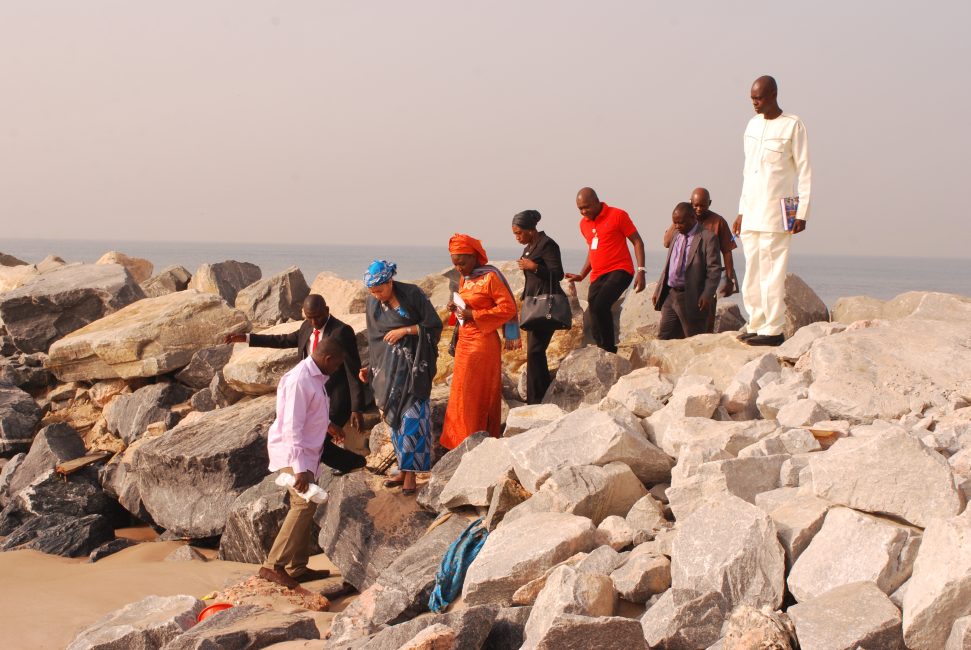 According to the engineer, the wall is five meters high because the highest wave that has ever been recorded on the beach is about five metres. He disclosed that there is a plan to add additional three metres to the wall as a safeguard. The Eko Atlantic City is expected to stretch up to Goshen Beach Estate in Lekki, another shoreline development being threatened by sea level rise and coastal erosion. The rate of erosion along the Kuramo Beach cannot be measured yet but the Eko Atlantic City project is expected to reduce erosion around the beach, stated the engineer, adding that the sand being used for reclamation is pumped from the ocean at three separate sites which is about 20 nautical miles into the ocean.

“The walls were built with rock groins which is expected to last for about 50 years. The Eko Atlantic City project has a two-year delivery plan,” he said.

The minister and her entourage was led by Abel Enikanologbon, the former secretary for Women Affairs at Yaba Local Council Development Area (LCDA) into the Makoko-on-water Community through a wooden boat paddled by local boat men in the community. 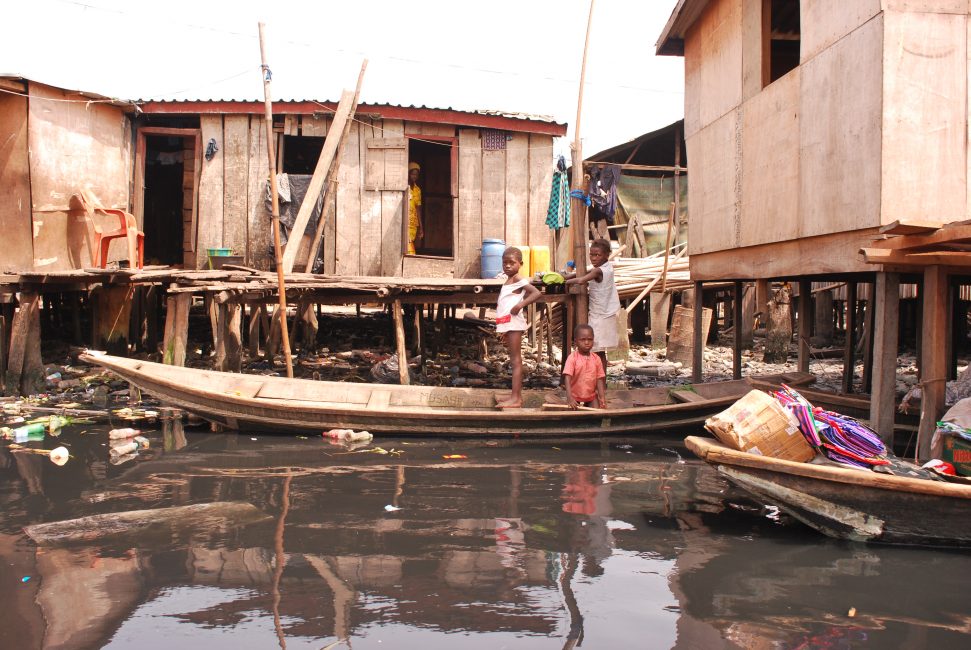 The surroundings of the community appeared unkempt, the water looked dirty and many of the houses were built on stilts with solid waste being the foundation of the houses. The community displayed shabby looking schools, and a hotel where women of easy virtue hibernate. Most social and commercial activities take place on water as women, children and men were seen parading their wares on the boat. Boys and girls who seem less than five years old were seen paddling boats by themselves on the water and going about their different chores.

The minister was at the floating school but she was not allowed to go inside the school by some community touts who felt she ought to have informed them before coming. The minister observed different logging activities around, and fumes from the nearby Oko-Baba Sawmill and saw dust were very visible from the boat.

A representative of the community explained that the Lagos Waste Management Agency (LAWMA) has three offices in the community and they come to collect refuse from the community on a weekly basis. He added that this is not enough as the community generates a considerable amount of waste and even some of the wastes are dumped into the water. This explains why the water channel is full of dirt and partially blocked, he added.

The population of Makoko community living on water is more than those on the land. The community comprises Egun, Ijaws and Ilaje people. The overall community leader of Makoko is Raymond Olaiya Akinsemoyin, a lawyer. The community lacks portable water, sanitation services and toilets.

It was obvious that the Makoko community needs a thorough clean up and behavioral change to sustain the clean up. Waste-to-wealth initiatives and introduction of clean cooking solution through the use of brickets could be introduced into the community. These projects will need to be more focused and mobilise the inclusive participation of the community to foster a supportive environment for the initiatives to succeed.

Some of the important recommendations coming from the inspection include:

The inspection was obviously an eye opener. It gave the minister the opportunity to see firsthand the impacts of climate change and the loss and damages arising therefrom. She was able to understand some of the underlining issues behind some environmental challenges in Lagos State and how to set priorities to address them.