In the first of its decarbonisation series, the Climate Action Tracker (CAT) analysis looks at transport, a sector that is key to achieving the deep cuts in emissions required by the Paris Agreement. 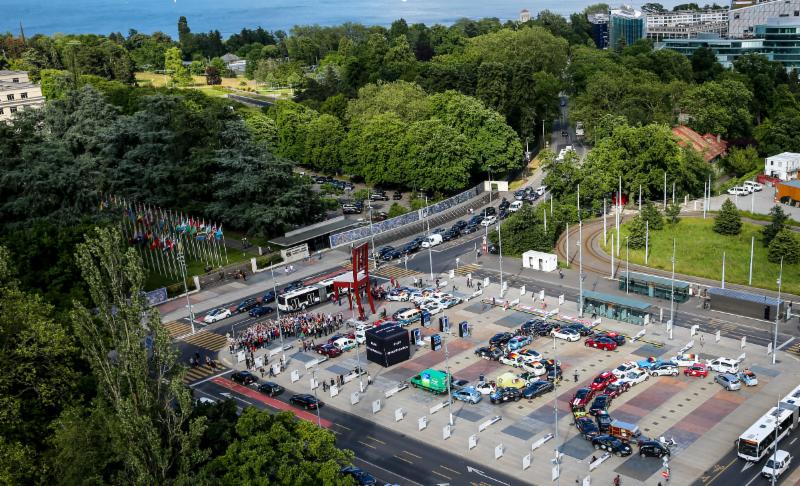 The World Advanced Vehicle Expedition (WAVE), world’s largest electric vehicle rally, in respect of which the 2016 held on the Place des Nations in front of the UN European headquarters in Geneva, aims at promoting zero-emission vehicles, considered crucial to limiting warming to 1.5°C

In this series the CAT examines specific energy-intensive sectors, and how emissions can be reduced to be in line with the Paris Agreement’s long term warming limits, namely, to keep global temperature rise “well below” 2°C, and to “pursue efforts” to limit warming to 1.5°C.

The CAT’s latest analysis shows that if governments were to double fuel economy standards in new passenger cars by 2030, and achieve a 50% EV uptake by 2050, then most get close to – or even reach – a 2°C warming pathway. But a 1.5°C pathway requires more action.

“Emissions standards only get the transport fleet to a certain point – it is clear that in order to get to the Paris Agreement’s lower temperature goal of 1.5°C, the world needs to make a paradigm shift to zero emissions vehicles,” said Markus Hagemann of NewClimate Institute.

“Attention must also be paid to the recent discovery that some car manufacturers have been deliberately manipulating emissions tests,” he noted.

Perhaps a positive outcome of this scandal is that it has brought to light major shortcomings in the emissions tests themselves, sparking a move towards more realistic tests, hopefully leading to smaller discrepancies between laboratory and road emissions intensities.”

“Aside from much-needed shifts in transport behaviour, for the transport sector to decarbonise there is no choice but to adopt zero-emission vehicles. For electric vehicles this would mean that they also need to be powered by renewable electricity,” said Yvonne Deng of Ecofys.

To avoid exceeding a 1.5°C warming trajectory, zero global aggregate emissions would need to be reached around the middle of the century, implying that the last fossil gasoline or diesel-powered passenger vehicle would have to be sold around 2035 (assuming a new car would be on the road for an average of 15 years).

“Even a date of 2035 or so for the last new fossil-fuel powered passenger car could be late: the earlier we decarbonise the transport system, the less we will need to rely on negative emissions that largely require technologies still awaiting large-scale deployment,” said Michiel Schaeffer of Climate Analytics.

In the EU and the USA, the increased deployment of EVs would keep overall emissions on a downward trend in line with a 2°C pathway.

In India, the projected rise in vehicle numbers (activity) is so high that absolute emissions from passenger cars would keep rising even under Scenario 2. However, this would still be in line with the IEA’s 2°C pathway for India, which foresees a similar rise in emissions, reflecting this strong expected growth.

The situation in China, Brazil and Mexico lies between these two cases, with emissions under Scenario 2 stabilising as the effects of increased activity and reduced intensity approximately balance out. The resulting decreasing emissions trend is just enough to comply with a 2°C pathway.

Overall emissions are expected to decrease most strongly in Japan (in both scenarios), partly due to declining activity levels.