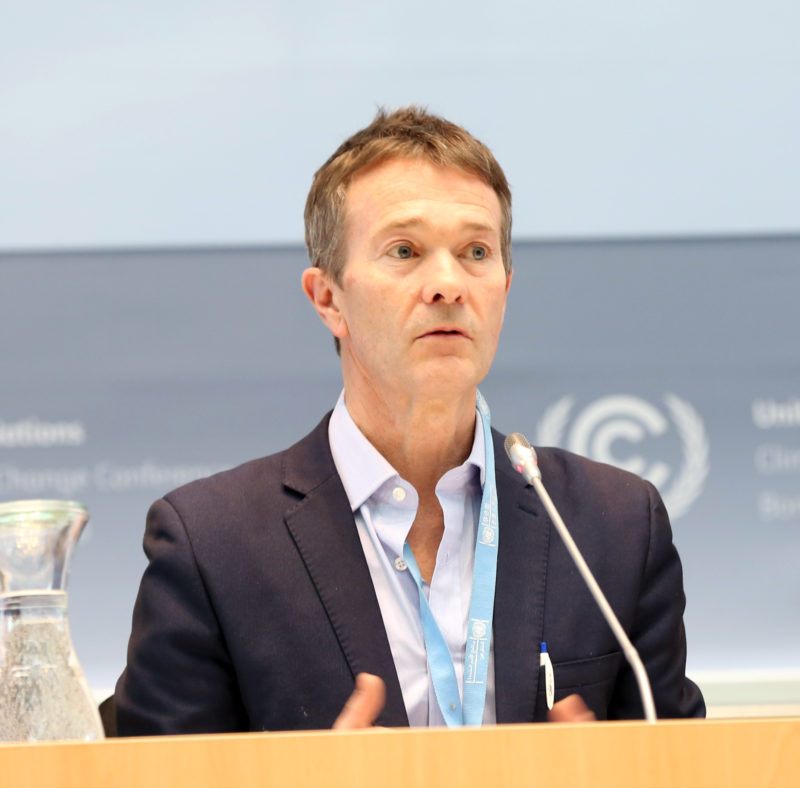 Two winners will get a trip to the UN Climate Change Conference in Bonn in November (COP23), where they will join the UNFCCC communications team as videographers and reporters. According to the UNFCCC, the competition is open to young people between the ages of 18 and 30 and videos must be submitted by 18 August 2017.

Nick Nuttall, Spokesperson and Director of Communications at the UNFCCC, said: “We are absolutely delighted to be launching the Global Youth Video Competition for the third year running.

“I am even more excited about viewing the video shorts that young people from across the globe will be making and sending in, in order to win a place at the UN climate conference in Bonn in November.”

“With the Pacific island of Fiji presiding over COP23, I would like this year to especially urge young, creative people from small islands and vulnerable coastlines to get out their cameras and their smart-phones and submit cool, amazing and inspirational videos about how they and their communities are taking climate action,” added Mr. Nuttall.

“We are seeking to inspire collaboration and learning sharing stories presented by young people that could be of interest for their peers around the world,” said Angelica Shamerina, Programme Advisor with the UNDP-GEF Small Grants Programme, which is supporting the competition.

“For our programme, support of the young generation is a priority, especially on the issue of climate change given that the young people will face the most severe climate impacts and are the future leaders of efforts curb greenhouse emissions and build resilience,” she added.

The two categories for this year are: Climate friendly and resilient cities; and Oceans and climate change.

Also on Wedenesday, the UNFCCC launched a journalism competition that will ensure that 10 journalists from the Pacific island region get the unique chance to travel to and report from COP23, which holds in Bonn, Germany on November 6 to 17, 2017.

The competition will award journalists from print, on-line and radio/TV with the prize of sponsored participation in the conference, media training at the prestigious DW Akademie and access to UN and other experts.

The UN body says the decision to launch a Pacific island journalism competition reflects the important role the small island developing State of Fiji will be playing at the 23rd Session of the Conference of the Parties to the UN Framework Convention on Climate Change – the official title of the conference.

ALSO READ:  Making Nigeria climate resilient (5): How vulnerable is she?

Fiji will be presiding over COP23 and the Fijian Prime Minister, Frank Bainimarama, will undertake the key role of COP President on behalf of all countries attending.

The competition has been generously funded by the German Government’s Ministry of Foreign Affairs. Thomas Meister, Head of the Ministry’s Division for International Climate and Environmental Policy said: “The media play a central role as navigators and mediators between the international climate talks, the science community and civil society. The German Foreign Office is thus happy to support a media training centered around COP23 for 10 journalists from the Pacific region, a region that is among those worst affected by climate change.”

Nuttall, who is also Spokesperson for COP23, said: “We are thrilled that Germany’s Ministry of Foreign Affairs agreed to support this competition. Both the government and the UNFCCC were concerned that the costs of getting to and from Bonn would have been prohibitive for many journalists from that region.”

“Yet we both acknowledged that it was vital to have media from that location here to report to their publics and witness the negotiations, the rich array of Global Climate Action events taking place and the cultural activities that surround such conferences,” he added.

John Connor, the Executive Director of the Fijian COP23 Presidency Secretariat, encouraged all Pacific journalists with an interest in climate change to take part in the competition.

“Thanks to the generous support of the German Government, this is a wonderful opportunity for ten journalists to attend the foremost international conference on climate change, an issue of absolute priority in the region. Joining the world’s media in Bonn, they will be able to tell the story of how the world is responding to this escalating crisis from the Pacific perspective – ensuring that Pacific voices are heard. They will also bring the experience and training they gain home with them, boosting the standard of climate reporting across the region,” he said.

DW Akademie Director Christian Gramsch said: “As DW Akademie, we are pleased to offer media training for journalists from the Pacific Islands during COP23, contributing to independent quality journalism in the field of climate change. The selected journalists will report first hand on climate topics that are crucial to their audiences. It is a pleasure to work so closely with UNFCCC on this innovative project.”