Several weeks ago, the National Oceanic and Atmospheric Administration (NOAA) in the US reported that atmospheric concentrations of carbon dioxide (CO2) surpassed a notable milestone. Indeed, they reached a daily average above 400 parts per million (ppm), albeit for the first time in human history. 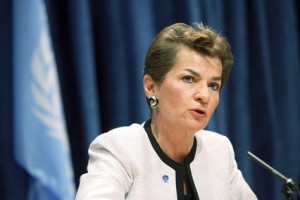 Observers say the milestone, hit on May 9, may be symbolic, but that manmade CO2 emissions from the burning of fossil fuels continue to rise, bringing greater atmospheric warming and exacerbating the effects of climate change.

Research also shows that continued emissions of long-lived greenhouse gases like carbon dioxide will mean “largely irreversible” climate change for 1,000 years even after such emissions have been curtailed.

“The last time we’re confident that CO2 was sustained at these levels is more than 10 million years ago, during the middle of the Miocene period,” says climate scientist Michael Mann. “This was a time when global temperatures were substantially warmer than today, and there was very little ice around anywhere on the planet.”

Readings are taken at the NOAA-operated Mauna Loa Observatory in Hawaii and form part of the Keeling Curve — a continuous record of CO2 measurements dating back to 1958. Bubbles found inside Antarctic ice core samples provide a longer record of CO2 in the air for the past 800,000 years.

CO2 measurements surpassed 400 ppm in the Arctic last summer, but the readings from Hawaii mark the first time prolonged levels above 400 ppm have been observed at more moderate latitudes.

Executive Secretary of the United Nations Framework Convention on Climate Change (UNFCCC), Christiana Figueres, has called for a greatly stepped-up response to climate change by all parts of society.

“With 400 ppm CO2 in the atmosphere, we have crossed an historic threshold and entered a new danger zone. The world must wake up and take note of what this means for human security, human welfare and economic development. In the face of clear and present danger, we need a policy response which truly rises to the challenge. We still have a chance to stave off the worst effects of climate change, but this will require a greatly stepped-up response across all three central pillars of action: action by the international community, by government at all levels, and by business and finance.”

Governments will be meeting in June in Bonn, Germany, for the next round of climate change talks under the umbrella of the UNFCCC. A central focus of the talks will be negotiations to build a new global climate agreement and to drive greater immediate climate action.

ALSO READ:  Who is responsible for climate financing in Nigeria?

Former US Vice-President, Al Gore, remarks: “Take this day and the milestone it represents to reflect on the fragility of our civilisation and the planetary ecosystem on which it depends We must take immediate action to solve this crisis. Not tomorrow, not next week, not next year. Now.”

Nigerian climatologist, Prof. Olukayode Oladipo, stresses: “This points to the fact that global efforts to reduce CO2 emissions are not working and there is need to have higher emission reduction commitments from the main pollutants – America, Russia, China and India.”

CEO of Ecometrica, Richard Tipper, underlines the need to maintain natural carbon sinks, saying: “One thing seems clear. Despite the annual round of climate negotiations the rate of carbon accumulation in the atmosphere is increasing, and seem likely to continue to increase at a rate beyond many of the scenarios envisaged back in 1995.

“Forests remain an important sink of CO2, taking up around one quarter of what is emitted by our use of fossil fuels each year (now up to 31 billion tonnes per year) – much like a benevolent uncle paying part of one’s debts. But despite progress in some countries on tackling deforestation, there are warning signs that forest health is declining. The benevolent uncle may be unable to help much longer and some forests could tip from becoming sinks to sources.”

ALSO READ:  Why gender should be mainstreamed in disaster management, by NEMA

Since the Industrial Revolution began around 1750, human activities have contributed substantially to climate change by adding CO2 and other heat-trapping gases to the atmosphere.

Previous: Video: Cremation in Africa
Next: Osuntogun at 70: How I emerged, fairing as an environmentalist