December 4, 2017 Comments Off on World converges on Nairobi to tackle pollution menace 443 Views

Over 4,000 heads of state, ministers, business leaders, UN officials and civil society representatives gathered on Monday, December 4, 2017 at the third UN Environment Assembly in Nairobi to tackle the global menace of pollution. 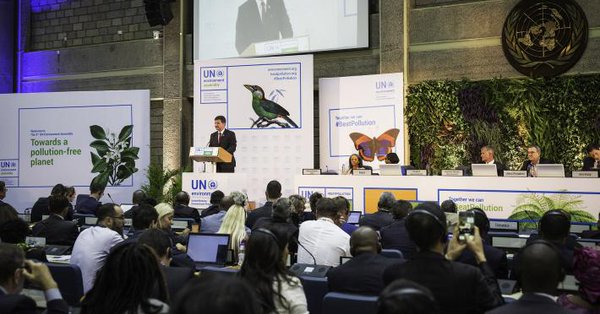 Opening session of the the third UN Environment Assembly in Nairobi

The assembly runs for three days from Monday at UN Environment headquarters in Kenyan capital city. As the world’s highest-level decision-making body on the environment, it brings together governments, entrepreneurs, activists and others to share ideas and commit to action.

“Our collective goal must be to embrace ways to reduce pollution drastically,” said Dr. Edgar Gutiérrez, Minister of Environment and Energy of Costa Rica and the President of the 2017 assembly. “Only through stronger collective action, beginning in Nairobi this week, can we start cleaning up the planet globally and save countless lives.”

Everyone on earth is affected by pollution, according to a new UN Environment report, “The Executive Director’s Report: Towards a Pollution-Free Planet”, which the meeting is using as the basis for defining the problems and laying out new action areas.

The report’s recommendations – political leadership and partnerships at all levels, action on the worst pollutions, lifestyle changes, low-carbon tech investments, and advocacy – are based on analysis of pollution in all its forms, including air, land, freshwater, marine, chemical and waste pollution.

Overall, environmental degradation causes nearly one in four of all deaths worldwide, or 12.6 million people a year, and the widespread destruction of key ecosystems.

Over a dozen resolutions are on the table at the assembly, including new approaches to tackle air pollution, which is the single biggest environmental killer, claiming 6.5 million lives each year. Over 80% of cities don’t meet UN health standards on air quality.

Exposure to lead in paint, which causes brain damage to 600,000 children annually, and water and soil pollution are also key focus areas. Our seas already contain 500 “dead zones” with too little oxygen to support marine life. Over 80 percent of the world’s wastewater is released into the environment without treatment, poisoning the fields where we grow our food and the lakes and rivers that provide drinking water to 300 million people.

There is also a huge economic cost. A just-published report by the Lancet Commission on Pollution and Health says that welfare losses due to pollution are estimated at over US$4.6 trillion each year, equivalent to 6.2 per cent of global economic output.

“Given the grim statistics on how we are poisoning ourselves and our planet, bold decisions from the UN Environment Assembly are critical,” said head of UN Environment, Erik Solheim. “That is as true for threats like pollution as it is for climate change and the many other environmental threats we face.”

A broader UN Environment policy statement, released ahead of the meeting, highlights the links between events over the last 12 months – hurricanes in the Caribbean and United States, droughts in the Horn of Africa and Yemen, flooding in Bangladesh, India and Europe – and the decisions we take about our ecosystems, energy, natural resources, urban expansion, infrastructure, production, consumption and waste management.

Mr. Solheim makes it clear that all of the complex global processes linked to the environment, such as the 2030 Agenda for Sustainable Development and the Paris Agreement, boil down to one simple message: we must take care of people and planet.

Mr. Solheim also points to many solutions to the problem of pollution and other environmental concerns, such as decoupling economic growth from natural resource use.

For example, the policy statement says that technically and commercially viable solutions can improve water and energy efficiency by 60-80% in construction, agriculture, transport and other key sectors, while saving $2.9 – $3.7 trillion a year by 2030. With over 60% of the urban infrastructure anticipated in the coming decades to be built, the opportunities to shape a better future “are simply staggering”.

“Focussing on the quality of growth is key for improvements in quality of life,” said Ligia Noronha, Director of UN Environment’s Economy Division. “That requires a culture that supports responsible production and does not hold up unrestrained consumption as an aspirational way of life. We need to invest differently to transform our economies, also bringing in the private sector to back clean growth.”

The assembly will also see the participation of celebrity activists, such as UN Environment’s new Goodwill Ambassador Ellie Goulding, announcements relating to the #BreatheLife and #CleanSeas campaigns, on air and marine pollution respectively, and the release of new research – from reports on environmental sources of antimicrobial resistance to the state of South Sudan’s environment.