What I aim to accomplish at UNFCCC, by Espinosa

UN Secretary-General Ban Ki-moon appointed Patricia Espinosa as the new Executive Secretary of the United Nations Framework Convention on Climate Change (UNFCCC) in May this year.

The Mexican national comes to the job with more than 30 years of experience in international relations. This includes serving as Minister of Foreign Affairs of Mexico from 2006 to 2012 and serving as her country’s representative to Austria, Slovakia, Slovenia and Germany, as well as to multilateral bodies and international organisations in Vienna, Geneva and New York. Her areas of specialty include global governance, sustainable development, gender equality, the protection of human rights and climate change. In relation to the last area, she was the Chair of the 16th Conference of the Parties to the UNFCCC leading to the adoption in 2010 of the Cancun Agreements – a set of key steps forward in global plans to reduce greenhouse gas emissions and to help developing nations protect themselves from climate impacts.

She was also in the French capital of Paris last year for the 21st session of the Conference of the Parties (COP21) to the UNFCCC, at which the Paris Climate Change Agreement was adopted. The historic pact to combat climate change and to intensify the actions and investments needed for a sustainable, low-carbon future builds upon the UNFCCC and – for the first time – brings all nations into a common cause to undertake ambitious efforts to combat climate change and adapt to its effects, with enhanced support to assist developing countries to do so.

The Agreement’s central aim is to strengthen the global response to the threat of climate change by keeping a global temperature rise this century well below two degrees Celsius above pre-industrial levels and to pursue efforts to limit temperature increase even further to 1.5 degrees Celsius.

As of 3 August 2016, the Paris Agreement has 180 signatories. Of the 180 signatories, 22 have deposited their instruments of ratification, acceptance or approval. The agreement will enter into force 30 days after at least 55 countries, accounting for 55 per cent of global greenhouse gas emissions, deposit their instruments of ratification or acceptance with the Secretary-General.

Ms. Espinosa recently spoke with the UN News Centre about her work and the challenges ahead. 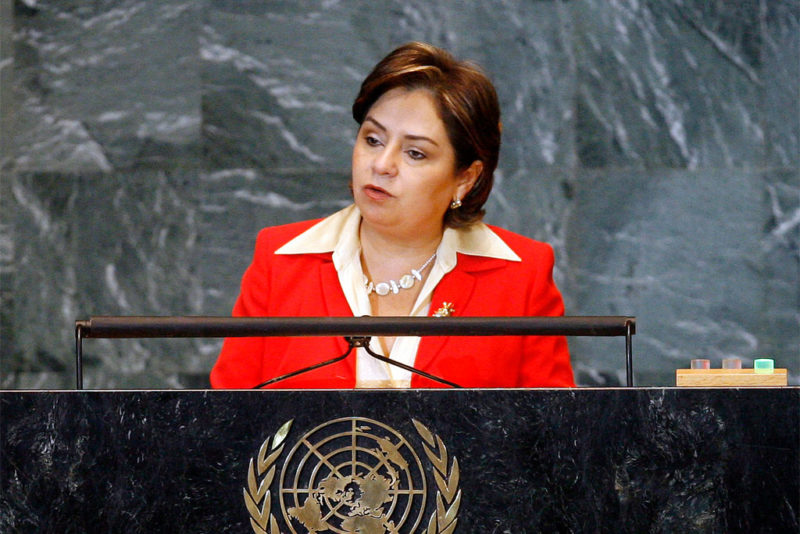 What do you hope to accomplish as Executive Secretary of the UNFCCC?

I am coming to the head of UNFCCC at a very exciting time. We have the approval of the Paris Agreement, whichwas an historic agreement, after many, many years of negotiations. Now we have on board a huge amount of political will of governments but also the willingness from private sector, from civil society, from individuals everywhere in the world, to work towards a low-carbon economy, a low-carbon global society. So I wish to make a contribution in that respect. I wish to support all those actors, governments, private sectors, and civil societies – everybody who is willing to participate in this big challenge that has to do with the future of our planet.

Do you think the Paris Agreement is strong enough to get the world to limit climate change to well under two degrees celcius to 1.5 degrees?

What will be the main driver to ramp up ambitions of countries to do more to reduce emissions and build resilience?

Actually, climate change is really about the wellbeing of people. It is not a very vague concept or a vague problem that is out of our everyday lives. It is actually affecting our everyday lives and this is the fundamental fact that everybody should keep in mind while working toward a low-carbon society. If we think about the people that are affected in their health by the effects of climate change – for instance, the quality of air that we are breathing and how much children and older people are suffering from that; if we look at people who are living in poverty, who are suddenly victims to flooding and they lose not only the little property that they have but they also lose members of their families; if we look at disasters that are destroying infrastructure, leaving completely isolated communities in different parts of the world – we are talking about the lives of people. So having that consideration in mind, it’s a big driver towards more ambitious and urgent action by everybody.

Do think it possible that we will see the Paris Agreement enter into force this year?

We have, as of today, 22 ratifications. That is, in my opinion, very good news and very encouraging. And we have also the invitation to the Secretary General’s special event on 21 September in order to promote early ratification. So I’m very hopeful. I think it would send a very strong message about the willingness to comply with the commitment each country assumed in Paris.

And now that an agreement has been reached, what will be the focus of UNFCCC?

Of course we need to work on different areas. First of all, we need to continue to supporting the governments in their intergovernmental process, in their negotiations because the Paris Agreements provides this very comprehensive framework and it requires a lot of tools that need to be developed still.

For instance, in terms of rules for transparency, rules for measurement – these are issues that are not easy to solve and easy to really to get everyone’s minds together. So that will be one part, an important part, of our work. Of course, the Convention is mandating us to support the conference of the parties that takes place every year, but besides that, because what we really need is to have full compliance with the Convention, we would need to focus a lot on implementation of the Paris Agreement and which translates to the national programmes on climate change for each and every country. We will need to reach out to all those actors – to governments, to civil societies, to businesses – and help in mobilising them to help in this fight against climate change.

Many action areas that are essential for addressing climate change also happen to be a part of the Sustainable Development Goals. How will the two tracks be integrated?

This is a very important area of work for the future, not only work for the UNFCCC but for the whole United Nations system. I would actually say for all of our societies in general too, because of what I was mentioning earlier – the fact that climate change has to do with development. There is only one development process in each country. We need to generate the frameworks, the legal frameworks, the institutional frameworks, the policies that are required in order to allow for countries to have those types of structural transformation processes that are required. So in that sense, this is an area of work that will take a lot of the resources of the UNFCCC and one on which I will be also dedicating myself too.

You mentioned the annual Conference of Parties, the COP, and you were the Chair of COP 16 in Cancun, Mexico, which turned around fortunes of the UNFCCC process. Do you see you a change in the way countries are approaching climate change since that meeting in Cancun?

Absolutely. We are in a completely different environment. When we had the conference in Cancun it followed the conference in Copenhagen where, unfortunately, we were not able to achieve a consensus document and that situation, of course, discouraged many of the participants in the process of negotiations. So it was a very critical moment then we needed to restore trust in the Parties and we needed to restore trust in the process and we managed to do it. Today, there is not only trust – there is an enormous enthusiasm about participating in this agenda and about being apart about this transformation process. So I am very happy to be heading the UNFCCC right now at this very fortunate juncture.

The Paris Agreement has now been signed by 175 countries, which is a great achievement, what needs to happen next and what is the main goal of the September Conference?

Finally, on a more personal note: what made you accept this job?

I could see as a civil servant, particularly in my role as foreign minister of my country, that I had the opportunity to travel a lot and to be close to the reality and to the challenges that many countries are facing, especially, in this case, the region of Latin America and the Caribbean. I was responsible, for instance, for coordinating the help that we offered to countries in the region when there was flooding, when there was drought and people were starving. So I could see very clearly how much suffering this causes, really, a lot of suffering that should not happen. And, of course, I have been working all my life, more than 35 years, as a civil servant and trying to make a contribution to better conditions of living for our people in Mexico but not only for the people of Mexico, as part of my career has been in multilateral affairs. So in many senses the responsibility, the possibility of becoming the UNFCCC Executive Secretary brings together a lot of these issues for which I’ve worked for all my life.