Civil society, community/faith-based groups, and labour activists numbering over 300 on Wednesday marched on the Lagos State House of Assembly, Secretariat to deliver a petition titled “Privatisation is not solution to Lagos water problem” to the Speaker of the House, Obasa Mudashiru. 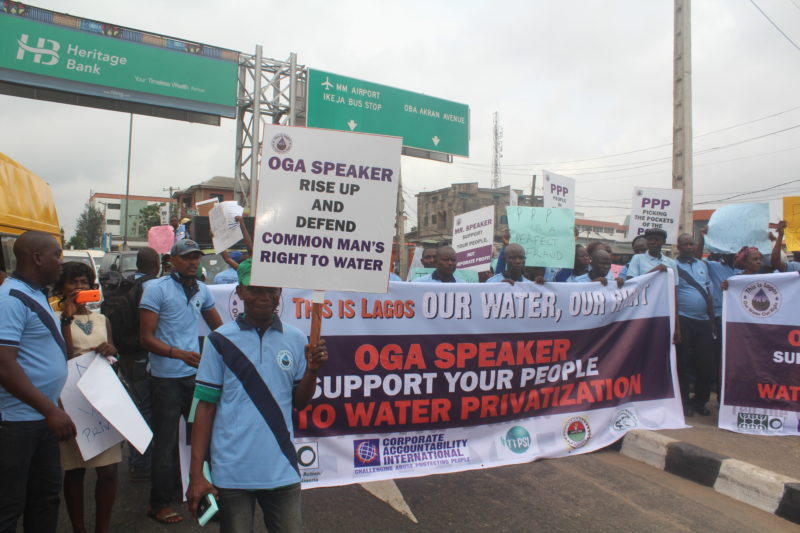 The protest march saw activists march through the streets, handing out leaflets and singing solidarity songs

The protest march, which kicked off at the populated Ikeja Under Bridge, saw activists march through the streets, handing out leaflets and singing solidarity songs as they urged Lagos residents to support the campaign to reject plans by the Lagos State Government to press on with a planned water privatisation.

Participating groups urged the Speaker to join them in affirming the fundamental right to clean water and independent self-governance which Lagos citizens deserve, frowning at decades of the World Bank and the private water industry pushing for the PPP model of water privatisation in Lagos and throughout countries of the Global South.

In the petition, they frowned at the decision of the Speaker to back the PPP plans of the Lagos State Government even after the World Bank pulled back from the plan in December 2015.

Akinbode Oluwafemi of ERA/FoEN said: “We urge the Speaker and the entire members of the House to side with the people rather than with promoters of privatisation who put profits before the right to water which is upheld as a human right by the United Nations.”

Comrade Sani Baba, sub-regional secretary of PSI, stated: “PPP promoters in the water sector advance arguments that are tailored to dousing apprehension of workers towards the initiative but time and again, and global experience shows that workers get laid off and rate hikes follow. The Lagos House of Assembly should reject this initiative because that is the path this PPP arrangement will follow.”

In the same vein, Comrade Abiodun Bakare, the state secretary, AUPCTRE, said that the Lagos state government must of utmost priority ensure adequate funding for the water sector. This administration must also investigate funding that was expended on expansion of water infrastructure by the immediate past Group Managing Director of LSWC.”

At the end of the protest march, the group delivered a petition demanding among others, that the

Speaker use his good office to ensure the lawmakers make laws for the benefit of all Lagos residents and not a few privileged corporations. They urged the House to:

ALSO READ:  Open defecation described as major cause of epidemics

The Speaker was personally urged to: