August 10, 2017 Comments Off on Tobacco proliferation and threat to youths, underage 1,103 Views

The National Youth Service Corps (NYSC), in partnership with the Nigeria Tobacco Control Alliance (NTCA), during a rally held in Abuja on Thursday, August 10, 2017, expressed support for tobacco control polices promoted by the Federal Minister of Health. Akinbode Oluwafemi, Chairman, NTCA, says in this presentation to Prof Isaac Folorunso Adewole, the Health Minister, that youths and underage are now the target of tobacco corporations 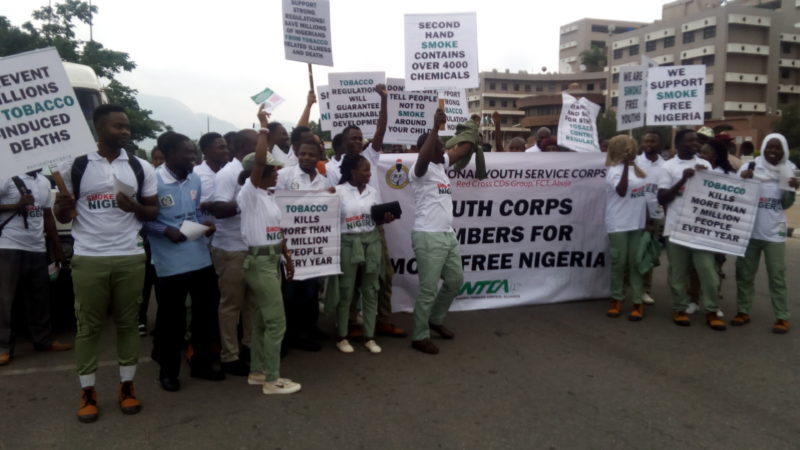 As has been amplified by the World Health Organisation (WHO), tobacco kills nearly six million people annually and, if current trends continue, it will kill more than eight million people worldwide by 2030. A large chunk of these deaths will come from developing nations like Nigeria.

For the NTCA, the signing of the National Tobacco Control Act on May 25, 2015 provides the legal framework for the protection of present and future generations of Nigerians from the devastating health, social, economic and environmental consequences of tobacco use and exposure to tobacco smoke. This singular legislation gives effect to the obligation to protect citizens against tobacco-related harms in the promotion of health and other human rights as contained in the WHO Framework Convention on Tobacco Control (WHO-FCTC) and other related treaties to which Nigeria is a Party.

We commend the efforts of the Ministry of Health at ensuring optimum quality health for every citizen of this country. We are particularly enthralled by the announcement on the occasion of the 2017 World No Tobacco Day that the Nigerian government would commence the implementation of nine provisions of the NTC Act that do not require regulations. This news is particularly refreshing to us when viewed from the prism of the tobacco burden our nation carries because of the tobacco industry target of the youth as replacement smokers for a dying older generation.

The implementation of the nine life-saving provisions as we await the full implementation of all sections of the Act will send a message to tobacco corporations and indeed the global community that Nigeria is serious about ensuring the wellness of its people in line with recommendations of the WHO-Framework Convention on Tobacco Control.

This feat notwithstanding, there are still some issues on the table which we believe your intervention will address.

BATN and the Health of Nigerian Workers

We would like to revisit the reported violation of Nigeria’s labour laws by British American Tobacco Nigeria (BATN) which elicited a response from the Ministry of Labour and Employment via a fact-finding visit to the Ibadan factory of the company where the alleged infractions occurred. Unfortunately no report of the finding has been made public and we do not know why.

Mr. David Folarin – one of the violated workers – died of his ailments last month without getting justice.

Folarin and the other ex-workers of BATN accused the firm of deliberately exposing them to tobacco hazards and other poor factory conditions that cumulatively led to their current poor state of health. Those still alive live with strange ailments that have defied medication and a burden on their already meagre finances.

BATN was also accused of sending ill workers to particular hospitals whose services were solicited to cover up the workers’ injuries even though documents that show these workers were in optimal health at their entry into the company exist. The identified hospitals still operate with impunity.

The workers describe sub-human conditions in BATN Ibadan factory where they were forced to work without protective gear.

It is no longer in dispute that BATN and other tobacco entities operating in Nigeria continue to exploit the absence of Regulations for the implementation of the NTC Act to  continue aggressive campaigns targeting our kids and young ones represented here by members of the National Youth Service Corps (NYSC).

The youths have been the target of the secret smoking parties orchestrated by BATN across the country to conscript first time smokers. At these illicit parties supposed role models that the youths look up to, are recruited to perform “all night” while smoking tobacco products.

Worse is the fact that the youths and underage are now the target of tobacco corporations’ inundation of the Nigerian market with flavoured brands of cigarettes aimed at stoking appeal.

The situation is grave and requires speedy response. The support which our youth corps members have come to show for your leadership as helmsman of the Federal Ministry of Health is in sync with NTCA perception of the achievements of the ministry and opportunities that still exist for more milestones.

Like the NYSC members, we support the call for a fast-track of effective regulations for implementation of the NTC Act. We see our youths as agents of positive change, and not replacement smokers for an older generation of smokers who we view as victims of the tobacco industry stranglehold on lungs.

We assure you that the organisations we represent and the entire Tobacco Control community are ready to support the Federal Ministry of Health in its policies aimed at safeguarding the health of our citizens.