Threats to small-scale food production in Nigeria, by IIED, Oxfam

December 6, 2012 Comments Off on Threats to small-scale food production in Nigeria, by IIED, Oxfam 847 Views

A new report released on Thursday has identified large-scale land acquisitions and other commercial investment in agriculture in Nigeria and three other countries as threats to small-scale food producers. 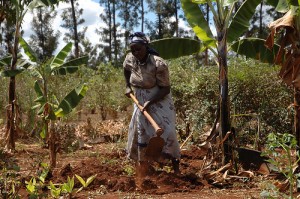 Prepared by the International Institute for Environment and Development (IIED) and Oxfam, the report is titled: “Tipping the Balance: Policies to shape agricultural investments and markets in favour of small-scale farmers.”

Apart from Nigeria, the study also surveyed Guatemala, Tanzania and The Philippines.
“Small-scale farming in Nigeria is characterised by unequal access to key resources and low levels of investment. The policies shaping investment include expansion of outputs through agricultural projects, subsidies on inputs, agricultural insurance, and policies on investment promotion, agricultural finance, land tenure, and tax, which are designed to shape investment in a positive direction.
“However, discrimination is widespread in three areas: land, finance, and input supply policies.”
The report stated that one important policy element that could help increase women farmers‘ access to extension services entailed a commitment to recruit more female agricultural extension staff.
“In recognition of this, the Nigerian government‘s Women in Agriculture Programme is trying to ensure that the extension service in each of the country‘s states has female extension workers at every level of operation, from state headquarters down to the field level,” it added.
It identified the non-involvement of representatives of smallholders and women in agricultural policy decisions, such as the Association of Small-Scale Agro-Producers in Nigeria (ASSAPIN) and the Nigerian Women Agro-Allied Farmers Association, especially considering their centrality to employment and income generation.
According to the report, ASSAPIN and the Voices for Food Security coalition in Nigeria have developed a framework for engaging in the design (review) and implementation of the Agricultural Transformation Agenda.
The report also stressed that a participatory framework for agricultural policy design and implementation should extend to small-scale traders and processors, such as the National Association of Nigerian Traders and women involved in marketing associations.
While highlighting the difficulties that small-scale farmers face in accessing finance, the report stated, “The Ogun State Government is to manage the sum of N1 billion ($6.3 million) for on-lending to small-scale farmers, but until now no money has been disbursed, and the state has been busy trying to identify genuine farmers.”
It disclosed that some commercial investments in agriculture are undesirable under any circumstances, for example if investments lead to large-scale clearances; or have no connection to or multipliers with the domestic economy; or privilege just a small group of the rural population; or make no contribution to domestic food security.
The report stated further, “But there is a strong economic rationale for a disaggregated approach to investment that caters for the three rural worlds, to bring better market opportunities, technology, and – of particular importance to the landless and women – jobs, as well as reforms that increase their access to and control of natural resources.
“The nature and relative importance of policy levers will vary in different contexts – such as the extent of landlessness. But if agriculture is to support investment in the smallholder sector, then policy will need to do more than attract corporate investment. It will need to recognise smallholders themselves as the main investors in agriculture. Policy biases and structural exclusion of smallholders and of women will have to be tackled with less tokenism and more vigour, going beyond policy formulation to implementation.
“As we head into an uncertain era of extremes in commodity prices, climate change, and generation change, with disillusionment with farming livelihoods deterring young people from going into farming, getting this policy environment right for investments and markets is more important than ever.”
By Akinpelu Dada

Previous: NEMA slams states, LGs’ attitude to disaster management
Next: ‘Doha deal is as empty as a desert mirage’