The vanishing legacies of Okoroba

One would be more saddened by the faster decline of the environment and usual attractions of the neighbourhood of Okoroba, in Nembe Local Government Area of Bayelsa State. Indeed, the reduction of the countryside would bring one to the similar mood of ‘The Sea Eats Our Land’, a timeless poem by ‘Kwesi Brew’. While the Brew’s dirge (a poem mourning the dead) laments the ‘death’ of Keita island, a village in his native Ghana, by the natural agents of a free sea-tide erosion, the unhappy situation of the Okoroba neighbourhood, is the steady destruction of its God-given environment, through unending oil pollutions, deforestation and acute poverty of its inhabitants, mainly by decades of oil exploration. 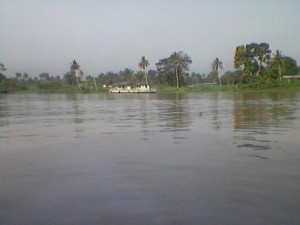 However, despite the reduction of its environment, the neighbourhood, particularly Okoroba town, has often been described by tourists as ‘serene destination’; ‘a tourist delight’; ‘a pearl in the creeks’; for its natural attractions. Okoroba town lies on Latitude 4.6, Longitude 6.4 and 9 metres above the sea level.

The ‘nature imbalance’ of the Okoroba habitat and the need to reverse it, has always been a nagging issue, especially in the echoing days of the early 1990s, when Ken Saro-Wiwa, the martyr environmentalist and social crusader, led few of his associates like Ledum Mittee, Oronto Douglas and Nnimmo Bassey etc., in a concerted effort to reduce the habitat destruction, and the poverty that became the unfortunate inheritance, not only of his (Saro-Wiwa) native people of Ogoni, but by the entire Niger Delta region.

Presently, the ‘Ogbia land’, as Okoroba and the adjoining communities are also called, has turned an environment and a living much more devastated than the horrible descriptions once carried by the late Saro- Wiwa, and his companions to the word view.

When undertaking the boat journeys to Ogbia land, either from the over three hours distance from Brass, in Rivers State, and the opposite two hours direction from Ogbia town, in Bayelsa the destruction of the habitation is always obvious.

Like the ornithologists (birdwatchers or bird lovers) would say, ‘Usually, Birds are the first pointer to a healthy or diminishing environment’.  And that the regular presence of Birds, in flocks and or in isolations, would portray a balanced habitat, while their shortfall or non-presence signifies the opposite.

Whatever happened to the lively flocks of the waver birds and the hornbills; the leggy storks and the migratory swallows; the kingfishers and others that used to slap the flowing rivers and search for prawns as food?

Where were the numerous troops of monkey that used to leap about its mangroves, which brought to the area; some useful studies like that of the West Africa Primate Group, guided by renowned primatologists (scientists of the study of monkeys) like Prof John Oates and Katty Gonda, with the drive to save the various species of the Okoroba Community Forest land for future generations?

Obviously in pains, George Ediegberi remarked that the usual oil spills have seriously damaged the once abundant natural fish stock and farmlands, which are the primary sources of livelihood to inhabitants of the area.  Ediegberi, a genetic expert from Nembe, also harped on his fears; ‘’If the plundering of our environment and livelihood goes unchecked, and part of the oil proceeds is not immediately invested in the very land that produces it, all the other oil producing communities in the area would have been doomed like Oloibiri.’’

On about midway distance between Ogbia and Nembe, is located Oloibiri town, bearer of the first oil well in the country. ‘’Today, Oloibiri is a disserted town, which, in spite of its huge oil wealth, has no presence of social amenities to show for it. Unfortunately, Oloibiri is now a mockery symbol of the neglect of oil-bearing communities of the Niger Delta region,” Ediegberi regretted.

Usually, in the area there is a very strong presence of oil spills, which the various respondents identified as the major cause of the losses.  All over the smell of oil infiltrates the air and could make one to suffocate out.  The top water of the main Ogbia River and its network of creeks were laced with oil paraffin, while the sideways and its plants were lined with thick layers of dark oil greases. Perhaps, it has not been cleared for a long time, and capable of causing great losses to livelihood and ‘biodiversity’ (a wide variety of plant and animal species living in their natural environment).

‘’The oil spills have not been cleaned or mopped for years, even though they occur now and then. The multinational oil companies, instead of cleaning off the spills, allowed them to gather and cause more harm. When attempts were seldom made by the oil firms to clear the mess, some unguided youths of the area would disrupt the process. In most cases it is the same oil firms that mastermind the restive youths to carry out the disorderly acts, as they hide under the guise, because they want to avoid paying the cost of cleaning up’’.  Lamented Stanley Amoda, from Nembe town.

In April, 2011 the frequent oil spills in the area, was said to again reach a highpoint, when the Environmental Rights Action (ERA) a frontline national NGO, received an SOS of a fresh oil spill and fire which ravaged the Okoroba community, with large farmlands and water-life loss along the Agip/Brass pipeline.

‘’When the spill took place in 2011 in our community, it disrupted our livelihood just as it disenfranchised us from casting our votes in the general election, which took place the same time all over the country. Since then, not much has been heard about clearing the oil toxic to bring back our farmlands and fish ponds. Either, no compensation was paid for the huge losses incurred’’; Madam Asokari, a peasant from Okoroba lamented, as she asked somewhat helplessly; ‘’Now, what legacies do we leave for our children?

The oil facilities in the community are said to be owned by two giant-oil multinationals; Shell Petroleum Development Company and the Nigerian Agip Oil Company, operating in the area.

From afar and near oil facilities in Ogbia land, like other oil bearing communities of the Niger Delta, gas flaring, the persistent menace, rule the airspaces.  It produces numerous dark burns spoiling the cloudless skyline in daylight, and the various tongues of flame that replace electricity at night. Known as a major cause of ‘global warming and climate change’, the uneasy heat from the burning furnaces, alone reduces the cooling effects which the body of water and vegetation will ordinarily give.

Unhappily, Agodi said again; ‘’In the Niger Delta region, one of the few and worst cases of gas flaring in the world, multinational oil companies and their agents still play the delay game with the deadly flare and its end date, whereas it has been banned, around the globe’’.

The fast and awkward logging taking place in the once normal Community Forests of Okoroba, in the former Edoma National Forest reserve, could be apparent from the frequent heaps of logs and sawn wood, found along the boat routes, waiting to be ferried away. The original ecosystem of the Ogbia zone, once came into limelight, as it was gazetted by Rebecca Kormos, as part of a global Conservation Action Plan, by the International Union for Conservation of Nature (IUCN) and other conservation bodies. The Community Forests of Okoroba is enclosed in the vast Niger Delta mangrove, known as one of the world largest and richest in biodiversity composition.

One would have been afraid that ‘Angala’, could go out of existence like some of the key trees of the mangrove that are daily threatened.  Although she faces harmful threats by the continuous oil spills, which hangs on to its base, making her to shed the leaves, it large population, however, makes brighter her chances of surviving the menace.   The biological name of ‘Angala’ cannot be now recalled, but it is an Ijaw name for the visible mangrove tree which has many roots above the ground, like the human walking stilts. Because of its adorable and passionate name that sounds like ‘Angela’, the common name of a girl, ‘Angala’, the common mangrove tree of high medicinal and economic importance, was preferably picked as a flagship name for the now-rested environmental magazine, jointly published by Pro-Natura International and the Nigerian Conservation Foundation (NCF).

Commenting on the way out of the fast decline of the environment and its adverse effects on the unlucky Niger Delta people, Mr Ossain Azibalua, a national youth leader, called on the indigenes ‘’to always apply non-violence and the rule of constructive engagement, instead of the violent approach’’. This, he said, ‘’is the style of some of our leaders of note, like the late Saro-Wiwa and Oronto Douglas’’.