July 14, 2013 Comments Off on Pandemonium as windstorm leaves Ekuri forest in ruin 886 Views

Residents of Ekuri Community in Akamkpa Local Government Area in Cross River State in Nigeria are grief-stricken. Reason: Penultimate Saturday, they lost about 10 square kilometers of biologically diverse forest when a windstorm hit the neighbourhood, destroying a considerable part of the famous community forest on the northerly axis contiguous with the Ukpon Forest Reserve.

Eyewitnesses say the storm left few trees standing as emergent and under-storey vines, rattans, bush mango, fruit trees and afang, among others, are left in ruins, “creating an open space of unimaginable distance except the hindrance of hills.”

The Ekuri Forest is believed to be the largest and best communally-managed forest in Nigeria.

Recounting the loss, the Village Head of New Ekuri, Chief Abel Egbe, laments: “The storm is the first of its kind in the history of Ekuri community. The destruction of this forest is unquantifiable, considering the economic, social, environmental, cultural and spiritual values of the affected area and is not a colossal loss to Ekuri people alone, but neighboring communities, Cross River State, Nigeria and the global community.”

Expressing gratitude to the Almighty the no lives were lost as no villager was in the forest when the storm struck as, according to him, gatherers of bush mango and other non-wood products had returned to the village the previous day to sell products after four nights in the forest.

ALSO READ:  Nigeria at 60: Such diversity that threatens her unity

Madam Margaret Ogar, one of the oldest women in Ekuri, wept inconsolably, lamenting the loss of the bush mango trees which the community members, particularly the women, are depended on for seasonal incomes that flows steadily into the pockets of individual households, contributing to improved livelihoods and poverty alleviation.

She says: “The affected area has the highest concentration of bush mango trees, achi seed trees and rattans that have sustained our livelihoods and their destruction is a calamity, an open invitation to poverty and weakening of social cohesion that knit the community together. What a devastating news I will bring to our ancestors when I pass away that their contributions in the conservation of our forest using indigenous knowledge and passed onto us  is no more!

“We are finished as our inheritance, culture, lifestyles, medicinal plants, fresh water, array of vegetables and fruits that have naturally made us healthy are destroyed.”

She adds that her children, grand and great grand children will suffer severely as it will take another 50 or more years for the affected forest to regenerate naturally before acquisition of capacity in the provision of goods and services.

Another community member, Chief Raphael Akamo, notes that the destruction of the forest habitat has apparently killed many animals including the endangered species, forcing the survivors to migrate to other forests. He said that buffalo inhabits this area and their forced migration to other forests is “a big blow to Ekuri community” as the area is already set aside for eco-tourism as in the land use plan of Ekuri community forest.

A retired headmaster, Innocent Agbor, submits: “The conservation of Ekuri forest by the Ekuri Initiative has enhanced generation of incomes from avalanche of non-timber forest products harvested by students during holidays to support their education. Now that the source of income generation is destroyed, then education will suffer, illiteracy, unemployment and poverty will increase in Ekuri community.”

A youth leader, Bernard Ogar: “Experience has shown that youth restiveness in other communities is largely attributed to unemployment and poverty. The effects of the destroyed forests will aggravate poverty for years; turn the tide against social cohesion in place of anti-social vices and the existing togetherness in Ekuri community is seriously threatened.”

One of the oldest men in the land, Pa Akwa Ambo: “We know that when you open the forest uncontrollably, you expose yourself to unnatural storm, hence one of the reasons for our community’s efforts and commitments to conserve our forest.  But for centuries, we have kept our forest relatively intact, then why the unnatural windstorm? The things we hear that happens in faraway places are here with us today and I am afraid of what the world will become tomorrow when communities that have conserved their environment suffer same like those that have destroyed theirs.”

Village Head of Old Ekuri, Chief Stephen Oji: “The expected revenues from the payment for ecosystems services from Ekuri Community forest under the Reducing Emission from Deforestation and Forest Degradation (REDD+) is eroded as the amount of metric tons of carbon in destroyed trees and other ecosystem services – biodiversity, water, landscape – cannot be accounted for to warrant payments later when the programme kicks off fully. I praise our distinctive efforts and commitments to conserve our forest but see how the best we have done is lost in a twinkle of an eye!”

Head (Technical), Ekuri Initiative, Edwin Ogar: “The Ekuri community calls on government of Cross River State, Federal Government of Nigeria, NGOs, international development agencies, corporate bodies and individuals to come to her aid to alleviate the long sufferings and hardships the people will face for years due to loss of livelihood sources as a result of this environmental disaster. This clarion call for supports is to stabilise the hardships, take off further pressures and boost conservation of remaining forest and regeneration so that the REDD+ earmarked for the Ekuri community is realised.” 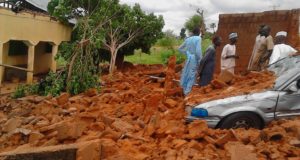 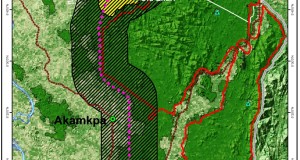 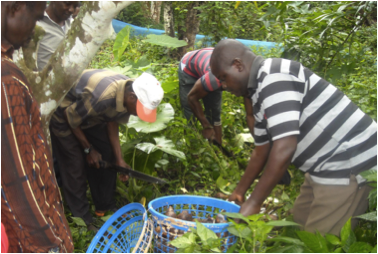 The Cross River State Government has commenced the clearing of the pristine Ekuri community forest, ...