With fewer than 100 Sumatran Rhinos surviving in the wild, the species will likely become extinct unless the Indonesian Government urgently implements the Sumatran Rhino recovery plan, warns the International Union for the Conservation of Nature (IUCN) as the world celebrates World Rhino Day. The remaining 100 Sumatran Rhinos represent less than half of the population size estimated during the last IUCN Red List assessment of the species in 2008. 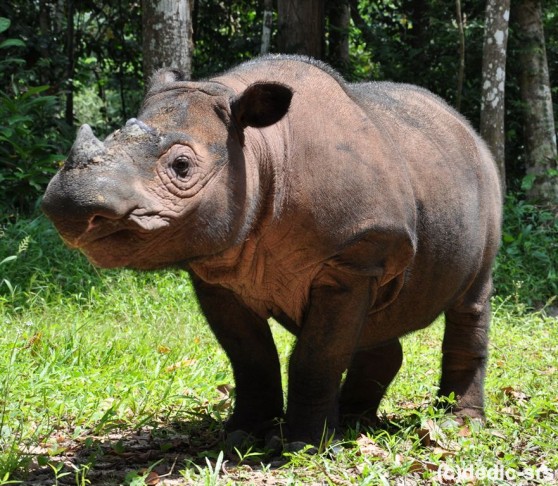 “Malaysia was once regarded as one of the last strongholds for Sumatran Rhinos, thus losing them from this country presents a major blow to the survival prospects of the species,” says Simon Stuart Chair of IUCN’s SSC. “With the ongoing poaching crisis, escalating population decline and destruction of suitable habitat, extinction of the Sumatran Rhino in the near future is becoming increasingly likely. The Indonesian Government urgently needs to develop intensive protection zones with significantly enhanced security enforcement in all sites where Sumatran Rhinos still occur.”

The initial catastrophic population decline in Sumatran Rhinos was primarily driven by poaching for use of horns in traditional medicine, coupled with continued habitat loss and infrastructure development, which has led to fragmentation of key forest habitats of the species. Today, the species’ populations are small and isolated, which lowers their breeding rate, adding to the ongoing threat from poaching. Unable to breed regularly, isolated females are at risk of developing tumours in their reproductive tracts leading to infertility and further exacerbating the decline.

Urgent measures for saving the Sumatran Rhino were agreed in October 2013 at the Asian Rhino Range States Meeting in Indonesia, and have since been used to develop a new recovery plan for the species. The Indonesian Government now needs to allocate funding for the implementation of the plan, and to ensure that a system is in place to make urgent, rapid and bold decisions as the plan is implemented, according to IUCN.

Alongside developing intensive protection zones and consolidating isolated animals into larger populations, managed breeding is one of several key strategies needed to save the species. As part of the global effort to save the Sumatran Rhino, a young male named Harapan, born at the Cincinnati Zoo, will join five other rhinos at the Sumatran Rhino Sanctuary in Sumatra’s Way Kambas National Park next month.

“It is hoped Harapan’s relocation will further accelerate conservation breeding of the species in captivity,” says Bibhab Kumar Talukdar, Chair of the IUCN SSC Asian Rhino Specialist Group. “But the long-term future of the species will ultimately be decided by the actions of the Indonesian Government and civil society. We need effective collaboration between government agencies and conservation institutions, allocation of significant funds by the Indonesian Government and international donors, as well as strengthened support from the public.”

The Sumatran Rhinoceros (Dicerorhinus sumatrensis) is the most threatened of all rhino species due to its rapid rate of decline. It is also the smallest and the hairiest species and the only Asian rhino species with two horns.

Previous: NEMA warns of imminent danger as flood ravages Kaduna
Next: ‘Strong, fair’ Indian INDC may be unveiled on Wednesday