June 15, 2021 Comments Off on Stepping up global efforts, only way to safeguard environment – UN President 516 Views

The President of the UN General Assembly, Mr Volkan Bozkir, says stepping up global efforts to combat land degradation is the only way to safeguard health and the environment against future threats.

Bozkir spoke on Monday, June 14, 2021 at the UN headquarters in New York at a high level dialogue on desertification, land degradation and drought.

According to him, stepping up global efforts to combat land degradation is the only way to safeguard food and water security, reduce greenhouse gas emissions and ward off future threats to health and the environment.

While outlining the cost of inaction, Bozkir described restoring nature as “the test of our generation”.

“Our planet is facing an environmental crisis that encompasses every aspect of the natural world, land, climate, biodiversity and pollution on land and at sea.

“Our existence and ability to thrive in this world is entirely dependent upon how we reset and rebuild our relationship with the natural world, including the health of our land,” he said.

The General Assembly dialogue, the first of its kind in a decade, is being held at a time when half of all agricultural land is degraded, threatening livelihoods and also driving extinction and intensifying climate change.

“Without a change in course, this will only get worse.

“By 2050, global crop yields are estimated to fall by 10 per cent, with some suffering up to a 50 per cent reduction.

“This will lead to a sharp 30 per cent rise in world food prices, threatening progress on hunger and nutrition, as well as a myriad of associated development goals.

“The fallout could also see millions of farmers pushed into poverty, while some 135 million people could be displaced by 2045, upping the risk of instability and tension,’’ he said.

Bozkir brought countries together to galvanise international cooperation to avert further degradation and revive degraded land, ahead of UN summits this year on the topics of land, biodiversity and climate.

“The organisation has been clear on what steps they need to take.

As the world embarks on 10 years of action on ecosystem restoration through 2030, Bozkir said countries should also apply lessons learned over the decade to fight desertification.

“Land restoration must be at the heart of existing international processes, such as the Nationally Determined Contributions (NDCs) to combat climate change, the post-2020 Global Biodiversity Framework, and COVID-19 recovery and stimulus plans,” he added.

With “unsustainable agriculture” being a main driver of desertification, the assembly president called for governments to conduct national dialogues on agricultural reform ahead of the UN Food Systems Summit in September.

He also emphasised the need for “greater synergy” between peace, development and humanitarian action, with the Sustainable Development Goals (SDGs) serving as a roadmap.

Cooperation here can be achieved through universal implementation of a UN framework on disaster risk reduction which, he said, would enhance prevention efforts.

He further stressed the need to devote a greater share of climate finance to forests and agriculture.

“For an estimated $2.7 trillion per year, we could transform the world’s economies by restoring natural ecosystems and rewarding agriculture that keeps soils healthy.

“Also, we could transform the economies with incentivising business models that prioritise renewable, recyclable or biodegradable products and services.

“Within a decade, the global economy could create 395 million new jobs and generate over $10 trillion,” he said.

He said the rights of the world’s more than one billion agricultural workers must also not be forgotten.

“Most do not own the lands on which they work; currently, one per cent of farmers control more than 70 per cent of the world’s farmlands.

“Investing directly in land workers is an investment in our land and our planet’s future.

“When we enable workers to invest in their land, we support agricultural productivity,’’ Bozkir stated. 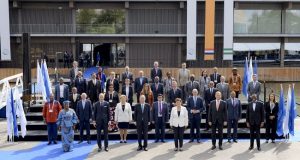 No less than 10 million tree seedlings were planted by state governments in the North-East ...