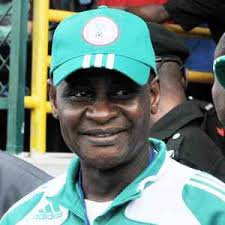 Mr. Maigari was arrested alongside Musa Amadu, the NFF Secretary-General, and Chris Green, a board member.

The NFF has been rocked by leadership crisis for months. The Minister of Sports and Chairman of the National Sports Commission, Tammy Danagogo, was quoted Monday as saying that the tenure of Mr. Maigari had ended.

The embattled NFF chairman was first arrested in July as he returned from the World Cup in Brazil. The arrest followed an order issued by a Plateau State court asking the NFF executives to step aside. Mr. Maigari’s removal as the NFF chairman led to the suspension of Nigeria by world football governing body, FIFA.

The suspension was lifted after Mr. Maigari was reinstated but he was controversially impeached thereafter, accused of financial abuse and corruption.

Shortly after the impeachment July 31, Mr. Maigari was again whisked away by SSS operatives from the Serob Legacy Hotel, Abuja where the NFF held a congress. He was again reinstated after the intervention of FIFA.