Some states in the South-South Geopolitical Zone in Nigeria have decried the huge ecological problems, saying they are threatening the existence of some communities.

A survey conducted showed that poor funding, absence of comprehensive plan and non-collaboration between the federal and states government limited efforts to mitigate the ecological problems.

In Cross River, Mr Gabriel Adie, the Head of Flood and Erosion Department in the state’s Ministry of Environment, said flood and erosion remained the major ecological challenges in the state and lack of adequate funding had worsened the situation.

He faulted the National Ecological Fund office in Abuja for awarding contracts for the projects in the state without involving the state government.

Adie lamented that most of the coastal communities in the state were on the verge of being wiped out by flood.

“Agwagune, in Biase LGA, because of the nature of its soil which is made up of impure limestone that gets dissolved easily when it comes in contact with water; so erosion takes place and gradually the communities are washed into the river.

“In Calabar, we have over a 100 erosion sites with serious gullies that are over 50 feet deep in areas like Inyangasang, 8th Miles, Bakoko axis, Ikot Uduak by Ekpo Archibong Crescent and others,” he said.

Adie said that initially money was sent from the Ecological Fund office in Abuja to the state to tackle some of the challenges, especially in order of importance but was later stopped.

He said there were many threatened areas in the state like in Bakoko, where the inhabitants had abandoned their houses and ran away for safety.

‘’That is one of the areas we would have preferred the interventions to be given priority but the powers that be from Abuja selected the areas they felt convenient for them to intervene without recourse to the state.

‘’Some time ago, the ministry was just invited to witness the handing over of reclaimed sites in Uyanga, Ojor and Isonba, Uwa Erosion Control Works in Biase LGA, the work was done without our involvement.

“Earlier, when funds were being sent to the state to handle these projects, the almost four kilometre tunnel on the Muritala Mohammed Highway was constructed without which Calabar would have been submerged as a result of flooding.

“There was also the construction of a channel that carried water from WAPI Junction to Ekpo Abasi and the road to the Ranch Resort, all these were made possible because earlier the allocations were sent to the state,” he said.

An official of the ministry, who pleaded anonymity, said that the state did not even know the criteria the ecological office used in selecting which ecological problem it handled as it awarded contracts in Abuja and came down to implement and monitor them.

He, however, said that the funds from the ecological office to relevant agencies in the state were stopped because of massive misappropriations.

On his part, Prof. Imo Ekpoh, the Dean, Faculty of Environmental Sciences, University of Calabar, said that erosion and flooding were “the twin evils in Cross River’’.

He said that flash-points of flood included Target by Goldie Junction, Maine Avenue and other areas in Calabar.

“We also have the challenge of erosion which is one of the results of flooding as the waters overwhelm the soil and it begins to cave in creating gullies and ravines in many areas in Calabar like in 8th Miles, Edim Otop and others.

“I know of the ecological fund and how it has been used for some of the interventions in the state but we are more conversant with Nigeria Erosion and Watershed Management Project (NEWMAP) that has helped in tackling many of these issues.

“NEWMAP has carried out a lot of projects in the state without which a large part of Calabar would have been washed away,” he said.

In Edo, an environmental activist and Director, Health of Mother Earth Foundation (HOMEF), Mr Nnimmo Bassey, said that the major ecological problems across the nation were hardly addressed.

“For major ecological responses such as gully erosion are handled by NEWMAP, utilising World Bank resources.

“The nation requires more conversations on the use of the well-intentioned ecological funds so that citizens have a say on what needs to be done, by whom, where and how.

“One way to handle the problem is to develop a drainage master plan for the major cities in the state. That has to be the starting point.

“Without a comprehensive plan and an implementation of the plan, the situation will remain one of the measures that may end up being counterproductive.

“For example, drainage channels could be built but lead to the creation of more ecological problems if they empty into vulnerable landscapes,’’ he said.

However, Mr Lucky Wasa, the Permanent Secretary, Ministry of Environment and Sustainability in the state, said that the ecological challenges spread in some parts of the three senatorial districts of the state were being frontally tackled by the government.

He said that the government had committed huge resources to address ecological problems confronting the state.

Wasa said that, although some of the projects were completed, others at various stages of completion, the state did not have the fund capacity to fully address the problems

Others are AAU, Emu, Ugboha and Ibore in Edo Central and Igbe Road and Oshiobugie in Edo North Senatorial districts.

“In Emu, the gully practically divided the community into two.

“We are also desilting water injection scheme in parts of Benin and desilting the drainages as part of efforts to avoid flooding.

“While other states are crying, Edo has been able to reduce to the barest minimum the impact of flooding,’’ he said.

On the funding of the erosion projects, Wasa said the state government ’is the one funding these projects and the Nigeria Erosion and Watershed Management Project (NEWMAP) is also part of it.’’

In Bayelsa, the state government said it was yet to receive any ecological fund to tackle the ecological challenges in the state.

The state government on Aug. 18, during a courtesy call by some traditional rulers whose communities are threatened by erosion in the state, urged the Federal Government to deploy ecological fund to assist the state in tackling erosion and other ecological problems.

An environmentalist, Project Officer/Head of Niger Delta Resources Centre, at Environmental Right Action/Friend of the Earth, Mr Morris Alagoa, urged the relevant authorities to release the fund meant for tackling ecological issue to the state.

He said that one of the major problems facing most communities in Bayelsa was coastal erosion, which was affecting communities such as Akassa and Odioma in Brass LGA; Ayama, Onuebum, part of Otuokpoti, all in Ogbia LGA.

Alagoa said in Famgbe, Yenagoa Local Government Area, the coastal erosion had washed major parts of the community away.

“All these years, we have been hearing that ecological fund has not been released for Bayelsa to tackle the numerous challenges facing the river banks.

“We want the fund to be released to the state and part of the 13 per cent derivation to be put into ecological issue ravaging the state,” he said.

Alagoa recalled that most of the communities that were piled were done by the late Melford Okilo, when he governed old Rivers State and lamented that since then nothing had been added.

In another development, an official of the Ministry of Environment, who claimed anonymity, said Bayelsa had been complaining of non-released of ecological fund for over two decades.

He lamented that government would not be ready to tackle the issue of ecology until parts of the state was washed away by erosion.

The official called on Federal Government to inspect the level of damage done to most coastal communities in Bayelsa.

Also complaining of no fund from ecological office, Akwa Ibom State Government said it had made several efforts to get the attention from ecological funds office but to no avail.

According to Mr Charles Udoh, the Akwa Ibom Commissioner for Environment and Mineral Resources, the state government had submitted designs to that office but nothing positive had come out yet.

“But that doesn’t mean we have to give up, even if it is just for posterity; we are giving our best to see that if eventually they will see reasons and come to our aid,” he said.

The commissioner appealed to the authority responsible for the ecological funds to look into the direction of Akwa Ibom state, considering that the state remained one of those contributing the highest percentage of income to the coffers of the Federal Government.

Udoh said that the ecological problem facing the state due to the peculiarity of its location as Mangrove Savannah Region, rang from flooding, erosion to pollution.

‘’If we throw into the mixed, the challenges that we are facing from the activities of the oil company in the region, then, you could see that we are confronted with mammoth challenges when it comes to the ecological issues.

“Erosion has not been friendly, flood had been there even though it is global, flood prediction level will go up this year like we have witnessed, then of course, pollution is man-made.”

He, however, observed that no part of the globe could boast of ending flood menace as “it is a natural phenomenon’’ that could only be mitigated and not stopped.

He said that what the Akwa Ibom government was doing was continuous desilting of drains and creating awareness and getting the public to be involved in building erosion facilities.

In Rivers, Mr Erastus Awortu, the Chairman, Andoni Local Government Area of the state, called for collaboration between the state/federal ministries of environment, especially in terms of funding and selection of projects.

He said the one per cent of the Federation Account would not be enough to tackle huge ecological challenges considering the amount needed to mitigate such challenges such as ocean surge in Andoni area council.

Awortu said already, the council had begun to map out some communities for ‘shoreline protection,’ adding that the Ataba embankment project was part of efforts assigned to tackle the challenge of ocean surge in the area.

He said that this was prompted by the fact that Andoni LGA shares same topography with eastern Obolo LGA in Akwa Ibom, a neighbouring state, which some of its communities had been sacked by ocean surge in 2020.

“Most riverine communities are exposed to ocean surge as they were mostly situated below sea level and handling such disaster as ocean surge is more challenging than what one can possibly imagine,’’ he said.

According to him, the Opobo/Nkoro waterfront embankment was one of the projects completed by the Federal Government in a bid to salvaging some riverside communities from ocean surge.

He, however, disclosed that some similar embankment projects/shoreline protection projects awarded by the Federal Government were rather being abandoned by contractors.

“Ecosystem preservation, which is supposed to occupy a front burner issue for every proactive government has continued to get little or no visible attention at the local councils across the state,’’ he said.

The don, while expressing dismay over the plight of some residents in the state recently affected by flash flooding, stressed the need for respective authorities to begin to take environmental preservation seriously.

“The state is currently suffering from various ecological impacts ranging from flood, soot, ocean surge to greenhouse gas emission, which are threats to human existence and the environment.

‘’It is therefore, necessary to ensure that a more reasonable sum higher than the budgetary one per cent be assigned and duly channelled toward addressing ecological challenges before they get out of control,” Oladele advised. 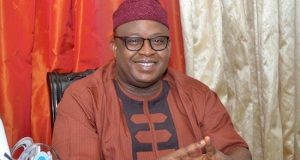 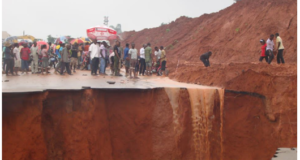 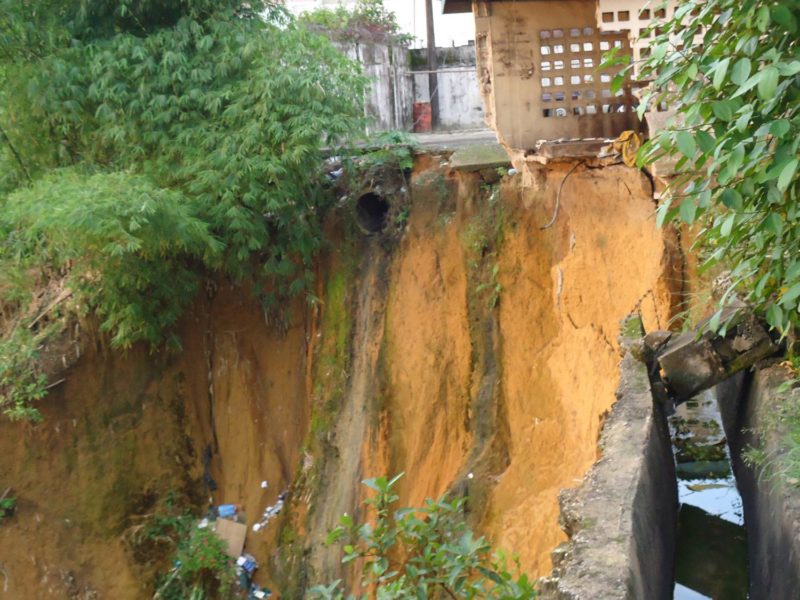 Some communities in parts of the South-South zone of Nigeria have decried the perennial economic ...