Floods are said to have ripped through seven local government areas of Sokoto State, leading to the death of a seven-year-old boy and destruction of farm produce worth N500 million. 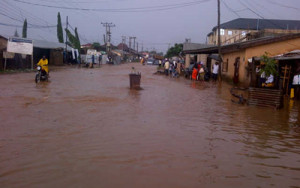 He said that the seven-year-old boy was killed when a wall fell on him after a rainstorm in Umbutu village of Kebbe Local Government area.

According to him, the local government areas that were worst affected by the flood are Rabah, Wurno, Goronyo, Wamakko, Kware , Binji and Silame.

Tanimu said that no fewer than 7, 500 acres of farmland, with maturing farm produce and dozens of villages were completely submerged.

He said that some roads including ‘Yar-tsakuwa-Durbawa and the Unguishi-Kuchi were cut off by the flood. According to him, the flooding became worse after the release of excess water by the Sokoto Rima River Development Authority from the Goronyo and Bakolori dams.

“This was however done after an alert and notices were sent to the agency, Sokoto State Government and the 23 local governments of the state. SRBDA had promptly given the alert and notices to all the stakeholders, while NEMA also did the same,” he added, even as he said that windstorm had blown off several houses in various parts of Kebbe Local Government.

A group of stakeholders that met remotely on Friday,...

Researchers and high-level representatives from relevant ministries, departments and...

UN Secretary-General, António Guterres, has appointed Simon Stiell as the...