President Muhammadu Buhari has assented to the ‎Endangered Species Control of International Trade and Traffic Amendment Act 2016, earlier passed by the National Assembly. 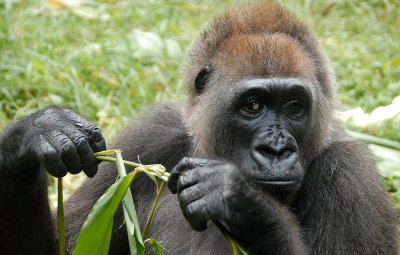 The Cross River Gorilla is an endangered species in Nigeria

Nigeria is a signatory to the Convention on International Trade in Endangered Species of Wild Fauna and Flora (CITES), an international treaty drawn up in 1973 to protect wildlife against over-exploitation, and to prevent international trade from threatening species with extinction. Endangered species is a species of animal or plant that is seriously at risk of extinction.

Enang said: “The President has assented to the bill sent by the National Assembly, The Endangered Species (Control of International Trade and Traffic) Amendment Act 2016.

“The intent of this amendment is to bring the penalty provisions in line with economic realities and to act as a deterrent or deter people from trafficking and trading in endangered species because endangered are preserved of the country.”

The Presidential aide said the intent of the amendment was to bring the penalty provisions in line with economic realities and to serve as a deterrent to people trafficking in endangered species “because endangered species are the preserves of the country”.

According to him, the Act is to discourage trafficking in endangered species and will encourage the culture of the preservation of endangered species. He added that, with the assent, the President had increased the penalties for violations of the provisions in line with today’s realities.

Commenting on the signed bills, the Senate President, Bukola Saraki, who had earlier met with the President behind closed door, assured that more progressive bills would be passed by the National Assembly in the coming years.

“It shows in part, what we have been able to do in the National Assembly and there are many more bills to come and the President is also responding to them.

“For us in the Senate for example, in the last session just this last three months we did much more than what we did in the entire year.

“The National Assembly is settling down and as such you will see much more bill passed for the President to sign.”

Saraki, who joined President Buhari to perform the weekly 2-Raka’at Juma’at prayer at the Villa Mosque, described the fall of Sambisa forest as a great feat.

“This is a great progress from where we are before. If you look at where we were a year and half ago, the challenges we had in that area for us to recapture the place‎, I think is a great feat.

“It shows what we can do as a country when we have the commitment, purpose and the leadership required to do that.

“As we have done that in the North East, I believe the other issue before us is the fight against corruption, the economy, providing jobs, peace in the Niger Delta,” he said.