How renewable energy can save Chilean lives, create jobs, by study

September 1, 2015 Comments Off on How renewable energy can save Chilean lives, create jobs, by study 1,036 Views

A new study has been launched by the Chilean Citizens’ Committee on Climate Change showing that, by switching to 100% renewable energy by 2050, the country could: avoid spending $5.3 billion a year on fossil fuels, save 1,500 lives a year due to reduced air-pollution in Santiago alone, and create 11,000 green jobs. 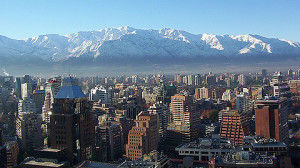 The study, conducted by the NewClimate Institute, is one of a series of reports demonstrating the significant benefits to Chile and other countries – including the U.S., China, Japan, Australia, and the European Union – if they get on track to achieve 100% renewable energy by 2050.

The reports assess the benefits delivered in terms of lives and money saved, and jobs created by their proposed climate action commitments – also known as Intended Nationally Determined Contributions (INDCs) – and what more they stand to gain if they boosted their efforts in line with a fossil fuel phase out.

In December 2014 Chile announced its intention to contribute to international efforts to cut greenhouse gas emissions ahead of the upcoming climate change negotiations taking place in Paris this December, where a new global agreement to tackle climate change is due to be forged. Currently, Chile’s most ambitious proposal under discussion within the government aims to reduce national greenhouse gas emissions 40-45% by 2030. 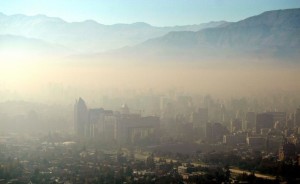 A view of the Chilean capital under a heavy layer of smog. Photo credit: Reuters

However, for the Citizens’ Committee on Climate Change – a diverse national coalition of environmental organisations – this proposal is inadequate and will not achieve the transition that is needed. “The ambition of Chile’s government is insufficient compared to that of other countries in the OECD. It ignores all of the work that will be needed in the coming decades for us to adapt to climate change, particularly considering Chile has been categorised as extremely vulnerable to climate change impacts,” says Matthias Asun of Greenpeace and a member of Committee.

Through the nationwide “MAPS project” (Mitigation Actions Plans and Scenarios) the government calculated a range of models for reducing greenhouse gas emissions by 2020, 2030 and 2050 respectively – none of those models set Chile on the path to achieving 100% renewables by 2050 and therefore would fail to deliver the associated benefits outlined above.

If Chile committed to achieving 100% renewable energy by 2050, a NewClimate Institute report found:

According to experts in Chile, the government’s proposed MAPS models neglect the global requirements established by the international scientific community, since none of the scenarios put forth by the MAPS project would be allow Chile to meet its obligations as part of the global effort to avoid a global rise in temperatures 2ºC above preindustrial levels and limit catastrophic consequences.

Considering the above, and the approval process which the Council of Ministers for Sustainability and Climate Change must now follow for the proposed INDC, the Citizens’ Committee on Climate Change calls upon the Minister of the Environment, Pablo Badenier, to push for raising Chile’s ambitions towards a truly transformative process for transitioning energy generation away from dirty and outdated fossil sources and towards a green, renewable and low-impact environmental one based on sources like solar and wind.

“With the resources that Chile could save each year, we could be funding half of Chile’s new education reform package or investing in more and better sources of renewable energy,” says Karen Pradenas of Fundación Decide and a member of the Committee.

Going further, Javiera Valencia of Fundación Terram and likewise a Committee member, says “This study shows that we are jeopardising lives and wasting financial resources and jobs, simply because Chile is unwilling to make the effort which both the country and the planet need on climate change. Chile emits a small amount of greenhouse gases, but our carbon footprint per capita is approaching France’s, for example. The developed countries are tending to reduce their emissions while we are increasing ours.”