Participants of the Interfaith Rainforest Initiative held on Wednesday June 21, 2017 in Oslo, Norway fear that rainforests are at grave risk. In a statement addressed to Leaders in Government and Business, to Leaders and Followers of Spiritual and Religious Traditions, and to the wider Human Family, the faith leaders say they will act together for the sake of the rainforests and the peoples who live in them, and for the future of the planet. The statement reads: 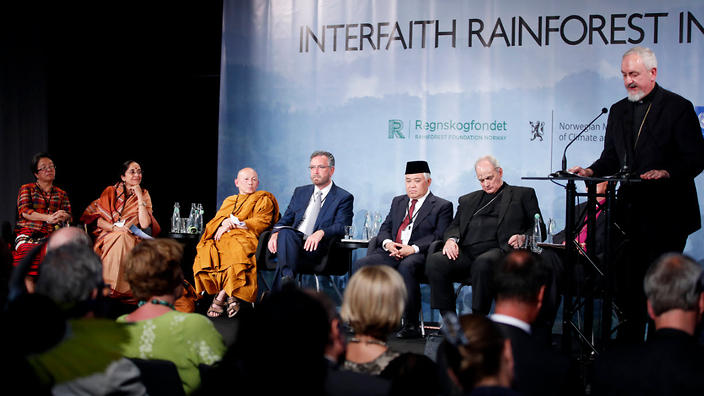 Metropolitan Emmanuel, Vice president of the Conference of European Churches, speaking during the Interfaith Rainforest Initiative in Oslo, Norway

The Earth’s rainforests are an irreplaceable gift.

They support boundless biodiversity, a balanced climate, and the cultures and communities of Indigenous Peoples who live in them. They generate cooling air and rains that water the Earth. They are spectacular, and vital to all life.

And they are at grave risk.

We, people of many faiths and spiritualities, gathered in Oslo to hear the cry of Earth’s rainforests, their flora and fauna, and the people who live in them. We are Indigenous, Christian, Muslim, Jewish, Hindu, Buddhist, and Daoist, joined by scientists who share with us, and open for us, a deeper appreciation of the miracle of the forests.  We are from 21 countries – from Amazonia, the forests of Indonesia, the Congo Basin, Meso-America and South and Southeast Asia and the Pacific Islands, and from the US, Canada, Europe, the Middle East, South Africa, and China.  While from many places, we recognise that we are one human family, that we share one Earth.

These glorious forests make our lives possible. They provide clean air and abundant water.  They store carbon and stabilise the climate, literally around the globe. They provide homes, food, medicines, and livelihoods for hundreds of millions of people. They are dependent on the health and well-being of their indigenous and forest-dwelling peoples, just as these peoples, and all the rest of us, depend on the forests. We are in this together – humanity and forests, people and planet. If forests thrive, we will thrive. Without forests, we all perish.

During our time together, we spoke frankly. We recognised that unrestrained consumption, lifestyles of the Global North, and irresponsible financial systems, devastate the rainforests’ biosphere and ethno-sphere. We listened to accounts of the persecution and murder of Indigenous Peoples and others who protect the forests. We learned about governments unwilling to pass or enforce laws needed to ensure rainforests’ future and the rights and traditions of those who continue to be their guardians.

These realities are haunting. This destruction is wrong. As we formed a community, becoming one out of many, a resolve emerged among us.

We will not allow this to happen.

Together, we affirm the gift of life, our reverence for our common home and for the miraculous manifestation that rainforests embody. We affirm that we are all caretakers of Earth’s rainforests, just as the forests care for us. We embrace the responsibility for ongoing action which that entails.

We commit to form an international, multi-faith rainforest alliance, devoted to the care of these forests and the people who protect and live in them.

We pledge to rally our spiritual and religious communities to act.

We will train our leaders and educate our followers about the urgent need to protect rainforests, sharing the insights of traditional knowledge and science in the service of truth, knowing that without protecting, restoring, and sustainably managing forests, we cannot save Earth from the ravages of climate change.

We will advocate for the restoration of rainforests and the rights of Indigenous Peoples, sharing with leaders in government and business that protecting forests is a moral duty and that failing to do so is an offense against life itself. We will support indigenous and forest peoples to assert and secure their rights, including their free, prior, and informed consent to development on their territories. We will advocate for increased access to finance for the ongoing protection of rainforests. We will work for an end to the criminalisation of forest protectors and for their safety.

We will change our own lifestyles, including our diets and consumption patterns, learning to live in harmony with the rainforests.

Finally, we pledge to continue to work together, to strengthen our resolve, and to act boldly in the months and years to come.  We invite other people of faith and of diverse spiritualties to join us.

A spirit of compassion and truth has been with us as we have met. This spirit awakens hope.  It calls to us.

We have listened together and learned together. In this statement we are speaking together.  Now, we will act together. For the sake of the rainforests and the peoples who live in them, and for the future of the planet, we commit to respond.