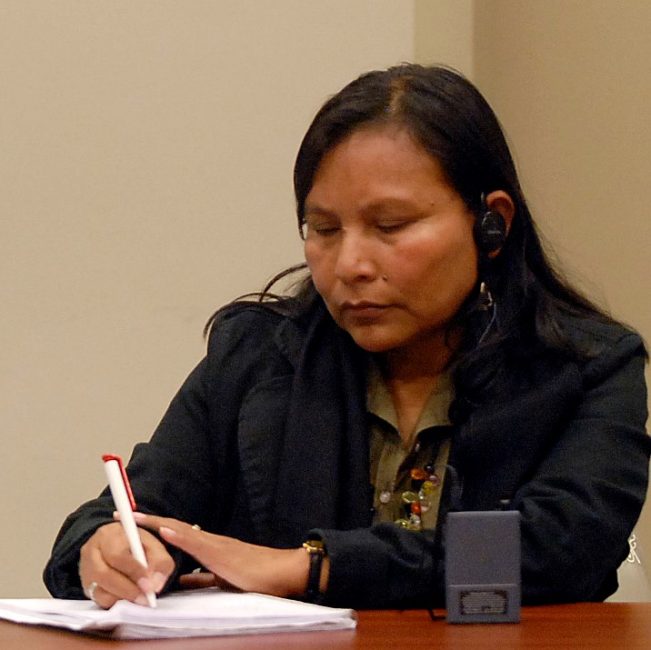 Florina Lopez, coordinator of the Indigenous Women’s Biodiversity Network from Latin American and the Caribbean

The publication is based on case studies from indigenous peoples living in countries as geographically diverse as Australia, Panama and Russia. It shares success stories and challenges faced by IPLCs in relation to biodiversity, conservation and sustainable use and development.

Florina Lopez, coordinator of the Indigenous Women’s Biodiversity Network from Latin American and the Caribbean, said: “This publication is an important window through which indigenous women can illustrate their own knowledge, experiences and initiatives that contribute to the objectives of the convention.”

Another contributor, Kamal Kumar Rai, from the Kirant tribe of Nepal, said: “For years when we went to get leaves, timber or grasses from the forest, we would always see the red panda. They were so peaceful, it made us happy to see them. They became a sign of good luck to us. Red pandas are endangered in the world, but in my community, the number of red pandas is increasing, and that’s because we protect their habitat.

“The role of indigenous peoples and local communities in protecting endangered and threatened species is something more people should know about; it is important that people respect our contribution to protecting this species. Sharing these examples is why this publication is so essential.”

Chrissy Grant, member of the Jabalbina Yalanji Aboriginal Corporation in Australia, said: “A publication like this is useful because it helps expose the issues communities are facing in managing, conserving and protecting local biodiversity. If more people know about these issues, then they understand more about what we do and why. It’s also important for us to make decision-makers aware of the extent of the issues that communities are facing so these are taken into account in local, national and international policies and laws.”

The publication was a collaboration between the International Indigenous Forum on Biodiversity (IIFB) and the Forest Peoples Programme, with support by the Secretariat of the Convention.

Ramiro Batzin, IIFB global coordinator and executive director of SOTZ’IL, said: “The publication is a vehicle for safekeeping the traditional knowledge of indigenous peoples and local communities for future generations.”

Joji Carino, coordinator of the IIFB working group on indicators and senior policy advisor at Forest Peoples Programme, said: “Indigenous peoples have first-hand knowledge about the state of biodiversity on the ground: as users and managers or as actors against threats from land use conversion. Local Biodiversity Outlooks collects reports from the biodiversity frontlines and is a necessary complement to national and global data and reporting.”

Maurizio Farhan Ferrari, environmental governance coordinator at Forest Peoples Programme, said: “There are many case studies within Local Biodiversity Outlooks illustrating the vital contributions of indigenous peoples and local communities to local and global biodiversity. This is just a small sample of the many and diverse ways in which indigenous people and local communities sustainably use and protect their lands and resources; recognizing and supporting their actions is one of the most effective ways to safeguard the future of the world’s biodiversity.”

ALSO READ:  Finland may become first country in the world to ban coal

Its key findings include: