The deliberate efforts of the Federal Government to reduce the widening housing deficit in the country have received another boost. The acting president of Nigeria, Prof. Yemi Osinbajo, recently called for a Public Private Partnership (PPP) to bridge the infrastructural deficit in Nigeria and other African countries. 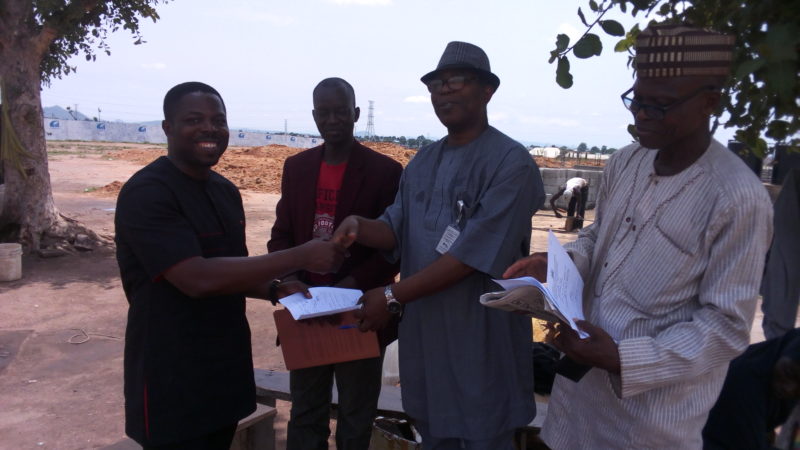 Propertymart Real Estate Investment Limited has taken the bull by the horn by entering into a Public-Private Partnership (PPP) with the Federal Ministry of Housing to construct houses for middle and low income earners in Gwagwalada Area Council of the Federal Capital Territory (FCT).

The Deputy Director (PPP), at the Federal Ministry of Housing, Arc Tonye Igbanibo, who recently led a team to inspect the 10-hectare stretch of land designated to the project, charged Propertymart to commence work immediately, towards catering to the teeming populace in need of shelter.

He noted that the Housing Ministry is eager to see the project commence and completed for the benefit of Nigerians who are desirous of having their own houses.

While saying that the land is good for all forms of housing units, the Deputy Director stated that the Housing Ministry would support Propertymart in any way possible, ensuring the success of the project in order to reduce the sufferings of Nigerians resident in the FCT.

“We are waiting for you. You have seen the place and we are there to support you so that work can commence here immediately,” Arc. Igbanibo stressed.

Deputy Managing Director of Propertymart and head of the PropertyMart delegation, Mr. Deji Fasuwon, disclosed that his organisation entered into the partnership in order to enable middle and low level income earners have houses of their own at affordable prices and that the company went further by putting in place a suitable payment plan which will invariably help reduce the housing deficit in the nation.

He said: “This project is a direct partnership with the Federal Ministry of Housing in their plan to offer affordable mass housing.

“We realise that there is so much housing deficit in the country and the Federal Ministry of Housing is trying as much as possible to ensure that these houses are available to Nigerians out there.

ALSO READ:  Lagos Land Use Charge Law: The angst of a disappointed public

“The government cannot do this alone by themselves, and that is why they have called on private developers to join them in ensuring the vision of the government is achieved.”

On the type of housing units to be constructed on the piece of land, Mr Fasuwon said: “We are planning to have different types of housing units, starting with bungalows, which will be very affordable to the people so that they will have something they can call their own. We are starting the project with two-bedroom bungalows.”

He disclosed that Propertymart has decided to make the payment arrangement simple and flexible so that many Nigerians can participate.

Mr Fasuwon added: “We have different payment arrangements for prospective beneficiaries. With as low as N75,000 or even N50,000, one can participate. The requirement is to make the monthly payment for three months and, in the fourth month, you make a lump sum payment and then you continue with the N50,000 payment for a period of three years. At the end of the three years, you must have finished payment and then you own your house.

“However, if you have the bulk money, you are able to buy at a lower rate. If you pay outright now, within six months of obtaining the final approvals, we would have delivered your housing unit for you.

“We are also talking to primary mortgage institutions to help finance off-takers who are desirous of taking mortgage facilities so that the period that they will have their houses delivered will be shortened.”

The cost of each housing unit for those who will pay at once, according to him, will be N4.9 million.

He, however, noted: “But if you want to spread your payment for a period of 36 months, you will pay a little over N5.9 million.”

“However, the development has been segmented into various schemes, such that purchasers will be allocated into the different scheme based on the period of purchase and payment. The delivery of the first scheme which is based on outright payment will not exceed six months.

“At Propertymart, we build to standard, and this project will not be an exception. And in line with our objective, the design, layout and quality of delivery will be befitting to the environment and also add value to our clients’ investments” he said.

He assured that, within six months, the first set of bungalows would be delivered to those who paid outright and the project will keep progressing until completion.