Members of the fisheries commission for the eastern Pacific assembling in Guayaquil, Ecuador need to prioritise initiating a rigorous recovery plan to address the collapse of Pacific Bluefin Tuna stocks and stabilising overall tuna fishing capacity that currently exceeds the optimal scientifically recommended level by at least 50%.

“Tuna management in the Pacific is currently totally inadequate to preserve the Pacific Bluefin tuna stock. Only a significant reduction of catches and stringent measures to protect juveniles can ensure long-term sustainability of this fishery,” said Pablo Guerrero, WWF’s Eastern Pacific Ocean Tuna coordinator. The stock is now critically low, having dropped 96% according to the International Scientific Committee (ISC) for Tuna and Tuna-like Species in the North Pacific Ocean and scientists of the Inter-American Tropical Tuna Commission (IATTC).

The 21 country and European Union members of the IATTC took initial steps to protect Pacific Bluefin in October 2014  in largely accepting scientific advice to almost halve fishing quotas for this prized but beleaguered fish. The IATTC further agreed that no country can exceed 3500 tons of catches in 2015 and that the fishing nations must establish a catch documentation system. 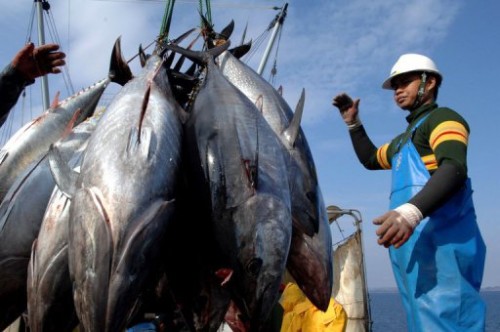 WWF strongly supports catch limits but demands closer monitoring of this fishery, especially of the catch numbers, to ensure that quotas are being respected. The completion of a revised stock assessment for this species is also necessary.

Japan, Mexico, the United States and South Korea are the major countries fishing Pacific Bluefin, while the main market is Japan.

WWF is also very concerned about tuna fishing over-capacity in the Eastern Pacific, which is becoming apparent through declining yellowfin and bigeye tuna stocks. Purse seine fleet captures about 90% of the tuna in the Eastern Pacific. The active purse-seine capacity registered in 2015 was 272,076 cubic meters, which greatly exceeds the capacity target level of 158,000 cubic meters of total volume recommended by scientists in 2002.

“We urge the IATTC to freeze the current capacity of the fishing fleet and work toward reducing the number of vessels authorized to fish for tuna in the eastern Pacific Ocean. This will also be in the best interest of the industry because it will address the problem of securing the future of tuna fisheries in the region,” said Pablo Guerrero.

IATTC scientists remain uncertain about the status of bigeye and yellowfin tuna due to current levels of fishing mortality exacerbated by the rising trend in the number of sets on Fish Aggregating Devices (FADs), and also due to a possible increase in fishing operations in the EPO. WWF urges the IATTC to monitor this situation closely and be prepared to implement stronger measures to conserve the stocks.

WWF is also urging IATTC to adopt conservation measures to limit fishing mortality of silky sharks in order to rebuild the stock of these sharks in the region, and also to totally prohibit the removal of fins at sea, requiring instead that sharks be landed with their fins naturally attached. IATTC members also should adopt the scientific recommendations on best practices for handling manta rays aboard purse seiners.

Other measures WWF is calling for include the provision of additional data on movement of FADs and the implementation of the use of FADs without any entangling material deployed beneath them in order to reduce by catch of sea turtles and sharks.

Tuna is one of the most valuable fisheries in the Eastern Pacific Ocean, supporting a billion dollar industry that sustains the livelihoods of tens of thousands of people and contributes to economic growth and social development in the region. “It is vital that member states of the IATTC expand their commitment to the responsible management necessary for sustainable levels of tuna stocks while ensuring a healthy long-term shark population at the same time,” added Pablo Guerrero.