Together with 886 citizens, Dutch non-governmental organisation (NGO), Urgenda, on Wednesday June 24, 2015 won a climate liability case against the Dutch state. The plaintiffs argued that the Dutch state neglects its duty of care towards its current and future citizens by not reducing CO2 emissions quickly enough to avoid catastrophic climate change. They asked the judge to order the government to reduce its CO2 emissions with 25-40 % in 2020, the percentage that science and international agreements tell us is needed if we want to stay below the 2 degrees threshold. 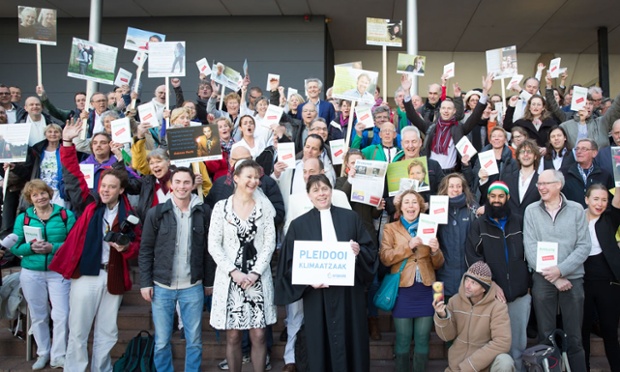 In what appears to be a ground-breaking verdict, the judges agreed fully with the arguments presented by the plaintiffs and stated that the Dutch state has a duty of care, under Dutch tort law, to reduce its C02 emission to 25% in 2020.  The court ruled that Urgenda had standing and that the State acted unlawful towards Urgenda, representing 886 citizens, under national tort law.

The court used European human right standards, such as art. 2 and 8 of the European Convention for Human Rights, the precautionary principle, the UN Framework Convention on Climate Change, and the treaty of the European Union to interpret the ‘equity’ principle of the Dutch tort article (art. 6:162 Civil Code) and concluded the Dutch state liable for a tort of negligence towards Urgenda.
The argument of the State’s defence, that climate policy is a matter of discretion for the executive power, was brushed aside when the court appealed to the protective logic of the rule of law and separation of powers: the judiciary’s rightful place is offer its citizens protection when the executive exercises its power in such a way that endangers the wellbeing and human rights of its citizens, and this includes the negligence of a government refusing to take timely climate action.
Dutch activist, Femke Wijdekop, wrote in a blog: “Today was ‘judgement day’ and I what I heard in that courtroom exceeded my hopes and expectations. We, co-litigants, and the defence of Urgenda were amazed by the boldness of the court; and I was deeply touched that something really seems to be changing in the world if a court, which could have easily have hidden behind arguments like ‘the discretionary power of the executive to determine climate policy’, ‘the relative small contribution of the Netherlands to the global emission problem, thus refusing to establish proportionate liability’ or ‘the lack of a strong enough causal link between the actions of the Dutch state and the future damage caused by climate change’ – let alone simply refusing to grant Urgenda standing! – that with all these arguments present, the court made a bold decision to take responsibility for its duty to acknowledge scientific facts, apply the law and do justice in this matter of extreme societal and environmental importance.
“For me it was a moment in which my idealism touched ground and merged with the hopes of the other 100 co-litigants present in the room, (some of which held hands and many shed tears!), which were confirmed and ‘mirrored’ by the words of the judge who agreed with our most important grievances and demands. Such was the surprise that Urgenda’s lawyers had to pull themselves together afterwards, overcome with emotion and relief – TV news images later showed their teary faces and yet none of them really tried to hide their tears: they were proud to admit that they had put their whole heart into this case – in what they described as ‘the case of their lifetimes’. I cannot help but think that some of this wholeheartedness rubbed off on the judges in this rightful judgement.
“Regardless of whether the State will appeal against the decision, this already is a huge victory for climate activists and environmental lawyers all over the world. It gives such encouragement and sound legal arguments to NGO’s in other countries, to start similar class actions on behalf of a liveable environment for current and future generations. It is my wish that this precedent will be followed by many more similar cases in other jurisdictions, forming a ‘ius commune’ on climate justice, and that other lawyers and co-litigants will dedicate themselves as wholeheartedly to these cases as we did here in the Netherlands on this historic day.”