Robert Guimaraes Vasquez, a leader of the Shipibo-Konibo indigenous people in Peru’s Amazon, is in London campaigning against deforestation and human rights violation in the bid to highlight the destruction of his people’s traditional lands by an international agribusiness group and member of the RSPO (Round Table for Sustainable Palm oil), a global body that certifies that the production and trade of palm oil is sustainable and respects human rights. 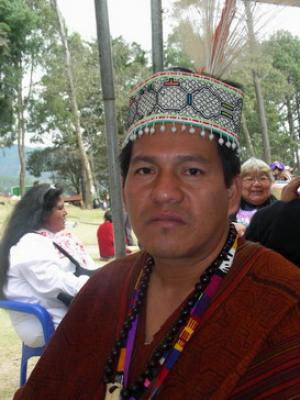 “We don’t understand how it’s possible that a member of the RSPO can be violating its own environmental rules and human rights commitments. The community is preparing a formal complaint,” said Mr Guimaraes.

The case concerns the Shipibo community of Santa Clara de Uchunya whose lands were acquired by a Peruvian company, Plantaciones de Pucallpa SAC (one of only two RSPO members in Peru) in 2012 in an undisclosed deal with the regional government of Ucayali. The community only realised when the first bulldozers began destroying the forest. Determined community resistance, including confiscation of company machinery and occupation of the lands combined with continuous lobbying of local authorities and central government, finally resulted in a high level investigation in August 2015 by the Ministry of Agriculture.

On the 2nd September, and in a historic victory for the community, the Ministry of Agriculture ordered the immediate suspension of all operations. The judgment determined that the deforestation had been entirely illegal as none of the environmental permits required for forest clearance had been issued. To make matters even more embarrassing for the government, all conversion of primary forest, an estimated 80% of the affected area, is expressly forbidden in Peru.

The damage however had been done. Today, only 25 hectares, or 0.3%, of the parcel of land formally acquired by Plantaciones de Pucallpa in 2012, remained standing. In just three years, over 5200 hectares of Santa Clara’s ancestral forests had been destroyed.

Local activist Washington Bolivar describes the impact on the community. “Our lands have been devastated, all the forest is gone, and the streams are completely churned up and blocked, there is now only one stream we can still use for clean drinking water”.

What the Ministry of Agriculture failed to highlight however was the central government’s own collusion in this destruction. The Peruvian government is legally required to ensure that the traditional lands of indigenous peoples, like the inhabitants of Santa Clara, are duly recognised. However, despite continued demands for resolution of their land rights over decades, Santa Clara is one of at least 1,174 communities in the Peruvian amazon whose demands for full legal recognition of their lands remains pending. AIDESEP, Peru’s national indigenous organization, estimates that in total, approximately 20 million hectares of indigenous peoples’ lands in the Amazon remain unrecognised in Peruvian law. This failure has been identified by a recent national level study compiled by AIDESEP and FPP as one of the key barriers preventing Peru’s government from meeting its target to reduce deforestation to zero by 2021.

The failure to recognise these lands and to ensure adequate safeguards were in place meant that in 2012 the Regional Government of Ucayali sold Santa Clara’s  lands to Plantaciones de Pucallpa. Today, the village, which is home to over 500 inhabitants whose subsistence livelihood depend almost entirely on hunting, fishing and gathering of forest resources, formally holds title to only approximately 200 hectares of land. Community members explain how this is already inadequate to meet their basic farming needs.

Mr Bolivar lays the blame for the situation squarely at the feet of local government. “There is only one party to blame, the regional government of Ucayali who sold off our lands without even speaking to us.  Only when we started protesting did the company and the government officials try to sweet talk us but it is too late, there is nothing to discuss. Our demands are simple, we want the company to withdraw immediately from our lands and held to account for the destruction it has caused, we want measure to regenerate the forest and compensation for the community,” he says.

Ultimately, the community is demanding resolution of its longstanding land issue and filed a formal application for a land ‘extension’ in March 2015 to encompass the remainder of their traditional lands that have now been designated as a forestry concession. Until these rights are recognized they highlight that the deforestation of their lands as it gets sold off for logging or palm oil or invaded by land grabbers is likely to continue despite their efforts.

Plantaciones de Pucallpa is one of many companies registered in Peru which recent investigations have exposed are actually part of a complex network of companies that appear to be effectively controlled by Dennis Melka, a businessman who founded the Malaysian agribusiness company Asian Plantations whose operations have been similarly controversial in Sarawak, Malaysia.

Holding those responsible to account is hampered by a model deployed by the Melka group in both Peru and Sarawak. This is based on multiple layers of shell companies and the registration of many in offshore tax havens where the identity of investors and owners is concealed. In the case of Plantaciones de Pucallpa, the holding company is United Oils Ltd. SEZC registered in the Cayman islands.

“The complexity of the supply chain of a commodity like palm oil means that consumers and even buyers are not even able to trace the origins of their palm oil. We know that Plantaciones de Pucallpa is an RSPO member but who really owns and controls this company? If we are not even able to find out who is really behind this forest destruction then how do communities like Santa Clara hold companies like these to account?” said Tom Griffiths of FPPs Responsible Finance Programme.

Challenging the deforestation has not come without its consequences for community members. Leaders like Mr Guimaraes and Mr Bolivar have been subjected to continuous threats.

“I get death threats all the time, my life is in danger and I have to move from one place to another. I live in fear, there are always people who follow me and I get threatening calls on my phone. They even threaten my sister”.

Mr Guimaraes highlighted that this is a problem for all indigenous peoples in Peru’s Amazon and particularly those in Ucayali. This came to international attention in 2014 with the infamous case of Saweto, four indigenous leaders, including the prize winning Edwin Chota, struggling to secure a land title for their community were killed by assassins linked to a powerful logging mafia with interests in Saweto’s lands.

“It is good that there is an outcry and that institutions declare their solidarity but human rights defenders need the support now, we don’t only want the awards when we are dead. In addition, in spite of the high profile of the case of Saweto, nobody has been sentenced. The message for us is clear. In Peru, there is total impunity for those who kill indigenous people.”

Mr Guimaraes will be speaking out in an international event taking place in London about commodity supply chains, deforestation and human rights in which major global agribusiness operators and policy makers will be participating.

Mr Guimaraes will be in London between the 2nd and 4th November.